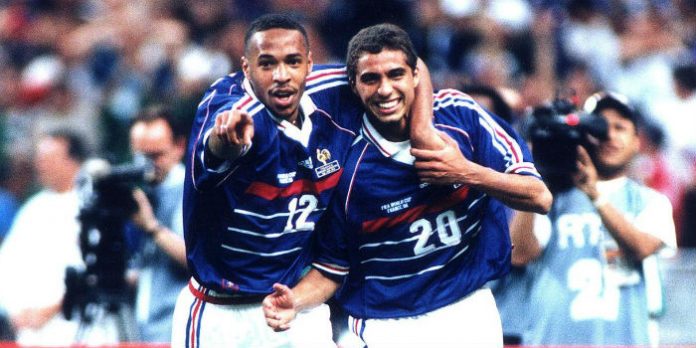 Arsene Wenger believes Thierry Henry should be granted the opportunity to draw a line under his glittering playing career with a final appearance for France in a proposed friendly against Brazil.

The 37-year-old quit Les Bleus in the aftermath of his country’s disastrous showing in South Africa in 2010 before embarking on a four-and-a-half year stint in the MLS which came to an end on Monday.

Suggesting that the French Football Federation hung Henry out to dry in 2010, following his involvement in France’s decisive goal in the infamous World Cup play-off against Ireland, Wenger said he agrees with a suggestion in L’Equipe that the governing body owe him a chance to bid farewell to his countrymen.

“I think that is the minimum the French Federation can do,” Wenger told his pre-Southampton press conference.

“After what happened with Ireland in the qualifiers, the situation was not handled too well by the Federation. I don’t think the feeling between Henry and the Federation was good at the time and I think they owe him that.”

Wenger’s words have been backed up by ex-Gunner Emmanuel Petit, who launched a vicious attack on the FFF and the French media for the way they treated Henry.

“In England, they’ve built a statue of Thierry,” he told Sports.fr. “That means a lot. He’s adored there. It bothers me.

“What can we reproach Henry for? His handball against Ireland? He helped France qualify for the World Cup in South Africa. He has done nothing.

“France is hypocritical and cowardly. Sometimes I think that if we’d been overrun by the Germans, we’d be better run.

“He’s not hated but he’s certainly not loved. He got screwed by the French press after his handball and has since not spoken to the French media.

“In France, he has no collusion with the press, so what? Perhaps because he was not smiling when he scored for les Bleus! Well, that’s what I hate in this country.

“I have great difficulty with the French, I have never seen such arrogant, smug, lying and hypocritical people.”

Henry won the World Cup in 1998 and the European Championships in 2000 before helping France to a second World Cup final in 2006 where they lost to Italy on penalties. He was also voted French player of the year five times, taking the gong in four consecutive seasons between 2003-2006.

UPDATE – Petit’s comments have caused quite the stir in the French media – particularly the German invasion bit – and he’s now claiming his words were twisted.

BONUS READING – fantastic extract in the Guardian from a recent interview with Henry which is set to appear in the upcoming eddition of the Blizzard.

What about an Arsenal testimonial or an appearance in the Emirates Cup next year?

Even better than a testimonial was the fact he got a statue outside the Emirates before returning on a competitive level to score THAT goal against Leeds. I doubt Thierry feels like Arsenal owe him anything.

Also, if he has a future as a coach it could be a bit odd throwing him a testimonial…

Would it be odd? Bergkamp got one and we all hope he’ll return in a staff role at some point.

That goal is among the top three goals I’ve seen live at the Emirates. Possibly even number 1 although it is hard to top the Arshavin goal against Barca and (for comedy value) the Fabregas 11 seconds goal against Sp*rs.

Just a friendly. More like a tournament, its what i say.

I read the article in the Guardian yesterday, great piece – good shout Blogs!

Yes he does Arsene, yes he does

Petit not holding anything back there!

Don’t beat around the bush Emmanuel. Tell us what you really think! Haha

Strong words by Petit.
I actually like the French.
But the way they treated Thierry was really disgraceful.

Petit’s words were certainly not petit!

Me So Hornsey
Reply to  Arsene's Zip

He really doesn’t like the French does he? Considering he’s French.

Personally, I think the the ‘overrunning by Germany’ part was a goose step too far.

He really overstepped the Deutchmark..

the only sam is nelson
Reply to  Me So Hornsey

I know, why did he feel the need to reich all that muck up again?

I think a more fitting tribute would be an Arsenal testimonial.

Yes he isn’t currently a player, no he doesn’t quite qualify by the normal criteria, but I think being the top scorer in our history and being the talisman for arguably our most impressive side means we can make an exception.

Henry’s last appearance should be in an Arsenal shirt, at the Emirates, cheered on by 60,000 Arsenal fans.

The Invincibles vs. France ’98. Anybody?

I’d love to see a Vieira vs Vieira showdown. And afterward we could sign ’em both up.

Class of Invincibles vs Henry’s XI!
Henry plays both sides in each half. I would love to who would be in Henry’s XI.
#goosebumps

They’d basically be the same teams.

The french/henry 11 would have zidane though…

Those quotes by Petit are absolutely hilarious 😀

Also, I’m going slightly crazy thinking of Henry becoming a Youth Coach or something like that. Just to have him back would be amazing!

Lol, I would like to see Petit saying those same words about being overrun by nazi Germany, looking at a veteran in the eyes.

The point Petit was trying to make was that despite the European Allies winning both wars, and hence Germany having to pay reparations to the winners, particularly after the first one, Germany, as a nation, is far ahead of its neighbours in almost all aspect of development. In context of football, look at how the German media handled 12 years of under performance (2002 to 2014) by the German National team. Did you hear a peep? Compare that to the furor raised by the French media insisting on making a mountain of a mole hill out of almost every event… Read more »

He didn’t say in WWII. France has been almost overrun by Germans more than once, you know.

Oh please, let’s all stop pretending to be stupid for a moment.

After what happened with Ireland in the qualifiers, the situation was not “handled” too well.

Not to be picky but Petit does know the French were actually overrun by the Germans, they had to be liberated by us and the Americans … Cheese eating surrender monkeys and all that

Ben
Reply to  Gandalf the Gooner

To be honest, I’m not surprised!
If it wasn’t for the channel (and group effort of good people) we probably would’ve been too.

Would Thierry want to play a few minutes even? he’s so intense and dedicated to playing football I don’t think he would like the idea of a few minutes on the pitch after all this time?

I love seeing Thierry in the crowd at Arsenal games, gets me emotional, seeing him back at the club in a coaching capacity of some sort would be absolutely incredible. What a man…

Was born a Gooner

Is Maureen french?
…
And I saw this link somewhere on facebook : http://lm.facebook.com/l.php?u=http%3A%2F%2Fbit.ly%2F1rX9KXI&h=VAQGYGTy8&enc=AZNJVAGoKLgzY_ueWczfYLQHcN098eiw8UOPMA974qKD4khBwj098gvrGtnSJQ__33qdQATI-UhIc-1uOfWh4zfUTXO_wMz0va6m9sCnwH_4qPqlxyovVuLAPSTyhcSN3Wpw92pi7yl4lrc-r41qz1cU&s=1
…
Before you click… The source is Goal…

Why would there be any apathy against Henry in France? Anything I can think of was that idiotic episode in South Africa and I thought Henry’s role in that was negligible and that handball was a one-off incident which happened in a split second. Henry never had a dirty streak, the most you can say is that he was highly competitive. Helping your country to qualify, even though you’ve been to two World Cup Finals and won one, says more than enough about Henry’s love for his country. Most people are lucky if they’ve ever been to a WC, let… Read more »

Blogs, it is true Petit’s words about the Germans were twisted. Even your translation of that sentence is inaccurate.

-> Sometimes, I think to myself that France having been invaded by the Germans, we should be better run today.

He’s not saying Germans running France would be better, he’s simply saying French authorities should be doing a better job.

Titi well played in the big years of footie