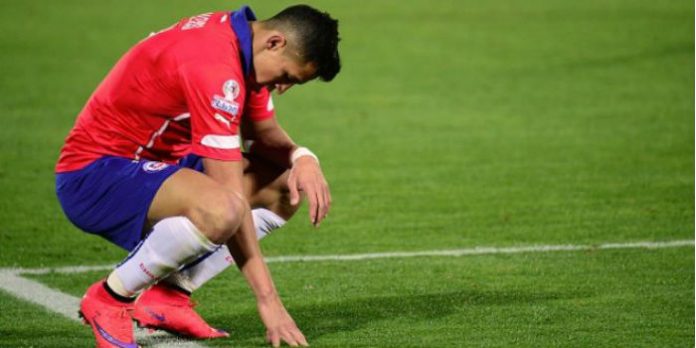 While his teammates were walking the catwalk outside the Emirates, Alexis Sanchez was back on the pitch at the Copa America as Chile took on Mexico in an entertaining encounter that saw six goals shared evenly.

Mexico took the lead on 20 minutes through Matias Vuoso’s close range finish only for Arturo Vidal to level things up inside 90 seconds with a fine header from a corner. Raul Jimenez’s restored the visitors’ lead seven minutes later with a looping header that beat Barcelona keeper Claudio Bravo at his near post before a third header, this time from Eduardo Vargas, ensured parity at the break.

Ten minutes into the second half Vidal, latching onto a through pass by Alexis, was hauled down in the box. He dusted himself down to net a second penalty in successive games to take his Copa America tally to three. Having finally grabbed the lead Chile promptly surrendered their advantage as Vuoso burst through the defence to nudge his second past Bravo.

Alexis thought he’d won it for Chile on 80 minutes when he pounced in the box to tap home from close range only for the linesman to judge the Arsenal man offside. If he was, it was only by a matter of inches.

If you’re in the UK, you can watch highlights of the game on the BBC.

Chile next face Bolivia, with both teams on four points ahead of the final group games on Friday. David Ospina will be in action on Thursday when Colombia take on Brazil.

been taking too much drugs lately.

if he wanted alexis would’ve run back to the emirates from chile for the kit launch then sped off back to chile just in time for kick off then score a hat trick, cover more ground than anyone else and not even get tired. he is magic.

I hope Chile don’t go far, even though I would support them in this competition. We need the beast to have a rest.

do they have specsavers in Chile?!

As of June 18th, Alexis has an unknown muscle problem on his right leg and is back on practice but doing light work on his own. May be on the bench Friday against Bolivia.
I found this article on a Chilean newspaper 🙁