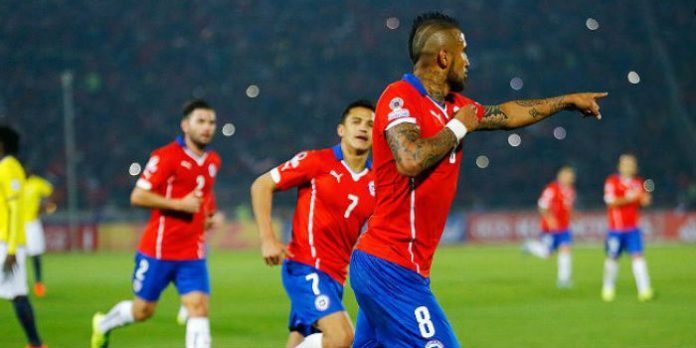 In the first of what we suspect will be a very half-arsed ‘series’ that keeps one eye on the Copa America, we bring you news of a win for Alexis Sanchez’s Chile.

Our striker’s home country is hosting the 44th edition of the CONMEBOL competition with 12 teams set to battle it out in nine different locations.

It all kicked-off last night with Chile beating Ecuador 2-0 in Santiago. Arturo Vidal, fresh from being shite for Juventus in the Champions League final, opened the scoring from the spot on 66 minutes before Eduardo Vargas sealed the win late on. The hosts were then reduced to ten men when Matias Fernandez was sent off for a second yellow with two minutes left.

Alexis played the full 90 minutes cheered on by his two dogs, Atom and Humber, who watched from a special kennel on the touchline.

They particularly enjoyed this dribble.

David Ospina is the other Gooner set to feature. He’ll be in goal for Colombia against Venezuela on Sunday night.

1. Only four Arsenal players have featured in the Copa America prior to this tournament.

2. Edu scored his spot-kick as Brazil beat Argentina on penalties to lift the trophy in 2004.

3. Gilberto captained Brazil to victory in 2007. On returning home he learned that he’d missed out on the Arsenal captaincy to William Gallas. What the f*ck Arsene? Seriously.

4. Julio Baptista scored three times in the 2007 competition, including in the 3-0 win over Argentina in the final. None of the goals were overhead kicks.

5. In 1999 Nelson Vivas was sent off for a two-footed tackle on a pitch invading chicken that had been let loose by Uruguay fans. As his team strolled to a 2-0 win, Nelson roasted the offending bird and served it to his teammates at full-time as an apology. It was apparently delicious.

I hope Sanchez returns fit and ready for the new season in which we beat Maureen’s Chelsh*t to the EPL title and of course retain the FA cup. Oh sorry The Emirates FA Cup…

Sanchez’ work rate is so high he only needs two hours’ holiday after the Copa America before returning to training with Arsenal. He’ll be fine next year. First order of business – win the Community Shield and watch that cunt Moronho cry to start the season.

FIFA bigwig (literally) on the run from the feds trying to blend in.

I guess it didn’t work.

It was Matias Fernandez who was sent off in stoppage time. Valdivia was substituted earlier in the second half.

I spent my time watching the very much un-meaningless friendly between Costa Rica and Spain. Or half watched it while working on my laptop. Anyway, it looked like Campbell started on the wing then moved to the lone striker position. He’s better out wide, in my opinion, and he works very hard, but he doesn’t quite have the quality for Arsenal. I know some of you will lynch me for saying that, “but what about Coquelin!”, blah blah blah. Wenger is always saying we are looking for players that will improve us, and Campbell is not that player, and neither… Read more »

D
Reply to  My arse

Er no, we always wish our boys well in whatever they strive to do. Good luck Alexis!

That dribble reminds me of the famous Zidane one in Spain where he fakes to the right on the edge of the box and 3 defenders fall down and then he takes it left and scores… Sanchez replicated it but forgot to shoot with his left foot.

Watching women world cup at the moment. Tragic I know. They gives the ball away, miss seaters and the next minute score a screamer. You never know what you’ll get. Exciting indeed

Why the need for back-handed compliments? Look here: “I’ve been watching the women’s WC and the quality of the games is actually quite good.”

The point is the games are exciting, not a quality level of football. Some have almost world class coaching, so they show individual skill. however I’ve found the numerous games I’ve watched since 2010/11 the quality seems to be that between bottom championship to league 2, though heavily weighted towards league two, only moments of pure skill knocking some games into that higher bracket. As for the back-handed sexist comment’s, equality only works when it suits… Replace ‘women’s world cup’ with something like ‘Angolan premier division’, would you still comment the same? Its derogatory because they are *Tottenham* compared to… Read more »

Oh an BTW, I enjoy watching the games regardless of skill level.

Pro Tip lads, spot a fitty and you get 50 points!

I understand what you’re saying, but you can’t judge the whole tournament by Canada’s matches. Speaking as a Canadian, both matches were tragic – littered with mistakes by both teams, and the referee was probably the best person out there in both games. Indeed, if Canada plays that way against the Netherlands we’re looking at going out in the group stages yet again. But take a look at some of the other matches. Ivory Coast vs. Thailand was terrific, full of exciting attacking play and some great goals. Even in the mismatches, it hasn’t been a case of one team… Read more »

By the end of the tournament..the blogs will just be
” Chile won. Sanchez is not injured”

That’s just fine by me, and probably every other Gooner as well.

I am always torn during these international tournaments. I like the Arsenal guys and I want to see them do well. On the other hand, my only real rooting interest is for Arsenal so a large part of me would like to see our players lose and get home and rested. We saw this year how success at the WC can have a bad effect on how the team plays.

I’m watching it closely. That wasn’t a backhanded compliment. It was a genuine critic just like we all did after that England versus Ireland. And yes the do score screamers. I follow closely England women team (well on TV, news and games. Not stalking anyone I swear!)I wish more people will watch and that will happen one day

There was a scary moment when Alexis was brought down and it took a few seconds for him to get up…he looked in pain, and i panicked. Next thing i know, he sprinted on the very next play and dribbled 3 opponents…..oh Alexis 🙂