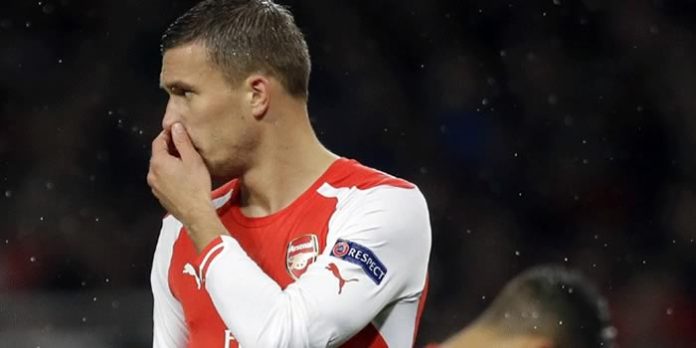 Lukas Podolski says he’s yet to discuss his future with Arsene Wenger as he weighs up whether to see out the final year of his Arsenal contract.

The striker, who earned his 125th cap for Germany as the World Champions beat Gibraltor 7-0 , spent the second half of last season on loan at Inter Milan after failing to hold down a first team spot at the Emirates.

Speaking after last night’s Euro 2016 qualifier, Poldi said: “I haven’t talked with Arsenal yet. (But) I will play football somewhere in the world.”

Back in June, the 30-year-old played down talk of a move to the Bundesliga and hinted he could stay in London.

“There’s bound to be speculation in the coming weeks, but at the moment it looks like I will be going back to London.

“Things can always change, but if needs be I will remain at Arsenal next season. They are a great club and I think I can help them. I can confirm there has been no interest from Werder Bremen.”

Everton are the latest club to be linked with Poldi, who also seems to be of interest to a host of clubs in Turkey.

Elsewhere, Mesut Ozil says Germany teammates Mats Hummels and Benedikt Höwedes could both shine in the Premier League; a competition he rates as the best in the world.

The defensive duo, who play for Borussia Dortmund and Schalke respectively, have been tipped for a move to England.

Speaking to Bild am Sonntag Ozil remarked: “I would recommend any player to come to England. The Premier League is the best league in the world. Here there are not only two teams fighting for the title but three or four and every team can beat any other team.

“The opponents never give up, even if they are 3-0 down. You are challenged all the time, as a player as well as physically. Mats and Benedikt have the qualities to make a mark at a big club here – if they want to, and that is obviously up to the individual to decide.”

Ozil also touched on whether Jurgen Klopp could enjoy life in England after the German coach called time on his spell at Dortmund.

“He is a big talking point over there – in the papers but also among the players. A few of my colleagues have asked me about how Klopp works. I haven’t had him as my manager but his record speaks for itself. He is a big personality and I am impressed by how relaxed, yet professional, he can be.”

What a life it could be if ozil can convince them both & arsene to bring them in the arsenal. Or is it a hint that talk is being held with hummels & benedikt?

I’ve not seen him much this season but I’m told that Hummels looked really poor.

In a season where Dortmund obviously underachieved big time, he was one of the primary culprits. Made stupid decisions to charge into the midfield to chase a hopeless ball time and time again, leaving his centre back partner exposed to a two-on-one. It happened over and over. No way any big club should go for him at the moment, though that never stopped some of them from doing it anyway.

Or a journalist asked him his opinion on those individuals and he gave positive reviews on them, as you do.

Watch a lot of Bundesliga and I’ve got to tell you Hummels has been terrible. He seems to forgotten he’s a Defender. Howedes is pretty physical so he could do well but don’t think he is better than what we already have.

Yeah because we don’t already have brilliant CB’s… hate to call fellow gooners names, but you’re a real Marouane Fellaini.

I love Ozil, hope He will help us win the EPL next season

Mesut was absolutely fabulous yesterday during the second half! The three assists (and one beautiful pre-assist) were the cherry on the cake!
As to Mats and Höwedes, maybe we shouldn’t read too much into what he says as to Arsenal, but yes, they’d be great assets.

lest we turn our team to bayern munich

Steamrolling our league and winning the CL? If we managed that in the PL then it doesn’t sound like a bad plan.

The 3rd assist was Ozil at his sublime best. If he does that with us and we don’t score some are screaming at him to shoot. I love him for it. He is a very special player and he plays for Arsenal.

Think I’ll have a ham on a bagel ( hammel sic? ) and eggs benedict for breakkie today.

You are as funny as a Ryan Shawcross Tackle.

Part of me died with that pun.

Poldi – 125 caps for Germany. How did he manage that with his work rate? In England he would be a legend with that many caps.

I hope he finds a club he can play for regularly, surely he will only warm the bench at Arsenal, with a few 10 minute games here and there.

Because you don’t need to run arrrraaand to be a good player.

Football fans, being fickle since 1864.

He’s a very good player, just not suited to our system.

He was very promising when he was younger (young player of the 2006 WC I think..?) but hasn’t kicked on. Sorry, but Poldi’s not a good player anymore, and that’s nothing to do with the formation he’s played in or the game time he’s given. He doesn’t have the drive for self-improvement and he hasn’t been able to adapt his game. His career will peter out a la Hleb, punctuated by the odd thunderbolt that serves only to remind him and us of what could’ve been. Bit of a shame but that’s the game. Great bloke, love him to bits,… Read more »

He has scored 48 goals – the same as rooney.

He took 20 more games but he largely plays from a left wing position and generally gets less minuytes on the pitch.
Plus he spent a lot of time on the pitch with Klose who hogged the goals.

Legend Rooney was allowed to pick his position and make everyone work for him.

As a season ticket holder and an Arsenal fan of 61 years I can honestly say. Ozil is an enigma, he can look pure class at times and at other times he can look a waste of the transfer fee. If he could produce his best more often then WOW

But at any other point, other people especially chelsea fans still think ozil is shit just because he didn’t assist too much for us like cesc the snake did for chelski. Does he need thousand of assist/goal to prove that he’s a world class? That’s just some bullshit that people trying to bring on to make him looks so bad. His sublime passes & moves had already proved he’s world class. If it’s not, let’s remind people on his long pass to ramsey for bellerin’s goal vs liverpool & a lot of his dummy, cheeky flick & ridiculous passes. Who’s… Read more »

Anyone else pretty desperate to keep hold of poldi? As an impact sub or in cup games his left foot would prove deadly… He loves afc too!

I wouldn’t say desperate but since he’s competing with Alexis and clearly not taking his spot,Poldi’s replacement would be doing likewise. A potential replacement would have to be better than Poldi but content with being 2nd choice behind Alexis. A lot of people rubbish Poldi, especially his work rate but we conceded many goals last season with our other supposedly accountable & hard working midfielders stranded up the pitch. He might be ‘limited’ but he’s a highly effective player. In games like the Chelsea home game & Monaco away he wouldn’t have wasted time trying to figure out how to… Read more »

As much as he loves inter milan?

No. Don’t be stupid.

yep….i am with you on poldi. I am one of those that will be very happy to keep him. he has his critics, and some might say rightly so, but its difficult to be consistently good when you lack regular game time. A striker needs confidence to thrive. whithout confidence, even ‘world class strikers’ becomes nothing (e.g. fernando Torres, Falcao, etc) unfortunately confidence comes from your manager’s show of faith in you plus regular game time. When you lack both like poldi, ….you will struggle, regardles of your individual talent!. He is one of those strikers caught in that vicious… Read more »

Perfect as a super sub really, in those games when we just can’t score & the other team has parked the bus, bring Poldi on as an additional striker, he will get a change and he will score. But that’s probably the only role he has left to play now

Would make a great striker for Everton.
Wouldn’t mind seeing him on loan there. Would take point off out competition and not play against us.

That’s what Chelsea always do (Lukkaku).