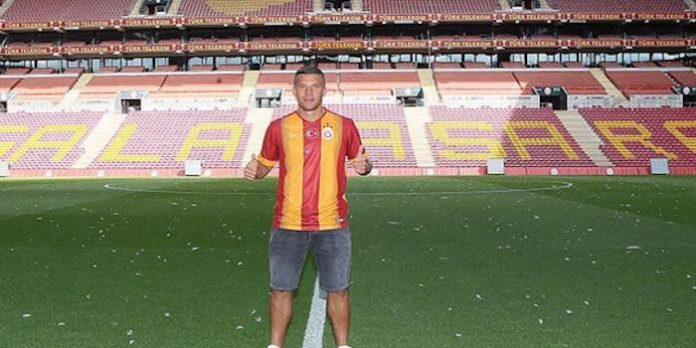 Arsenal have confirmed that Lukas Podolski is the leave the club for Galatasary.

The announcement comes after the Turkish club announced the signing from their end, and via his own Twitter account Podolski posted:

Podolski scored 31 goals for Arsenal from 80 appearances, and was a popular figure after his move from Cologne in the summer of 2012.

Farewell Lukas. May the hashtag be with you.

Space in the squad for a new forward? YES

#AHA
What a lively character.

Now have a rest…

A phrase which I now realise is virtually identical to what was written in the actual article. That’ll teach me to comment before reading the page properly, it’s made me look a right knob.

All that therapy is probably rubbing off in the opposite direction.

did he thank arsenal management or supporters? 😉

More importantly, did Wenger say goodbye to him?

Are still we going to send him a birthday cake?

I’ll never forget the goal he scored against Bayern, pushing over the world’s best fullback, then smashing one past the ear of the world’s best keeper from an impossible angle. Farewell Prinz Poldi, you will be fondly remembered.

Man, you have a gift for the fable. Please do creative writing…past the ear? That’s golden

Can we have another transfer please?…I am finding myself watching tennis!

Same here Paul. Dire time for football fans. WWC was fun but then suddenly it wasn’t anymore the fucking japs. Another major signing or we will all be going C’MON ANDY!!!

Racist and unnecessary. Please apologise to the many japanese fans who follow Arsenal who probably visit Arseblog.

All the best, Poldi.

I’ve no doubt that left foot cannon of yours will be the star of a Vine or two over the coming years.

Does the shirt no. 9 go to Alexis now?

I don’t want a striker who flopped in World Cup Final, Copa America Final and in the final matchday of Serie A.

I hope not, given that Copa performance. They should have put Tevez on instead.

Agree totally. The three dots were trying to say that.

Always easier to think that what we don’t have is better.

I suspect Alexis has his eye on Rosickys no.7 shirt.
I don’t hate the idea of Giroud taking the 9
I like the idea of a new 9 coming in too.
I need bacon..

All the best Poldi

Not good enough for us but i wish him good luck at Galatasaray!

Podolski fit to our system, because you compare him with Giroud highest goal looser.

He was definitely good enough. He just didn’t fit into AW’s new system. We bought him at a time of uncertainty where we needed to replace that dutch skunks goals.

i hope the number 9 is retired.. what a cursed number that is proving to be.. and 11.. the one who plays well but has more potential :p

If you wanted the ball to fall to anyone, when you needed a goal, it was Podolski. Shame he never fit our system. Good luck to him.

I will surely miss him, “podolski” the thunder shot shooter, he appeared 80 times for Arsenal and scored 31goals, you always delivered when we need u most. Thanks poldi.

That dutch cunt is also moving to turkey. Hope Poldi knocks his testicles off with a left footed shot.

Other than the confusing username, you’re pretty much on point. Funny how things worked out for us and him, after he accused the club on a lack of “ambition”.

I wonder who we’ll bring in to meet the German quota I assume we have at the club. Preferably half-English too, just to keep the FA happy.

lets be honest ere lads, its a good thing hes gone. he was what we needed when he came but not what we need anymore, sentiment a side hes one of many that should leave. You’ve gt players like ozil, alexis, cech, koscielny and then youve got podolski, arteta, szescney, gibbs. its my opinion but they arent good enough as squad players. then youve got wee lil lads like giroud who are good enough for the squad but not the first team. so heres the kind of team i want to see in the next 2-3 seasons Alexis – World… Read more »

Who is this World class player you talk about who can play three positions at once & is he available?

Who is this World Class fellow and how is he able to play in 3 positions simultaneously?

What does world class actually mean? It used to mean that you played in world cup teams, as it’s a world event, so Giroud and Mertesacker are both that and I doubt Coquelin will be out of the French team for long if he plays like he did last season.

So all of sudden Monreal has been bumped up to WC status and Gibbs not good enough for Arsenal!? Then you got Bellerin (1st season 19ys old) is WC, BFG who is a world champion isn’t….

Your short-term vision is rather impressive!

One of my favourite arsenal players, frustrating at times but fuck me he could finish, all the best poldi!!

Farewell. But £1.8m seems like a meager return. Surely we could’ve obtained more, no?

I was quite surprised also. If Wenger really tried I reckon he could’ve got about £5mil for him but truth be told with just one year left on his contract and a hefty wage bill I think Wenger just wanted to make some space in the squad as soon as possible. Shame Poldi didn’t really fit the Arsenal system but he still made a difference when he came on. Wish him all the best at Galatasaray!

It’s probably due to his wages.

Surprised at the fee, thought he’d be worth more

On paper he should have been a huge star at the Grove: a current German international with an eye for goal. But it just never worked out. Almost from the day he signed, Wenger seemed to dislike him, and he was never given enough of a chance to prove himself. It’s a shame for him that he wasted three precious years of his career going nowhere under Le prof. I think that there’s a story to be told here: things just don’t make sense.

But good luck to him: he’s a likeable guy.

Bro, how old are you then?

Agree to some extent. When everybody that counts was injured and Poldi did not start games, nobody could say he was on the bench because he doesn’t fit the system. There was no system during those awful games we lost. The second half of the season proves we can do without him but Wenger doesn’t like him as a player.

He lacked the movement and workrate for the wide role, and lacked any real presence when playing as the lone striker. I think AW saw him as a liability (defensively) in the end. The likes of Cazorla, Giroud and Alexis run their socks off every game, but I just don’t think Poldi had the stamina to play in such a fluid team.

He is a likeable guy alright Fats but I think Wengers reluctance to use him was understandable enough. Poldi could thwack a ball into the net better than most but too often he was just standing around doing not very much.

Me to, but I’m watching Podolski’s best goals….

Good luck Lukas! Best impact sub ive seen. Best shot ive seen too.
Also a very likeable guy.
Only fault he has is that hes lazy on the defensive side of the game, dont blame him for it either. Just not one of his skills.

Who do you blame for him being lazy then? His mum, dad, high school history teacher?

Great for Alexis but it worries me that he hasn’t had a rest yet.

Is nobody going to acknowledge the #aslan? Poldi – truly, you are the king of the left foot thunderbolt and social media. #aha #thesunalwaysshinesonpoldi

Farewell, and all the best to Lukas with the thunderous left foot!

Honestly, Poldi has a gift of connecting with people. “Today, I become a lion” – with that, he already has their attention. I hope he goes into the public relations field after football because he is really good at it.

All the best, Poldi

All the best poldi and you scored some important goals

I think Poldi was great for the cohesion of the newly assembled team from 2012/ bringing in Santi, Poldi, and Giroud. I think he helped the team a lot with confidence! Aha!

Also, he scored some brilliant goals for us! The one-two with Gibbs and Giroud were sublime. His strikes are legendary; it’s a pity he lacked that tiny little bit to be world class.