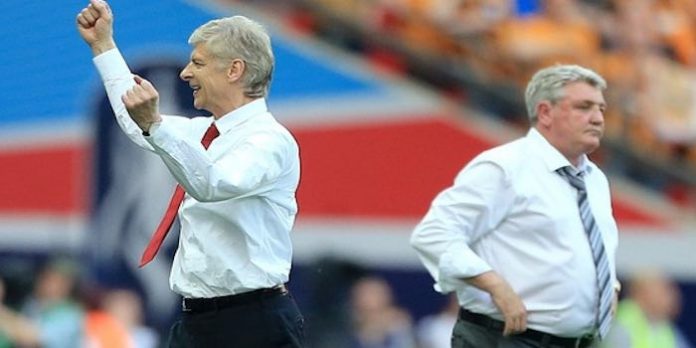 Arsene Wenger says that loan deals, like the ones done recently for Chuba Akpom and Isaac Hayden, are a way of completing a player’s education.

Both players have outgrown the underage level and need to play regularly in a competitive league to develop further as players. A season at Hull – who will be pushing for promotion – is the best way of doing that.

“There is a moment in your career where you are not anymore for youth level and not ready for the Premier League,” Wenger told Arsenal Player.

“I think in this period in English football, we lose players, because we have nothing really on the competition front to offer them. They’ve already played for two or three years in the under-21s and they don’t feel they move forward anymore if they don’t play in the first team.

“They are ready to play in a senior team and I believe that Championship level is a very good terminal stage of the education of a player.”

And Hull manager Steve Bruce has revealed his old pals act with the Frenchman played a part in getting Akpom in particular.

“I didn’t think Akpom would be available,” he said, “But I’ve always got on well with Arsene , he’s always done me a turn. That relationship helps now and again.”

Bruce has previously taken players like Nicklas Bendtner, Seb Larsson and Johan Djourou on loan from Arsenal, and with the latest two he becomes something of a Loan Ranger.

Except he needs one of those Budweiser horses.

Been saying it for 2-3 years now, but It’s only a matter of time before Isaac Hayden is in the first team & soon in my opinion. I even believe he will be our starting Cdm in a year or two, sharing that position with Coquelin for the next—— years. Glad he’s going out on loan where he can prove himself, hopefully Hayden can stay healthy(Which is the only thing that held him back last season) & get start plenty of games(In midfield, his best position). Of all the players that have gone out on loan this summer I only… Read more »

Based on my extremely accurate view of the future (my Fifa career mode), by 2020 the Gnab will be an 88 rated right winger on 170k a week.

And the Ox will be at City.

I think they’ve all got the potential to have a future with us. Gnabry has to regain his pre-injury form and Sanogo & Akpom have to transfer their ‘youth’ form into senior football. The question is ‘will they do that?’.

@Apostolos Dude. Serge has such a big future in this team, you won’t believe it when it comes to fruition. He was on the cusp of a breakthrough but for that knee injury whose specific details count as classified Intel. Anywyas I’ve been impressed with hayden and I thought he’d be cover for our Coq. The Gaffer knows best though.
COYG!

Hey I hope you’re right about Gnabry I really do, It’s just with Sanchez & Chamberlain offering much of the same as what he can along with the fact I think Jeff, and Yassin Fortune are better prospects up front(Or on the wings) I just don’t see him making the first team but I hope I’m wrong.

Honestly, Gnabry two years ago was exactly that what Jeff is now. A young, bright and extremely gifted footballer on the cusp of the breakthrough. I wouldn’t be too quick to write him off (even though he does have a long way to go).

Being out for over a year injured is always going to make a player look static.

But, looking at the current WBA line-up, Gnabry has a real chance of having a break-though season.

Let’s hope they stay healthier than Steve Bruce in that picture!

I like Steve Bruce. Or maybe it’s more that I always feel sort of sorry for him. Maybe it’s both.

Hands up all those who read the headline and started humming Pink Floyd.

Does the club get paid for these type of deals?

Tom thumb
Reply to  just telling it like it is

Depends on the deal,I think the standard is the club getting the player on loan pays half his wages,some more high profile loans can cost more like falcao to united loan

Lucas Sam
Reply to  just telling it like it is

It depends on the deal, some deals have a loan fee. Like for west ham, they had to fork out a loan fee for caporal jenkinson. The wage contribution is also another point of negotiation. And some deals have obligatory/optional buy for a fixed price at the end of the loan. You should try Football manager =)

There may well be a loan fee, and the club who signs the player covers their wages for the season.

Fingers crossed Akpom actually gets lots of game time, it’s not like he’s going there for the “challenge” of facing Michael Dawson and Tubby Tom in training.

Experience is a giant factor – knowing what you’re capable of against a set of opposition. I’d rate Michael Dawson and ‘tubby’ tom to score over Akpom, initially anyway, at Hull, at the Championship. Anyone should, really, given how unproven Akpom is.

Akpom’s loan deal is to quickly figure this fact out – how well does he fare against senior players, and what can he do about it. That’s what le prof means by completing his education.

Good luck and hope to see both back next season pushing for first team domestic cup games.

he gets along with arsene so I like brucey too

Honestly, Bruce is so big, he needs two of those horses just for himself.

He certainly needs some serious pre season training. Even more than I do !

Loan Ranger – LMAO Andrew… picture Stevie “SmashNose” Bruce in cowboy boots. Horse be like, fcuk this, you ain’t climbing my back!

Beckham went on loan to Preston. But it was only for a short time. Coq’s time at Charlton was well spent, in as much as he came back to us and stepped up several levels in about 5 minutes. But you have to question the wisdom of some of them. I think it depends almost entirely on the character of the player. For some it works but for others it just doesn’t. And they – the players – are not helped by being parked on the bench in the Championship or Lg.1 and waiting for a 5 minute cameo. To… Read more »

We should loan him a horse 🙂

It’d have to be a statue of a horse, a real one couldn’t bear the weight.

Or he could ride Fatgooner 🙂 sorry couldn’t help myself

I have no horses.

so Akpom wasn’t available until Bruce called and wenger said ‘yeah steve but only if you promise me this and that’.. Much different to sanogo’s which is like ..’hey Dennis, you are god. Grow this boy and don’t send him back until he’s like you .

Loved Steve Brucie Bruce in his interviews, shame he looks like a state school dinner lady these days, and he seems like a manager with the right ideas.
Glad Wenger has a manager buddy that will help out with our players education. Good hunting Chubbs!!

Think Steve Bruce’s waistline rules him out of the Arsenal job.