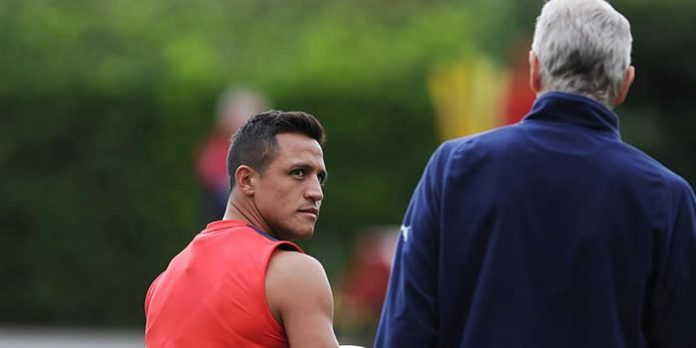 Despite yesterday not categorically ruling Alexis Sanchez out of Sunday’s game with West Ham, Arsene Wenger seems to have done exactly that at his press conference today.

The Chilean returned from holidays this week and the Arsenal manager wants to give him some time on the training ground before throwing him back into action.

“He came back in good shape and should be available to play in 10 days,” said the Arsenal manager, which could possibly rule him out of the trip to Crystal Palace, but it wouldn’t surprise us if he was involved there.

“He played a World Cup, played a whole season, the Copa America and cannot start the season.”

He also touched on Jack Wilshere, saying the midfielder was ‘down’ but ready to knuckle down make his way back soon.

“He’ll play with the same confidence and desire when he comes back,” he said.

Danny Welbeck and Tomas Rosicky remain sidelined but other than that there’s a clean bill of health before the season opener against the Hammers.

I don’t think wenger is going to be guilty of rushing him back. Alexis on the other hand has got different ideas. “Coming back in good shape” means he’s been doing his own preseason whilst on holiday! If he gets injured due to fatigue, I think the only thing to blame is alexis unique chance desire to have a ball at his feet and beat the opposition. What a fucking specimen

Unquenchable* not unique. But it will suffice

the picture up there… “10 days? Senor Wenger, por queeeeeeee”

Seriously, there is like no option to rush him. He was born ready.

I hope we are ready. West Ham have had a few competitive fixtures already so will be match sharp. The WH team that lost yesterday were nowhere near their full side.

Even when they played their full side they were shit against rubbish teams. They barely squeaked through their first two qualifying rounds and in their home leg against Astra they played pretty much the same squad that will play against us. I’ve got no worries at all for Sunday.

How do you know that?
Why not take over from Arsene Wenger

Is jenkinson going to play against us?

no, part of loan stipulations is that you can’t face your owning club.

plus West Ham had a stinker yesterday in the Europa.

No excuses for our guys; 3 points a must on Sunday!

My thoughts exactly, a long world cup, a full season and a full copa America. It it was any other player, no chance of that guy coming on so soon, but with Alexis, you start to think, it’s not impossible…… I love that guy’s energy

Yeah, remember Mertesacker’s comments that after the world cup a big issue was mental fatigue and finding that motivation again. I love the bfg, so its not a dig on him, but I can’t see Alexis struggling to find the motivation for another domestic campaign quite the same as others might after an international tournament

Your heart will be tested but nothing can break your heart!

Red beast of London is back!!

I can totally imagine Alexis starting a timer for 10 days, looking closely at it while telling Arsene “the clock is ticking, boss”

I think Alexis works so hard that he can do ten days’ training in 24 hours and be ready for Sunday. I’m sure after training is over he doesn’t bother using a car to get back home, he just sprints there.

‘Clean bill of health’, words not usually associated with us, isn’t it ? Come on you injury gods….we’ll offer you A mourinho head on a golden platter with a side of terry, if that’s what it takes to please you

10 human days but how long is that in Alexiseconds?

It’s sort of weird and unusual that its all attacking players out injured.

A completely fit defence and only 2 midfielders out. Is this the Shad Forsythe effect?

Sounds sensible to me, I just hope that now we have a big, competitive squad, he rotates alexis from time to time. For me that’s a better to prevent burnout than say making him wait another 5 days before coming back

Arturo Vidal has already played some preseason games with bayern though so maybe these Chileans are robots from the future.

Cliff – I hope not as this could be bad for humans.