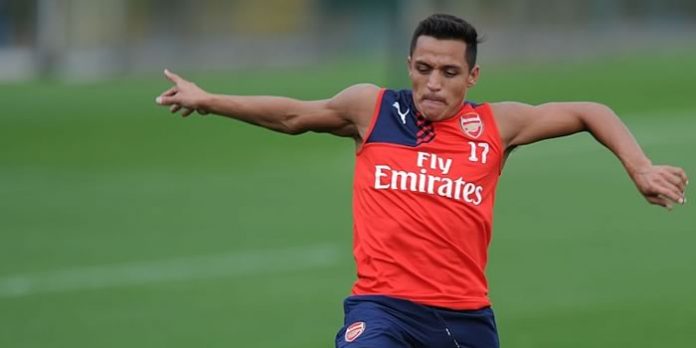 Despite the fact that he only arrived back in England this week after his summer holidays, Arsene Wenger seemed hesitant to completely rule out Alexis Sanchez from our opening Premier League game against West Ham on Sunday.

Ideally you’d want to ease him into some training, then gradually introduce him into the team, but this is the human dynamo, the whirlwind, the force of nature, the fusion powered footballing reactor that is Alexis Sanchez, so normal rules don’t necessarily apply.

“Alexis is back in training,” said the Arsenal manager, “but I don’t think he will be involved on Sunday, it is a bit early … maybe.

“We have to decide that at the end of the week, but I don’t think he will be involved.”

By all accounts he’s come back in good shape, probably down to the fact he spent his holidays running up mountains, building some new schools and hospitals with his bare hands, and doing fitness work on the beach.

There were also updates on Danny Welbeck and Tomas Rosicky who are both on what the boss calls a ‘progressive recovery.’

Your guess is as good as ours.

Return of the beast!

Did Wenger really call him Alex?

Twice. Alexanders get called Alex too! Its not unusual!

I am thinking of Alexis as a centre striker . If we try it and we succeed we will be champions in England and champions in Europe .

Can’t wait to see a forward trio of Ox – Walcott – Alexis. Will scare the daylight out of defences.

And with Ozil pulling the strings. Amazing!

We always count on “Ozil pulling strings” what about when “Ozil anonymous” ?? When more often than not we have witnessed the latter?

Some of these factors will decide the league not just some tidy CF upfront.

So can i pick him in my fantasy team already or not?

I’ve already left him on the roster… and captained him too. I figured it’s a safe bet he’ll try to score a hat trick from the bench before he’s even subbed on.

Hey drunkn and eyeliner… My friend and I just made a fantasy team for the first time.. We don’t have a group yet, any chance either of you have space in your group for two more? I figured I’d try the arseblog community first before joining a big reddit organised one.

You just have to laugh, don’t you? Absolutely ridiculous is this freak of nature.

Wenger at his Krypt best lol

I still can’t decide whether to put him in my Fantasy Premier League Team YET. Up until now I have had a very good feeling about Ozil. But now I keep switching him between Rambo and the Ox!! Don’t suppose Blogs wants to sort out an Arseblog League??

I’d be willing to pay almost as much for that as I pay for my subscription to Arseblog, so give it a thought.

Because you can only have 3 Arsenal players in your team.. and having Kane in your team last year so you dont get left behind pains you so much 🙁

We are not so different you and I

God help Wenger! I’m pretty sure that throughout his forcibly imposed holidays Alexis was calling up the boss to see if he could come back early at least three times a week. Then when he found out that Le Prof spent most of his hols on the training ground, poor Alexis must have felt like he’s been unfairly punished. Wenger may have to play him just to avoid receiving transfer request! I kid of course, but my goodness does that man love playing football. I can imagine him right now always running drills in eyeshot of Arsene, desperate to start… Read more »

I taught a kid this last year who I seriously think only came to school in order to play football with his pals. Every day before break and lunchtime, he’d sit quivering in his chair, waiting for the bell to go so he could rush outside to have a kick around. He had to have an operation in February, and I swear that he was actually starting to suffer from clinical depression because he couldn’t play. His mother made me promise that I wouldn’t let him out so he didn’t burst his stitches, but as he looked at me every… Read more »

My roundup of last summer’s business.

Barca – Sell Alexis and the pay twice the amount for Suarez from Liverpool.

Liverpool – Spunk all the money away.

Man U – Do a ‘Veron’ and break the British transfer record for Di Maria and then sell him for a £15m loss within a year. After many attempts, he did hit a beauty of a 60 yard pass A ball boy was mildly impressed.

Arsenal – Wenger (like a chuffing genius) convinces Alexis to come to Arsenal at the WC.

Alexis is just a workaholic. He just runs and runs, I bet he spent half of his holidays working on his fitness. O.T. I am gutted for Wilshere after Wenger confirmed he will be out for weeks not days. I thought the story was fake after I heard it was from the Mirror. I just want 1 injury free season for him. I still believe he could be world class. I am truly sad.

Can anyone imagine Alexis having a game as anonymous as Hazard last Sunday? First name on the teamsheet – every time.

The sooner the better the beast.

Apropos of very little, the US site for ESPN has a pretty great 16-bit GIF of Wenger fighting Mourinho that I would post here if I knew how.

Here is a URL to the GIF.

I can imagine wenger lying down in a beach in Rio during the WC and he sees a certain kid running around the beach with the ball. On further investigation someone in the beach probably told him it was a kid named ‘Alex’.He then went on to tell dick law to sign the lad.
Turned out we got ourselves Alexis.

his energy is simply unbelievable …. Went to the world cup , played close to 50 games last season and went On to win the Copa America . According to Wenger( break his words), Alexis just came back in few days and he’s already disrupted his plans For the opening match … Ladies and Gentlemen …. THE BEAST