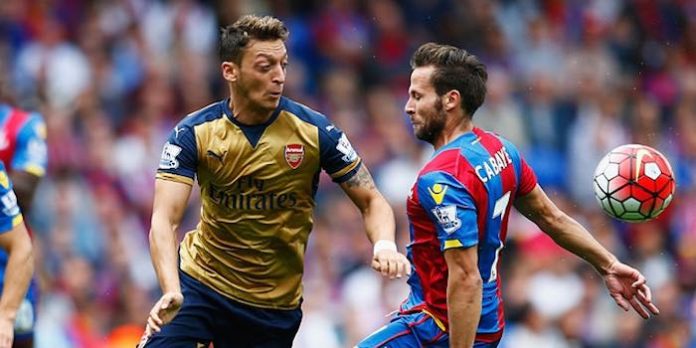 It’s 16 days since the summer transfer window closed and 105 until it opens again in January…so naturally there are rumours about the future of Mesut Ozil.

What nonsense have the press concocted this time? Well they’ve decided that our World Cup winner could be off to Turkish side Fenerbahce in the summer because his agent says they’re quite a big club.

Here’s what representative Erkut Sogut had to say to local publication Tavkim (translated by Sport Witness) about interest from Istanbul: “If he were to leave, Fenerbahce would be an option. After all, they are one of Turkey’s biggest clubs.”

“I don’t know what Arsenal would give as an answer right now, let’s look at it again at the end of the season.”

Arseblog News can’t speak on behalf of all Arsenal supporters, but we’re pretty sure you’re thinking what we’re thinking…that the response would probably something along the lines of:

Now granted, Ozil may well end up at Fenerbahce at some point – he’s a self-confessed fan of the club – but we’re pretty confident that it won’t be anytime soon. In the summer Arsene Wenger dismissed out of hand any suggestion the 26-year-old could leave the Emirates after apparent interest from Juventus.

A player of Ozil’s quality and in the prime of his career would be absolutely mad to go to the Turkish league. It’s impossible to take this seriously.

I’ve been a big big Mesut’s fans for 3 years now and yes, if he leaves to Turkey at his prime, then i’ll be extremely disappointed and frustrated with him…

If we can’t win the epl or ucl, he probably should go somewhere else. Won’t blame him.

Not worth cracking out the poo-ometer on this one blogs? 😉

We’re hoping to have it fixed soon.

What are they smoking over there at agent’s house?

A shisha. He’s invited Jack round.

His agent has a part time job of being a stand up comedian.
And apparently he’s quite good at it.

In other news, Alexis Sanchez’s agent says the Chilean is set to join Orlando Pirates of the South African Premier League in the next transfer window.

Yay! Now I can finally spend my money on watching real quality. *Heads out to buy new vuvuzela*

Özil should not do what Shaqiri just did.He has the best support and opportunities here at arsenal.And most of the players that leave arsenal haven’t done any better. Let’s hope its just his agent trying to get him a new bumper deal!

Join Stoke? I totally agree. Anyone who does that is behond help. Hopefully he sees that playing for Stoke would be a backwards move in his career. Perhaps Fenerbache then?

Course they have.
RVP won the league
Clichy and Nasri have
Fabregas won about a billion things at Barca and then the league in England.

I was thinking it Enyimba football club Aba, in the Nigerian league……
Hahahahahahaha

The report is 10 years ahead of time. He’ll have to choose between New York Red Bulls and Fenerbahce in the 2025/26 season.

Nope, the Vancouver Whitecaps have already signed pre-pre-pre-pre-pre-contract agreements with Ozil and Sanchez for the 2024/25 season. I got this from a co-worker of the cousin of the boyfriend of one of the concession workers at the stadium, she overheard it while cleaning the beer taps after this week’s match when the board of directors walked by. The selling points are that by that time Vancouver’s stadium will have a natural grass pitch and the Whitecaps will have won the CONCACAF Champions League eight years running and finished second to Arsenal in the World Club Championship all eight of those… Read more »

I do hope he does sign a new deal with us. By far my favourite player in the squad.

On the other news,Ronaldo,messi and muller are joining blackburn rovers for their promotion to the premier league.

I suspect Van Persie is behind this. I wouldn’t put it past him the arrogant cunt.

No, the answer would be: “you may loan Zelalem, maybe…”

When he is well into his 30s I reckon he could contemplate such a move being a fan and all. But heading into his golden years as a footballer, joining Fenerbache now would be completely bonkers, and ofcourse that is exactly what this story is. Completely Bonkers

This is a complete non-runner..absolutely no chance it’s happening in the next 3-4 years anyway!

Come the end of the season, and we are offered say £45mill – £50 mill for Ozil, would you not be tempted for us to cash in? Just a question. Personally I rate Ozil, but you wouldn’t of thought he was a player signed for £42.5mill. I really hope he kicks on this season and becomes a bit more selfish in shooting opportunities but if not, I think £45 mill could get us a good DM like Wanyama (£18mill maybe) and then the rest to be thrown at top end striker or anywhere else. What do you guys think? Hopefully… Read more »