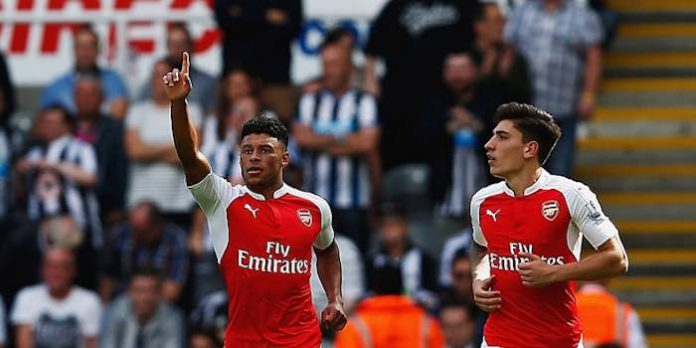 Alex Oxlade-Chamberlain says he may call on Thierry Henry’s expertise to help him improve in front of goal.

The 22-year-old, who netted his fifth goal for England against Lithuania during the week, has scored just 13 times in 128 appearances for the Gunners since moving from Southampton in 2011; a source of frustration for both player and fans alike.

“I might have to have a few words with Thierry,” the Ox told reporters after Monday’s win in Vilnius. “I think there’s no better man to advise you on how to get a goal here or there.

“My goals record is definitely something I think of. It’s something, as an attacking player, you have to be aware of.

“You can’t force it too much because you start to do the wrong things on the pitch if you try to force shots that are not on but it is definitely something I think about and work on.

“I watch games back and see positions, it’s more so for me getting in the right positions to score the ‘easy’ goals as they say. There’s no easy goals but the tap-ins at the back post and stuff like that.

In addition to the strike against Lithuania, the Ox has now scored for England in Scotland, San Marino and most memorably in Brazil. Weirdly though, aside from his Community Shield strike versus Chelsea, he’s not yet scored away from the Emirates for the Gunners…even if his shot resulted in a goal at Newcastle.

You’d expect Thierry, who is helping to coach the club’s under-18s should have a few nuggets of advice for the Ox. As Theo Walcott mentioned last week, he’s a good man to have on hand at the club.

Has every quality to be a great player and is still young.Doesn’t lack confidence, may be a bit on the playground but that will build up with time.If he gets composed ,adds finishing product and defensive awareness to his game,he will be explosive and unstoppable.

You might wanna try to find space to include Walcott’s name into your handle. It was when his name was penned down as our central striker did we see Ozil flourish.

Throw in some suggestions pal.

It Is What It Is
Reply to  AnonymousGun

That has to go on a shirt, no?

Off topic so I apologize. I don’t have/do twitter although it would have been more appropriate … Has anyone seen the suit picture on the Arsenal.com site? Wheres Jack??

Spilled my bloody tea all down my shirt, Le Sod Jim!!!!

He’s still only 22. Plenty of time for him to come good in all areas, including goalscoring. Honestly, his defensive contribution and cutting out getting caught in possession should really be more of a priority. Feels like the goals will come for him anyway.

He could ask Theo too. Maybe not Olivier…

Was the dig at HFB really necessary?

An unnecessary dig at the guy who has carried out attack on his own for 3 seasons, hardly done a bad job has he now?

Just a lil’ joke there… humour transplant much? (I’m a big HFB fan)

Walcott will supply some assists, he can chip the ball really well too. If Walcott and Giroud play together it could be good. Headers for the BFB

For me he has to play higher up the pitch and get in more dangerous positions as he seems to take most of his touches centrally in a deep position. His great strength is his ability to beat a man and that’s much easier on the wing than anywhere else. In my opinion Wenger’s declaration that the Ox will become a central midfielder has actually set him back as he’s now playing almost in-between both position and doing neither successfully, similarly to Ramsey. The advance attacking right position is up for grabs in this team and one or other of… Read more »

I think you’re spot on. Watching him constantly dribble from the centre circle to the corner flag is really frustrating. On the one hand it shows his fantastic ability. But on the other it shows how dangerous he could be if picked the ball up higher uo the pitch and ran towards goal!

I actually think he’s better on the left, where cutting inside is more natural. He seems to gravitate closer to goal on that side. Hopefully he improves on the right too

Can just picture Henry sat in a side office of London Colney with a small waiting area outside filled with Ox, Theo, Welbeck, Giroud etc all taking a ticket and waiting for their allotted slot to be educated.

After you are done with Thierry, perhaps you might want to sit down with Bouldy as well.

I guess it is established that he is not starting games due to lack of defensive focus.

How many points has he costed us in the last few seasons?

This season is the time for him to explode. if he doesn’t, he will start turning into the new Gervinho.

Just goes ahead to show what over hyping youngsters does in the long term in England. Ox has potential but everyone looked/looks at him as the finished article. He’s been a full international for years now when what he actually needed was the u21 to learn his trade. You look at Spain with what they do with the likes of bellerin and what they did with the likes of Silva, Mata, Isco. and even Crack played for us from the 2004/2005 season but was kept in the u21 squad for two seasons only to be called into the squad for… Read more »

Wrong there mate.Cesc debuted for la roja in march 2006 and by euro 08, he already had 15 caps

For the first time I am in love with my auto correct. You type cesc and it types Crack. How I wish that was crackhead

Finally someone seeing that fast tracking players for international football. The likes of Ozil, Neuer and co won under 21 euro cup and then the World Cup together.. Always start small.

Has anyone noticed how down the Ox has been lately?

He looks utterly pissed off! When he scored for England it barely raised a smile…

I get that he’s not in the best form at the moment, but come on Ox no point sulking over it!

Maybe because it was an ultimately meaningless game?

I expected this to be the season that the Ox explodes onto the scene that hasn’t quite materialised although it’s still early days. Hopefully he can find some consistency and nail down a place in the first team.

Give him time. He’s still a young Lad learning his trade. I don’t like people saying they don’t know why he doesn’t play week in week out like Wrighty did the other day though. He has cost us goals and games with his defensive errors and doesn’t score enough. Simple. Consistent 20 mins at the end of each game is enough time to prove to the manager that he’s working on these things. Until then he won’t hold down that right wing position. But love the Ox! Just judge him as a developing kid as opposed to the finished article.

Ramsey Walcott Coquelin did not come good till 23.

Too many people dissing a young player.

No mention of him scoring against the US.

Look at him now. Why limit where someone like say Calum or even Gabriel can go let alone Ox or Campbell?

Bob.s the man for the back post tap in lessons