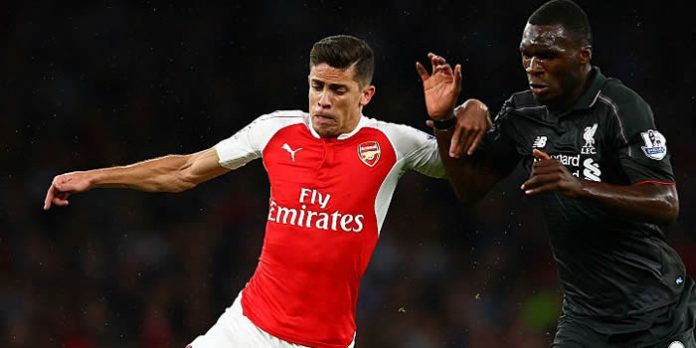 Gabriel says he’s not thinking about Arsenal potentially dropping into the Europa League, claiming his sole focus is on beating Dinamo Zagreb this evening.

The Gunners’ Champions League campaign hangs by a thread after three defeats in their opening four games with qualification now out of their hands.

Arsenal, who’ve qualified from the group stages for 15 successive seasons, know they must beat Dinamo at the Emirates and hope Bayern Munich beat Olympiacos if they’re to avoid UEFA’s secondary competition and months of Thursday and Sunday fixtures*.

“The fact that this game is at home in front of our fans is very important,” Gabriel told Arsenal Player.

“Our fans have always cheered us on and helped us and you feel more motivated playing in a stadium like the Emirates. For me in particular, I feel very motivated.

“We could still qualify from our group in the Champions League, so I’m not thinking about the Europa League. I think that we need to focus on winning these next two decisive games and what happens with the other results determines whether we will qualify or not.”

Stressing that Arsenal have learned from their Matchday One defeat in Zagreb – a 2-1 defeat that saw Olivier Giroud sent off in the first half – the Brazilian defender continued:

“I think we learned a lot [from the game in Zagreb], we showed that we were the better team but that’s football. They knew how to take advantage of our mistakes and got what they wanted out of the game.

“We’ve had time to reflect on what we did well and what we didn’t. We got more things wrong than right, so in the next game we need to try to improve in order to achieve our objective.”

For the most part we here at Arseblog News have made peace with this stinking sock of a European campaign…however, we’re sure the boys will find a way of ensuring it’s dramatic to the last.

The prospect of Europa League football makes us want to do a bit of sick in our mouths…so quite frankly we’d be happy going full-Bergkamp and quitting continental jaunts for the rest of the season.

That being said we’ll be more disappointed than anyone when we go two-nil up in Athens next month only to go out courtesy of some ridiculously contrived stoppage time own goal that deflects off ten players before crawling over the line. Standard.

*If we don’t come bottom.

He could be the perfect stand-in for le Coq .. strength, aggression, bite in the tackle and good reading of play. Gabriel for DM!

As a football fan you’re obviously entitled to your own opinion, but you can’t expect a centre back to play as a holding midfielder. Its a totally different position for a variety of different reasons. The best teams in the world have some of the best holding midfielder’s in the game. Its a role when if played properly, literally means your team will dominate the match. Too often this position is overlooked, especially by Arsenal as we haven’t had a serious player in that role since Vieira. Its not a position that any player can play provided that can defend… Read more »

I never said Vieira was a DM

Fair points – and obviously many players need to be trained for years to switch positions – but it could be worth a go.. I mean how much better have we looked since le Coq has become that guy to battle at the heart of our midfield.. Not only has it prevented teams thinking they can walk all over us but it’s given breathing space for the likes of Santi and Ozil to work their magic. I’m not saying it’s the answer, but it could be a better short term solution over Flam or Rambo trying to relearn a new… Read more »

Have you seen Coquelin move forward? And it depends really. If the player is intelligence enough in the game to make the transition. Wenger should know. Not us. But some have done it. Look at Mascherano who can play tremendously at both positions. Lahm at RB and CDM. Also Gary Medel who plays fully as a midget-CB for his country but CDM for Inter. Wenger also mentioned players like Chambers who he sees can make the transitions.

He has the complete mentality of ‘The Invincibles’ by demanding nothing but the very best expectation in regards to performance along with trophy aims and not fearing the opposition.

He is definitely a leader at the back and I’m sure we’ll see him and Koch do well.

I still get a buzz knowing he stood up to Costa and got the card rescinded and that fool banned.

Let’s not only cheer after we win or score but make our home a fortress by letting teams know the Gooners will always have the cannons on blast!

If we go into the Europa league it’s all Arsene’s fault. Bring back Bruce Rioch I say. He never had a fair crack of the whip. Also bring back terraces. And pubic hair.

better hand back the three league titles, 6 fa cups, the invincible tag and the emirates and see how bruce gets on so.

Wll yes hashtag- who else would be responsible for it. However, why would we replace one past- it pensioner for another?

Holy smeg, we need a sarcasm font so people can understand what’s being said!

There’s no option even for italics. Maybe we could do that thing where you keep the first and last letters the same. I TIHNK WE SLHUOD BRNIG BCAK BRCUE ROICH

He couldn’t speak English when he was signed, so needs to progress there. I see him more of a Koscielney ie strong but quiet but let’s see.

Wilshere should be our next captain, hopefully he can stay injury free unlike our last 2 captains.

It doesn’t really matter who the captain is, we have not had one since Vieira was sold. The all powerful Emperor makes sure there are no leaders at the club to challenge the status quo. By cleverly surrounding himself with Yes men he has prolonged his tenure.

2 wins from the last 2 games is far from impossible. I fully expect bayern to win tonight and us too. That leaves us going into the olympiakos game with a real chance. Lets not overestimate olympiakos. They’re not that good. We’ve just been ridiculously underpar. If we play like we know we can we should do the job so no more talk of europa league. Lets leave that to the sp**s

We will slither through somehow. But this cliffhanger BS could have been avoided by winning or first 2 very winnable fixtures. Now the challenge is exacerbated by a depleted squad and especially the absence of le Coq to bring law and order in the midfield. But we are the Arsenal. We will prevail. Its not delusion. Its blessed hope. We can’t and won’t play on Thursday midnight in Siberia. We are no spuds.

Just to spite us and punish our lack of expectation and hope – maybe Arsenal will go on and win this whole thing in the most excruciating way possible.. e.g. going up 3 goals in each leg and being clawed back to 3-2 by half time and then having a player sent off and having to defend the 1 goal lead for 45 minutes with 10 men. and playing the final against bayern with Ospina, debuchy, chambers, per and gibbs. arteta, flamini and a few lads from the academy – scoring in the first minute and then clinging on only… Read more »

Most of us haven’t experienced terrorist attacks first-hand but Bacary Sagna says he wasn’t mentally fit to play on Saturday and the same probably went for Giroud and Koscielny. Don’t understand why Koscielny had to start against West Brom the other day.

I hope Gabriel starts tonight. And we should rest Giroud too especially considering his tendency to get sent off against Croatian teams.

Matthieu Flamini or Kieran Gibbs to lead our line!

In short term not being in europe all together seems to be a good thing. But I’d rather have us win europa league at least. It will be a big step in building a base for Arsenal to have a significant impact in the not so great European history of the club in the modern era.

Wrong. Per is starting. This Gada character plays for some other team, I think.

May have to give Koscielny a break if his mind still isn’t in the right frame following the attacks. Gabriel can step in. BUT we should not be complacent again and make a string of wholesale changes.Those complaining about a lack of rotation, well Wenger hasn’t been shy rotating in CL. BUT when he has made the rotation necessary the players who have come in were unable to step up. This should not be an argument for lack of quality because clearly even with our second string, we should have enough quality to better the likes of Olympiakos and Zagreb.… Read more »

Not sure how I feel about Europa league. I guess while there’s still a slim chance we might as well try to qualify 2nd in our group, although that obviously depends on Olympiakos tonight. I’m not sure it’s worth being in either competition if we’re not realistically going to win the Champions League and if we’re not going to take Europa League seriously. I’d like to see us concentrate on the league more than anything. It’s been so long since we won it I’d prefer we did that again before we pay Europe too much attention. I’ve always found the… Read more »

If we had not taken the first two games for granted, we wouldn’t have been in this fucking mess in the first place…what is it with us?..it’s beginning to really piss me off.
Come on Arsenal for fuck sake.