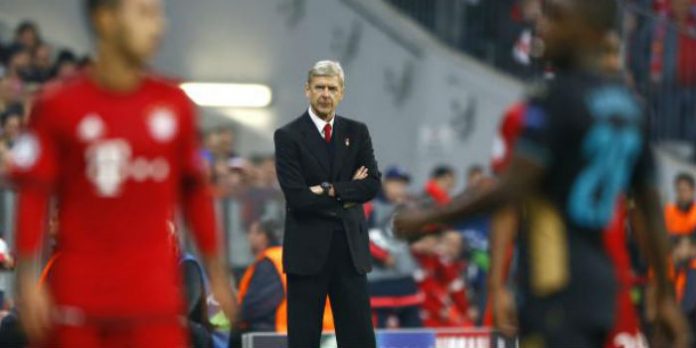 Arsene Wenger says Arsenal ‘weren’t at the races’ as they were hammered 5-1 by Bayern Munich.

Having preached the importance of intelligent defending and player discipline the manager before the match the boss watched on helpless as his injury-hit side endured their worst ever defeat in European competition.

Robert Lewandowski, Thomas Muller, David Alaba and Arjen Robben scored the goals as Pep Guardiola’s side pressed the Gunners so much our defence was turned to juice.

“You have to give credit to Bayern first for their quality and on top of that we made things quite easy for them,” the boss noted after the match.

“My memory of 19 years is not too accurate if I’m supposed to tell you our worst defensive performance. It’s certainly not going to remain in my memory for anything positive.”

Attention now turns to Sunday’s North London derby – a pretty good game to shift attention away from a battering – and Wenger says he’ll be looking for his players to turn the page.

“We have to analyse it and not be too negative. That’s top-level sport. You can understand that you have to be strong enough to face a performance like tonight. It was not good enough and we will have to focus on the next game. We live in a world where you have to face reality.”

I dont even know what to say. In as much as i prayed for at least a draw, i knew that a defeat was almost inevitable but surely, wasn’t expecting a 5 goal thrashing. Well, it has happened already, lets bounce back in the NLD and pray the injury gods leave us and pick on the special cunt of London.
Onwards and Forwards.
COYGs

SB
Reply to  A Xerioz Gunner

Despite the spate of injuries, the results seems to reflect the effort more than the gap in skill!

They only care about being proved right about Wenger.

Disappointing really, I didn’t expect us to win at all but not lose by 4 clear goals. They are a lot more shaky at the back then people think and if we’d shown a bit more concentration and belief when we had chances we definitely could have had 2-3 goals. Just kind of seemed like the players rolled over a bit and didn’t want to put maximum effort into tackling and pressure. . Coquelin and Monreal were good, Ozil silky as always and Giroud did his job with a good goal. I do love Per and he might be a… Read more »

Anyone else here a bit over Arsenal’s Dr Jekyll and Mr Hyde side show?

I think the biggest difference from last night to the 2-0 win was that we allowed Bayern to have the ball in our final third. The two banks of four sat deep on just outside the box without pressing. Two (or three? can’t remember) weeks ago the pressure on the Bayern midfield was tangible and higher up in our half.

Agreed, too little energy to make things hard for them in the first half or make them think that we might attack them. Plus the missing players – Bellerin, Kos, Walcott and Ramsey. Maybe we should reconsider their value, particularly the last two.

The Walcott speed factor does seem to make the opposition sit a bit further back.

If my memory serves me correct Bayern’s first 3 goals were all conceded after a run of play that originated from Joel Campbell losing, or not being able to keep the ball.

Don’t get me wrong I think Campbell was excellent at Swansea. However during the 2014 World Cup in Brazil, Campbell was Costa Rica’s outstanding player in their first 2 matches, only to play like he had legs made of lead in their 3rd match.

Maybe Campbell should have been ‘rested’ for the NLD, with either Flamini or Gibbs slotting in last night instead.

I strongly believe that with all our players available (or even half of them), we’d have showed a totally different face. Losing Bellerin and Kos in 24 hours did us no good. Half of the defense was then changed!
Having one day less to rest than them is nothing positive either.
I strictly and firmly believe that the game at home wasn’t a mistake! We have the tools to face Bayern!

Too Drunk To Be Offise

All said and done, if Arsenal win the next two CL games, and Bayern take care of business against Olympiakos, Arsenal are through. No fuss, so lets all calm down.

1st cover rite side mid, is Ox
2nd is Wellbeck
3rd is Walcott
4th is Rosicky
5th is Campbell
This is cover Im talking about!!!!
THIS IS WHERE WE ARE RIGHT NOW

But we’re not in a race with Bayern are we?

Their philosophy is to win every tournament they enter and make a €1 profit whilst ours is to qualify for the champions league and hoard hundreds of millions of pounds.

They won their league by 10 points and went out and bought Douglas Costa, Vidal and Coman whilst we came third in our league, 14 points off the winners and bought no out field players because no one was good enough to improve our team.

It doesn’t take a great deal of analysis to see where the difference is.

Bayern went out to buy Costa and Vidal since they were losing players in Schweinsteiger and effectively replacing Ribery who almost hasn’t played in a year. They’re also looking to deal with the loss of Kroos and waning skills of Xabi Alonso, I mean just look at that awful corner he produced against us last night! Arsenal are a team gelled together, more then Riyadh Mahrez’s hair! There were barely any spots to fill in our team over the summer. Realistically the only place to improve on was Giroud and I think he’s proving that there was absolutely no one… Read more »

That is some of the biggest load of monkey manure I have heard in a long time. To say no player could have improved this team is insulting. As for the game, I am surprised at the way we set up, especially with the fact we had key players missing. Surely the right thing to do was to play the way we played at home and keep compact at the back. The front players weren’t covering the back line. Alexis seemed like he was not interested in the first half – maybe injured or knackered or both. Ozil wasn’t helping… Read more »

I don’t know why people keep saying this but it is just plain wrong. Bayern is a for profit organization and they make a VERY healthy one at that. They are one the richest clubs on the planet!!! Please stop spreading this misinformation that they are only in it to win. They are also in it for the cash just like all corporations. Without profit, you have no team. End of. As you can see their profit was £13m not £1. “The report, which was later confirmed by the club itself, estimated Bayern’s revenues at about £417million, with the club… Read more »

It’s not wrong to say it’s their philosophy, just because you make £13m doesn’t mean you wouldn’t be happy to make €1 it just means they have more to invest in the team.

Show me where it is their philosophy to make no profit. I don’t think you can prove that point.

Show me where I said no profit?

BTW John I do not disagree with your analysis that we should have bought outfield players or that no one could have improved our team. I think you are spot on in that regard. I just disagreed with your assertion that Bayern would be ok with no profit (or as you put it €1).

I think you’re misunderstanding the point, they are in the business of winning not making money.

Come on guys, the goal should be winning first EPL and UCL, then money will flow itself like loads pile of CASH rain.

It’s the cheap habit of the owner and wenger that holding us back particularly with the current cash pile we have of that near 200 millions in the bank.

Majority fans seems to surrender and give up with tolerable riduculus high ticket prices.

They also have between 20 and 28 piss easy games in their domestic league which results in far less injuries than any team in the PL. Whilst being the domestic champions with such regularity that most German footballers would happily go their with a salary reduction. They have so very few difficult games domestically that a ‘philosophy to win every game’ is only relevant to so few games plus the CL. On top of this the players don’t have the ‘haven’t won the league in x years’ monkey on their back. So I guess it takes a bit more analysis… Read more »

If only Bayern had to face the might of Villa, Newcastle, Sunderland, Norwich, Bournemouth, Watford, West Brom, Crystal Palace, Swansea, Leicester, and Stoke twice a season!!? And let’s gloss over the fact they’ve just beaten us with ease 5-1 and we’re currently second.

1) Don’t be a tart. They may not actually get less money but the fact that they probably would makes it much easier for the club to get the best German players that actually want to stay in Germany. It makes the whole contract negotiation part easier. 2) Look at the bottom 10 in the Bundesliga and please tell us that those teams are better than the PL teams you mention (and if you do then it’ll be clear to everyone that you’re an idiot). You have to start looking at their 4-8 teams before you get up to most… Read more »

1) just say your claim that German players play for less is a lie, and that your assertion that some how contract negotiations are easier is baseless conjecture and your opinion, otherwise it’s you that looks like the idiot. 2) I can’t tell you the bottom 10 teams in the Bundesliga are any better or worse than their premier league counterparts because there’s no way of working that out again it’s just your opinion. What we both saw on the other hand on Wednesday was Arsenal getting hammered by a team that had far greater strength in depth, and there’s… Read more »

To be a bigger team,we need to act like one.Mentality shall be stronger.That’s lacking in those big matches.And I also thought we gave Bayern too much respect.

Perhaps the shirts had something to do with it. Ditch them!

That’s also horsepoo – look at the results so far this season domestically, and our previous encounter against BM. We were scuppered by losing 3 key, critical players, 2 of which give us astonishing counterattacking pace and the other our best defender. Yes Gabriel switched off but you can hardly blame him for being rusty with the lack of games. We couldn’t have played it any other way with the squad on the field – our usual build up and attack game was all we had with the total lack of quick options up front. They were just better on… Read more »

My fear is that we could find ourselves in the Euro cup along with the Spuds. I would rather finish bottom of the group and concentrate on the EPL.We fight all season to finish in the top 4 only to, normally,go out in the first stage of the knockout games, but unless we win our last 2 games it’s back to the Holy Grail – Top 4 objective. Sorry for the negativety. COYG

No need to sorry, jimbo.