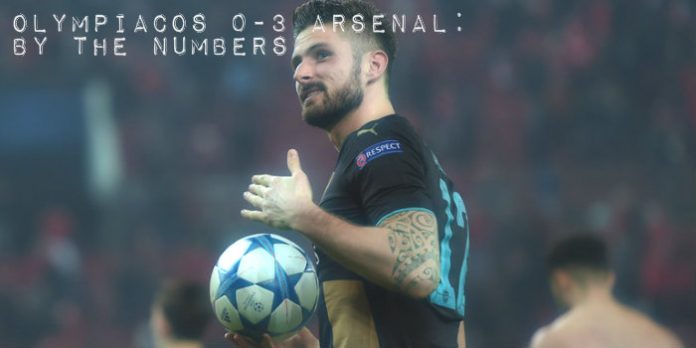 *This article was edited on 10 December 2015 to change the consecutive knockout stages from 16 to 13. The Champions League format has changed over the years and there used to be two group stages (show me the money?). Arsenal were knocked out in the 2nd Group Stages in each of 2001/2002 and 2002/03. So, TECHNICALLY, they didn’t reach the knockout stages though it is often considered a similar feat. I have an odd way of counting things some times and I like to consider all the factors when writing a stat. In my count, Arsenal haven’t been knocked out of the first group stage of the Champions League since 1999. That’s 16 consecutive seasons. Of course, I also think Thierry Henry has scored 229 goals for Arsenal, not the 228 official count. Henry’s shot was on target, Scott Dann only helped it in the net.

Ozil to Ramsey to Ollie on loop in my head. Good morning Gooners!

There’s something deeply satisfying about the Houdini like way we qualified this season. Goes to really show you the value of consistency that Wenger always talks about

I think it was because we were so roundly written off and yet made it look easy. Also, the way United made a hash out of a fairly straightforward group as well

7 – Neighbours I had pissed-off when Giroud scored the 2nd.

Wonderful result! Spare a thought for Manure who have to endure the Europa League for yet another year lol!

3. Mesut Ozil playing 3 superb passes at the right time with the right weight. One to Ramsey for first goal. Two for Campbell for second. Three for theo for third. The man conducts the orchestra and when they play they play.

That’s the spirit, especially after such an awesome win *slow applause*

I don’t even care if you are right. Better to play in CL, even if you fail, than to play Europa League

we have the best and most handsome header in europe, undoubtely!

5265 – F-u’s to the people who scheduled a work meeting that made me miss watching the game. Gonna have to watch this one on replay.

“1 – Number of Arsenes Wenger there are”.

One of the most important chants – for me anyway – that is hardly ever sung (or is audible) anymore at the Emirates.

Its sung at a lot of away games!

Great performance. Wenger however must get a good DM to reinforce the midfield. We absolutely can’t rely on Flamini to challenge for the league and staying in the CL.

Did you watch the game???

Yeah, just like everyone on here was assuring each other that campbell wasnt “arsenal quality” as recently as this fall.

1 – Sickie that paid off
28 – years old I am today
100 – Perfect more enjoyment of the win because I didn’t have to record the game and could experience the win as it happened.

Bring on Real Madrid we can take em!

If we avoid Barcelona, we will go far in this competition. PSG and Real don’t scare me at all. COYG

Yes, it’s handy that of the two biggest guns in the competition, we can only draw one of them. Although Real Madrid won’t be pushovers if they can get healthy.

Only Barca and Real are avoidable

Avoid barcelona and the others are not impossible. specially with alexis back.

What is the assist to an assist called, is there a stat for that? I’m sure Ozil would be leading the top 5 leagues as well, I reckon he created our 1st goal.

Opta appears to call it a “second assist”. Around the time Hleb was at Arsenal, some fans referred to it as a “pre-assist”. In that vein, a “Hlebbist”, perhaps?

@sg_gooner: no, it’s not a key pass. In Opta parlance (which seems nowadays to be the standard), a “key pass” is where the recipient of the pass takes a shot without scoring.

Pre-assist. Rarely if ever listed in publicly available stats.
Key-pass is the pass that led to a shot that did not result in a goal.

God is Bergkamp, Bergkamp is God
Reply to  Pacific Gooner

Hockey style (ie 1st goal: Ramsey-primary assist, Ozil-secondary assist), which is interesting how the culture around hockey awards both equally, too. On a tangent, up for Paddy Kane to go to 24 games straight, go hawks

Giroud would win that without a doubt!

What were our chances to qualify? I think after the first 3 matches, they were pretty low even with the win against Bayern.

To the best of my knowledge, we have just become only the second team in CL history to qualify from their group after having only 3 points from 4 matches.

I know not everyone will agree, but i much prefer this classic style by-the-numbers.

Glad to have the old system back.. Now I can cram all the stats and blurt them out at the office anytime I get challenged by a rival hehe