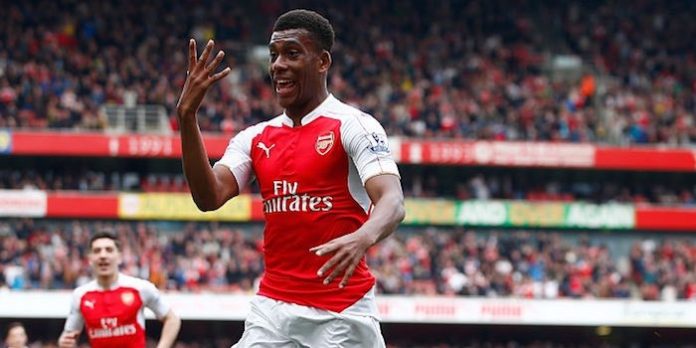 Nigeria’s recent draw with Egypt means Alex Iwobi won’t be going to the African Cup of Nations in January, however, the 19-year-old could feature for the Super Eagles at this summer’s Olympics in Rio.

Having committed his international future to the country of his birth, the midfielder is now eligible to play for Samson Siasia’s under-23 squad when they head to South America in August for the 16-team tournament.

Iwobi is eager to be included, as he told Goal.com after Saturday’s 4-0 win over Watford.

“It was a massive disappointment for the team that we did not qualify for the forthcoming Africa Cup Nations.

“I am looking forward to the forthcoming Olympics and if I am invited, I will do my best to make a meaningful contribution.

“I believe that Nigeria has a crop of excellent players who are capable of doing great things at the Olympics. Coach Samson Siasia deserves a lot of praise for securing a place for the nation at the Olympics.

“I do not have any regrets whatsoever in opting to play for Nigeria and will always do my best whenever I put on the green white green colours of Nigeria. I hope to be involved in the forthcoming World Cup qualifiers too.

“I am very grateful to my teammates, the Nigeria Football Federation, coaches, the press and fans for the warm welcome I received following my decision to come home.

“Nigeria is a great footballing nation and deserves to assume her rightful place in Africa and world football and I am keen to be part of a team that achieves this goal.”

Nigeria boast a proud Olympics football record, winning gold at the Atlanta Games in 1996 and finishing as runners-up in Beijing in 2008.

The Rio Olympics run from 3-20 August meaning Iwobi would miss out on Arsenal’s pre-season preparations, including the fixtures in California, as well as the start of the 2016/17 campaign.

Well…he is a man with mission.

Stupid stupid FA. Probably going to be the best Brit of a generation and he’ll play for the super eagles. Sad. Not shocked.

Stillmatic
Reply to  Andrew with an A

Probably gonna be the best brit of a generation?

I sure hope so, but that right there is such unnecessary hyperbole.

sauce
Reply to  Andrew with an A

I don’t get this angry reaction from the English fans.. he Is fully Nigerian and he wishes to play for his country.. enough of stealing our players you already took alli and a host of others.. can we just have the rare pleasure having our own play for the team we love??

The sky is the limit for this kid! Go Alex!

I hope he makes it there.

The humility and the calmness with which he speaks is so welcoming. Alex, please take Nigeria back to the top ten in the FIFA ranking and the Arsenal back to the double/treble era.

Yep, he’s gat the Nigerian DNA alright, wish him the best of luck in his career for club and country

As much as I respect his decision, I think playing for Nigeria was a very stupid career move. Whilst the Oylmpics might possibly only be a one off thing the African Cup of Nations is what every 2 years and played in January and early February, add the fact we’ve just signed 2 other young Nigerians there’s no way we can rely on 3 players who are going to regularly miss large chunks of the season with internationals, so at best the best one will be kept on. I think he’s been poorly advised and it’s a decision of the… Read more »

look at it this way: he’ll always be a Nigerian, but may not always be an Arsenal player.
Asides that he ‘may’ not be preferred by the English F.A where there is stiff competition with other native Brits of equal talent. Remember John Fashanu. (Google) also Gabriel Agbolahon.

Wilfully removing yourself from selection for your club and employers for 6 weeks every 2 years at a crucial time of the season wasn’t a particularly clever move in my opinion.

Fair enough but who wouldn’t wanna play for their country.

He played for England at age group level, he should have carried on into the seniors. As Dan wrote below, he might not get back into the team if he goes to the Oylmpics as he’ll miss both pre season and the start of next season, it doesn’t put him in a strong position. To be honest you’d think if CAF really cared about the careers of African players they’d play the African Cup of nations in the european summer or at the very least hold it once every 4 years because as it stands not one of the very… Read more »

Yes, but he’s only 19 so he had time on his side, he didn’t have to make the choice yet. When you consider that we now have Elneny, who is also going to go missing for the ANC every couple of years, how many African players do you think we can build the team around? i don’t think it’s an accident that Wenger hasn’t bought any over the last 3-4 years or that Real, Barcelona, or Bayern don’t have any, the ACN must really hinder the prospects of African players. I’m sure Wenger privately must be pretty disappointed with his… Read more »

This issue has been raised on many occasions and response is the same. African Nation cup was moved once to accommodate Europe competition. In 92 nations cup was moved from march to January to accommodate European break. Thing is Europe is not ready to change or cut down on games. CAF can’t move AFCON to summer because that is the height of raining season in majority of Africa (when it rains it pures with thunderstorms and lightning strikes) AFCON can’t move to 4 years because it will kill the growth and development of African football especially for smaller teams whose… Read more »

It only weakens African football not strengthens it. If CAF want African players to have big careers in Europe and enhance the development of it’s players it’s them that will have to change their calendar not vice versa. If i owned Arsenal i wouldn’t want any African players, and looking at the squads of the biggest teams in Europe i think thats the view they hold too. No serious club would hire a player who could miss 20% of the season every other year, and as a result i don’t think any of the top clubs will be paying the… Read more »

Just give him the number 25 already.

Wish him all the best but he might come back and find his position in the team taken. It’s good that no one is a guaranteed starter like previous years

Nigeria didn’t actually lose to Egypt. It was a 1-1 draw. But still out of the tournament nonetheless.

Nigeria did actually lose to Egypt 1-0. Just to clarify, they played each other twice and the first ended 1-1 (that also felt like a loss)!!

Very glad that he’s gone with Nigeria over England. That British media spotlight that made Chamberlain believe he made it at 19 is not what I want to happen to our star Alex. Best of luck to you sir

I don’t know why somebody thinks that it is a stupid decision to play for the country of ones birth. Must everybody play for England? We have so many players that are not English but made it through playing football. Why should Iwobi’s case be different?

Good decision Alex and all the best at the Olympics

Good decision Alex. Wish you all the best at the Olympics

That epic performance against Barcelona was the mark of genius. Much more to come. Yah Gunners yah!

well it will be refreshing to see an actually under 23 player in an u23 squad.