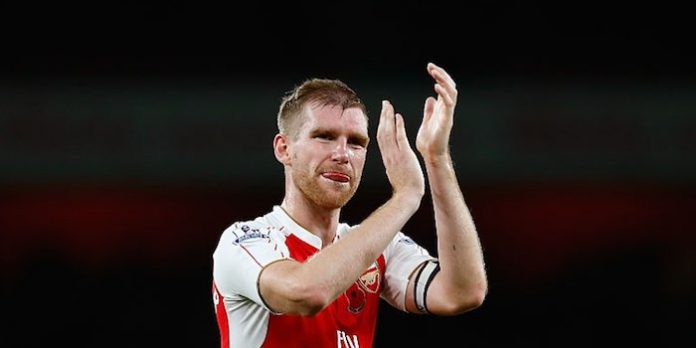 After Alexis Sanchez and Aaron Ramsey changed numbers for next season, and Granit Xhaka handed the number 16 for his debut campaign with the club, Per Mertesacker has become the latest Arsenal player to switch numerals.

However, the German has bucked the trend for a slightly lower digit, and instead will sport a clip-art bee on his back.

“Bees are our friends,” said the BFG. “I wanted to highlight the issue of the bee population dying out.

“It’s suggested that Colony Collapse Disorder that has wiped out an estimated 10 million beehives in North America alone, and the western honey bee is in real danger.

Mertesacker’s status as one of the senior players at the club was the only reason the move was sanctioned, with Arsene Wenger immediately dismissing Hector Bellerin’s request to change from 24 to a bolt of lightning emoji.

What next? Ozil change from 11 to Flamini’s caricature on his back?

Come on man. It’s not even April 1st.

Ozil's a Gunner
Reply to  Stuart_Ten

I just don’t think you understand

why the downvotes?I was continuing the chant
Or have you guys forgotten the ozil chant?

Aedan
Reply to  Ozil's a Gunner

Ozil's a Gunner
Reply to  Aedan

I’m sorry if I sent the wrong signals
But how was I not continuing the chant?

Thing is: Özil is not the ´Big Fucking German`… he´s the other one (with another song ..)

InTheNorthBank
Reply to  Ozil's a Gunner

Sources close to Mertesacker said the Bee was initially selected over the Arsenal defender’s confusion of the first letter of his nickname, BFG. The big German was quick to dismiss that with a rather embarrased wave of his tree branch arms.

Mert creating a bit of buzz today with this announcement.

But seriously, if you have a garden then grow some veggies and plants instead of a pointless lawn. Bumble bees really love my garlic chives!

Yes, our garden is full of bees. Much to annoyance of the dog who chases them around trying to eat them. He has not yet succeeded, the eejit.

Rumour has it Podolski is changing his number to the Laughing With Tears Emoji, what with all the bantz he has.

No but I will now.

I did not see this, but like Cliff, I will now!

Please take my money, I want this so bad.

Bees are awesome, they give us honey. Unlike wasps, who are just assholes in general. Mourinho is a wasp, he should get a shirt with it and ‘Asshole’ written under it.

Exiledgooner
Reply to  Ox in the Box

Don’t knock wasps! Wasps eat huge amounts of pests which can damage plants, and provide a source of food for numerous other animals higher up the food chain. I see Mourinho more as lungworm or an aggressive tumour.

Mourinho’s a grub; he lies on his belly all day like a snake and eat’s the roots of your lawn. Only the noble skunk eats grubs, but even then the skunk ruins your lawn. A lose-lose situation, like his appointment at Man U will be!

Mourinho is shit wrapped in skin!

So if you cut him open it says “Tottenham” down the middle?

Seeing as the 34 thing isn’t happening with Xhaka, anyone else thinking that the plan is to give him the 4 when Per’s finished with it?

After saying that squad number changes are the most read articles on this site, you post fake news with a headline about a player changing his shirt number? A cynic might think you posted this just to boost page views on a slow news day.

Interesting argument you have constructed.

On the other hand it the reason for this could be BANTZ!

You might call it cynical. I just had an idea about Mertesacker with a bee on his back and thought it was funny so wrote about it.

Blogs the years or unmatched professional news reporting gives you the right to write some fun stuff from time to time and not explain why you did to whoever.

What’s up Piers Morgan’s tweet relating Ozil being linked with other teams?
I know he is a prick but still..
Is Barca trying to fuck us right in the back after realising chasing Hector is going to go in vain?
That tweet’s got me worried ever since I read it!

The solution is to never read or listen to anything from Piss Moanan.
The type that when it goes well he’s got nothing to offer.

Personally I think Ozil is happy in London and Arsenal and will stay. He is using the Euros to pressure Arsenal into buying more Top quality players especially upfront which has been not up to his standards.

A stylized gigantic fully erect phallus for Olivier Giroud instead of the number 12.
That will land more often on the score-sheet. It will also intimidate the opposition.

🙂 apparently you three have seen the King’s armour!

With all these changes, it’s bee-n a hive of activity at The Emirates

This is just getting silly now. Bring back the bog standard 1-11 I say.

Actually, Iwobi’s the latest to change his number: 45 to 17

I enjoyed watching Rosicky today playing for Czech Republic against Malta, he completed 65 minutes unscathed
off the topic may be but I thought you might be interested.

Walcott should get an emoji poo on his back !!

1-11 doesn’t exist in modern football. we have two guys figting for most positions. way too much rotation positionally. Cazorla has gone from AM to DM Ramsey has played RM as well as DM even AM when Ozil was injured. That’s as well as the insane amount of rotation. 1-11 died in the 90’s

If only this was true!

hehehhee. bees are funny. this post is funny. i am now happy.

Ten pooos for u blogs!