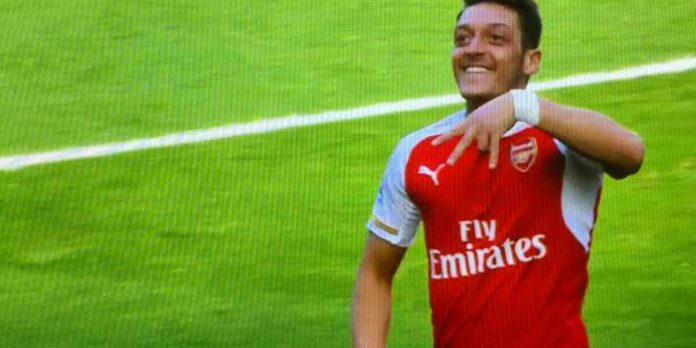 Mesut Ozil has once again shown himself to be a man who doesn’t pay too much attention to criticism, at club and international level.

The German was voted Arsenal’s player of the season for 2015/16, and speaking in a lengthy interview with L’Equipe (translated by Get French Football News here) said that doubts about his ability to adjust to English football made him redouble his efforts.

“I never doubted my ability to succeed in the Premier League,” he said. “The critics and the difficult moments pushed me to work harder. I think that I have shown the world. I have learnt to accept that sometimes you have low points.

“When I play less well, I remain calm, whilst working two times harder in training. Through perseverance, I became better.”

It tallied with criticism he received during Germany’s World Cup win of 2014, again something which didn’t cause him sleepless nights.

” I have nothing to prove to anyone. At the World Cup, I put myself at the service of the team. I played in a position that was not my own. As a playmaker I am more at ease in the centre behind the attackers.”

And on being played out of position, he simply accepted his job in the team.

“It is not in my character to do that. It was the World Cup, not the Mesut Özil Cup. I accepted the decision and did not regret it for one second.”

Having previously touched on dietary adjustments, he again laud out what he’d changed.

“I changed my body language,” he said. “Before, after each missed opportunity or imprecise pass, I let my shoulders drop and I would moan.

“Now, I keep my head up and I try to make up for my error as soon as possible. After training, I go to the gym. I also go into the freezing baths in order to have a better blood circulation.

“Before I drank fizzy drinks and I was not drinking enough water. Now, I drink enormous amounts of water and green tea. In terms of nutrition, I have stopped eating bread.

“As a result, I feel much better in terms of my body and muscle injuries are much rarer. I will continue to be disciplined and rigorous. There is no secret.”

And in general, he sounds happy with his life at Arsenal and in England, despite saying the Gunners lost concentration too often last season.

“On the pitch, I am always enjoying myself,” he said. “I am lucky to play in the best league in the world and to be a certain starter at one of the best English clubs. In the Premier League, my enjoyment is very high.”

We are so lucky to have had both Özil and Bergkamp within the space of relatively few years. Looking forward to the headline that says he has signed a contract extension.

Yeah me too. But if it were him or Dennis at the same age, I’d give Mesut a lift to the airport. He great but no finished product or legend yet.

“and to be a certain starter…” Normally I’d be saying at this point we should be getting someone in for competition for this lad.

But this is Mesut Ozil.

spinner
Reply to  The Only Olivier is Giroud

Top statement. Wish I could give it more than one thumb up.

I drink lots of water and green tea, and don’t really eat bread. I don’t like fizzy drinks other than beer which I admittedly enjoy a lot. So the only thing preventing me from becoming Mesut Ozil is beer?! A cruel quandary this.

“Before, after each missed opportunity or imprecise pass, I let my shoulders drop and I would moan.
Now, I keep my head up and I try to make up for my error as soon as possible.”

That’s alright Mesut. But I still fancy Raheem Sterling. You see he runs around a bit more. And my mate Moyes still isn’t convinced by you.

“It’s in the arms. Those flailing arms make all the difference. Doesn’t matter if it makes you run like a girl as long as you run around a lot.”

I think Ozil knows a world class striker is coming at Arsenal that’s why he’s happy,wishing…….

May your happiness continue at the ARSENAL

Every now and then I stop to think to myself, fuck, Mesut Ozil plays for The Arsenal. Just now was one of those times. Sometimes I still can’t quite believe it!

He likes to play in the center … he’s willing to play in a position not his own.

This makes me so happy! What an absolute top dude he is.

He once said he imagines how people are around him and how he expects them to change movement immediately he receives a pass.

Still wish he’d jump for a header or shoot.