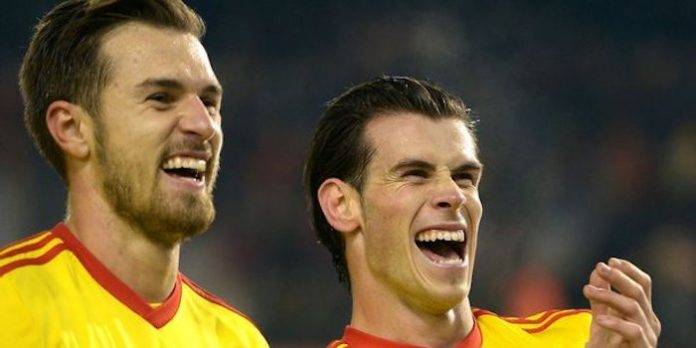 Aaron Ramsey says that the Wales squad are in great shape for the upcoming European Championships, and that the togetherness is being fostered by some ribald messaging via WhatsApp.

This is the first time Wales have qualified for a major international tournament since 1958, and with quality like Ramsey, Gareth Bale, Ashley Williams and Christ Gunter in the squad, they have high hopes for France this summer.

Preparations have already begun, and the Arsenal midfielder says the fact that they’re super best friends is playing a part.

“We’re a good group of lads, we all understand our roles and responsibilities on the pitch but also we enjoy each others company; we’re quite a closely knit group,” he said.

“We’re on a WhatsApp group, the banter is flying on it.”

Asked to expand on that, he continued, “Just the other day there was a message from Joe Allen taking the mickey out of one of the other guys about his haircut.

“As quick as you like I went on WhatsApp and said ‘It’s a bit much for you to criticise somebody’s haircut when you have a beard which is like having a haircut on your face.

“And before he could reply I then said ‘And I know I also have a beard so I think that’s check-mate, Joe!’. I showed it to Williamsy and we both laughed out loud and also put in the crying with laughter emoji in another message.

“Not long after that, we saw Gareth Bale in the shower and because he’s living in Spain he’s got a tan because the climate in Spain is much more favourable than it is in England or indeed Wales. They have many more days of sunshine than we do, that’s the natural order of things and I suppose that’s why so many people from the United Kingdom go on holidays there.

“So when he was in the shower we saw that he had tan-lines and I thought of something really funny and I said it to Joe Ledley and he burst out laughing and said ‘You have to say that’ and I said ‘Maybe it’s a bit mean’ but he said ‘No it’s not’ so I did it and sent a WhatsApp which said ‘Gareth, you have a big white arse’, and now everybody calls him ‘WhiteArse’, which is hilarious.”

But as well as being the dispenser of banter, Ramsey is happy to be the recipient too.

“It wouldn’t be fair if I was the only one zinging them with hot burns,” he said, “so I have to take my fair share.

“After I said to Hal Robson-Kanu ‘How’s your Dad, Nwanko?’ because it’s the same name as Kanu who played for Arsenal so there’s an ever so nice Arsenal connection there for me, he replied ‘I’m gonna stick your face on a George Foreman grill you dull c*nt’.

“I almost wet myself with the laughter but I didn’t really it’s just a saying to get across that I found it really, really funny.

“I mean, George Foreman doesn’t do grills, he plays that tiny guitar thing.”

Not sure I believe all of that. The main topic of Welsh conversation is the sheep sh*gging in my experience and they haven’t mentioned that once.

Quite a few Welsh people on here by the look of it.

Don’t forget the politically correct folks out there.

its funny the first 10 times at most, after that I just think people have poor chat if that’s their go to joke re: Wales.

Danny
Reply to  Gandalf the Gooner

Yeah that’s so true, the sheep shagging thing is old hat. The Welsh people I know are more likely to shag their sister!

Either that or people just don’t fully appreciate your comedic genius.

Blogs this is some funny shit! Haha… Just imagine poor Aaron reading this, he’d be horrified. You’ve absolutely murdered him! I do reckon I have more personality in one of my pubic hairs than Aaron does in his whole body though.

I lived in Wales for a few years and I never once saw anybody try to shag a sheep. With or without a four foot length of rope and yellow wellies (apparently this is the best way, but I learned that in Australia). I did, however, see one guy shag an armchair whilst loudly declaring his eternal love to her (it), with his jocks round his ankles, in a student disco, on the dance floor, in front of close on a hundred until-then mostly innocent people, in Wales. Yes he was Welsh. It must have been true love because he… Read more »

Fun fact of the day.

The reputation the welsh have for sheep stems from an old medieval law.
I might be a bit fuzzy on the details, but loosely speaking the penalty for stealing someone else’s livestock was harsher than the penalty for fornicating with said livestock.

Faced with the prospect of losing limbs for stealing sheep (It was a simpler time) many would be cattle thieves preferred to admit to doing the naughty with the cattle instead.

Thus giving rise to the notion that the welsh love them some sheep.

The more you know and all that.

Not that a sheep was their only chance?

No way! That’s great, living on the border of Wales I’ll get that into conversation soon…

Surely if they had been sagging cattle they would be known as cow shaggers?

according to david cameron the english like getting blown by pigs.

I don’t want to know.

Have you ever had a dream, Neo, that you were so sure was real? What if you were unable to wake from that dream? How would you know the difference between the dream world and the real world? This is your last chance. After this, there is no turning back. You take the blue pill – the story ends, you wake up in your bed and believe whatever you want to believe. You take the red pill – you stay in Wonderland and I show you how deep the rabbit-hole goes.

Morpheus… are you trying to seduce me? There’s definite homo-erotic undertones in your pitch… Just to clarify: you want to drug me, and take me into a deep hole you refer to as ‘Wonderland’?

Screw it, if you can get that cute mysterious emo chick from the 7-11, Trinny I think, in on this drug-fuelled swingers party then I’m in. Just don’t let things get too ‘weird’. Last thing I want is to spend 6hours with a loose grip on reality doing random shit only to get to the end and wonder what on earth just happened.

Sheez – what these interlulls can do a an other-wise semi-intelligent bogshite… er, I mean blogsite.

No way! You can keep your pills.
I might wake up as Mourinho, or even worse… John Terry’s missus!!

Urghhhh… That is fucking disgusting.
Can’t believe I have to feel that.

This year it was rather surreal.

And looks like some Sp*rs fans on here too…

I think some of this might not be true. I’m sure nobody would call Rambo a “dull c*nt”.

Let the creative summer articles begin! only ~10 weeks til the new season gents

Hahahaha blogs I know Rambo isn’t the most captivating guy in interviews but no one on Earth is THIS dry!

One of your best yet, Mr Blogs.

Agreed. He wrote that ever so well.

Talk about an unreliable narrator experience. 😀 😀 😀

But probably better than an unnarratable Reliant experience?

I swear Blogs enjoys mocking Ramsey a bit too much. It’s ok though because he does it “ever so well”!

Whoooosh!! That’s the sound of it going right on past you

if any one has to read between the lines he will understand that Bale is coming to Arsenal….

Ramsey v Milner….now that would be conversation worth sleeping through.

Michael Owen could commentate on it. That would be peak boring.

Ramsey, eh? getting into the details ever so well….:)

You don’t have to be crazy to play here, but it helps.

Typical top bantz from The Arlo.

Cmon blogs we don’t want this escalating into a boring James Milner situation, save it for when he leaves us for Madrid

If you want to emulate Beckham, Aaron, feel free to stop at the hair and the modelling. The painful interviews are a step too far.

Read the whole article from the 4th paragraph down with a welsh accent inner monologue.

Is that near Inner Mongologuia?

Someone lock this guy up in Bantanemo Bay.

I really, really hope he makes too much money as a footballer so that he is never tempted to give punditry or commentating a go

no such thing as too much money, mate.
Henry made a ton and look where he is now.

Yeah, sitting next to Mr Fucking Charisma every week on my telly. I’d sooner shave my fucking lips off.

Brilliant…I am on the train crying with laughter. ‘I’m gonna stick your face on a George Foreman grill you dull cunt’ will live long in the memory.

Could they do a Leicester?

No, Wales aren’t allowed to compete in the Premier League. 🙂

Between this article and the Jack Wilshere wants to play in central midfield I think it’s fair to say the arseblog newshound isn’t taking the offseason too well. Are you OK bro

He only wrote the Wilshere one 😉

The bond is so strong that when Gareth got a call from Ramsey he jumped out of his bed because he thought it was Ramsey Colleen.

With “Christ” Gunter in the squad, this really is the second coming of Wales to a major championship.

Blogs, you’ve outdone yourself again! This is epic

Ramsey should be playing in the slot as an option to Ozil IMO. He is an incredibly creative player. As the link player, he needs more positional discipline. We have seen with Elneny against City that even the favorite at the moment was caught up field on 3 ocassions leading to dangerous breakaways against us. Had this been Flamini or Ramsey, there would have been much constenation. Ramsey fared well with Flamini holding in a period when we were shorn of some of our better assets up top, less so with Coquelin. With Jack back in the squad (and Elneny)… Read more »

What??? Some serious football talk??? Santa – ya dull c**t! Now go to the kitchen and press your face to Foreman grill (or his ukulele if you can’t find the grill!)

WhiteArse. Haha. That’s what I’m calling Bale from now on.