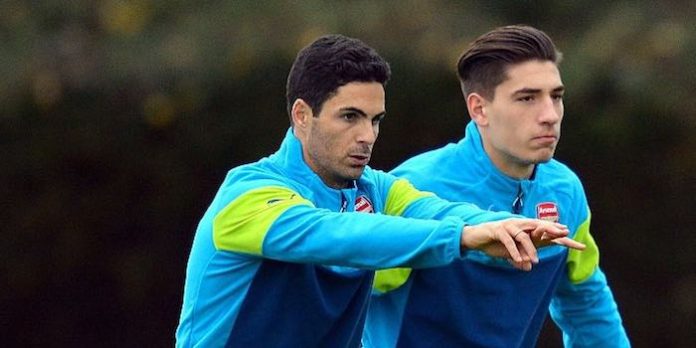 Hector Bellerin has paid tribute to Mikel Arteta and his wife for helping him settle in England when he first arrived from the Spain.

The 20 year old has enjoyed a meteoric rise in the last two seasons, and will now be part of Spain’s Euro 2016 squad after a hugely consistent Premier League campaign for the Gunners.

Speaking to El Pais, he spoke about how the Arsenal captain helped him in his early days at the club (worth noting that Arteta predicted Bellerin’s rise some time ago), which has played a major part in his development as a player.

“Mikel and his wife adopted me when I arrived,” he said. “I was just a kid and he was like a father to me.

“He was fundamental to my integration at Arsenal. I’m very close to him, Cazorla and Monreal.”

He also spoke about former Gunner Bacary Sagna as somebody who taught him the position he plays in today.

“When I was at Barcelona, I always paid attention to Dani Alves. And Sagna was like a professor, because we were very close at Arsenal and he was very experienced player. I always took note of him.”

Asked if he felt more a product of Arsenal or Barcelona, he replied diplomatically.

“I’m a mix! I had eight years at Barcelona, and I’ve been six at Arsenal. I’ve learned so much with the Gunners, but the base I acquired at Barcelona was invaluable. How to train, the philosophy … the defensive side is very English.”

It’s quite a mix, a good one too, and it’s notable how the press interest in Bellerin has really ramped up over the last few weeks. Shows what playing well and consistently does, I guess.

DNA have been distorted! make it true Gunner DNA soon!

I’ve got a picture of Mikel and his wife standing over a baby Hector who’s been left on their door step Harry Potter style, with her saying “Oh he’s so cute let’s keep him” and Mikel going “definitely, there’s real potential in that hair”!

This is definitely the arse of the week! :’D

Comment:@arseblog please Photoshop this. I wish I had the skills to create this image ?

How can there be 4 Arsenal supporters on the planet who dislike this comment?? Must be hair jealousy, idk.

The high esteem Arteta is held in by fellow professionals, his maturity and intelligence.. All predict that he will turn out to be a fine manager

I’ll get my coat

You really don’t know how this works

I live in Barcelona and the press here is intense about Hector. People seem to assume he’ll come back at the drop of a hat and they have to audacity to say that Arsenal are asking too much money for what is basically a Barca player.

As much as I wish it wasn’t true, I think we’ll be lucky to keep him another two seasons.

I hate Barca, what a stinking, thieving club.

Although I’ve no doubt he’s likely to return at some point, I don’t get the same sense that I did off of Cesc that it’s inevitable or imminent. He seems perfectly happy here, and if- as we need to- we start challenging properly and winning titles I think we’ll have him a little longer than a couple of years. Perhaps that’s just me being naïve, though…

It’s nice to know Hector is the true heir to all the love I hold for Arteta.

I don’t like how this is playing out. The questions they are putting across him are a throwback to the Cesc era.

How can a club exert so much power over media and TV channels? I can’t see Arsenal doing that with Sky or even BT

This is not funny anymore, can somebody just shot the door on this cunts face(barca and their fans)

It’s sad but he was very unlucky. He would have walked in to any other national side particularly following his first season at Arsenal. I suppose he can take some solace from the fact that Spain produced some of the most talented midfielders who were playing for the best clubs in the world at the time of Arteta’s peak – Xavi, Iniesta, Alonso, Busquets (painful), Javi Martinez (young prospect at the time) as well as the more attacking options of Fabregas, Silva, Cazorla, Mata (has peaked now), Navas (definitely shit now). Considering how inconsiderate and out of touch some professional… Read more »

Navas AKA The Spanish Aaron Lennon.

Even before he joined us, he was unlucky with injuries when it came to playing for Spain. It seemed like he was always out for a week or so just before any of their international games.

We´ve had some excellent players at RB. We have a star now. May this luck continue.

I thought all our players were shit and awful?

Once you become a cockney you’re not likely to ever leave Londres! So I’m not worried!

Nice to see he’s been of some use during the last couple of years besides keeping the treatment table nice and warm.

Now he jumps ship at the first opportunity to help one of our competitors.

Is he leaving us by his own wishes? or maybe we aren’t in a position to offer him a role with us.

Makes you realise the sort of guy Arteta is
ok you’d expect this for a kid arriving this season or last, when he was captain. But Bellerin arrived the same year Arteta did. Guy came into the club and took on a leadership role straight away

anybody else think that Mikel, Mrs. Mikel, and the santi-nacho-hector trio would make a hilarious sit-com???

I loved this so much that I laughed myself silly and accidentally thumbed it down instead of thumbing it up. I had to confess- my bad!

time to bring sagna back soon so he can help our youngsters in how to be a proper defensive wingback.

Haha no chance. He’ll be too busy with Arteta helping the Man City youngsters.

He’s got at least another year earning shed loads of cash and he’ll be warming the bench again if Zabaleta is fully recovered from his knee injury.

Was watching Xmen the other day..was it just me or who or who else thought Tye Sheridan(The Cyclops guy) looked so much like Bellerin?

It would be nice if Hector, Santi and Nacho would help to persuade Mikel to stay. I know he has an offer to work with Pep Guardiola at Shitty, but from his comments after his last game that was before Arsenal also made him an offer. I’d love to see him stay as a coach. Guardiola really gives me the creeps, the way he anounced to the world that he was moving was disrespectful to Bayern and Pellegrini, Pep cares only about Pep, the thought of our Mikel working with him at Shitty makes me feel sick.

Do we have any suitable vacancies so we can offer him a position as a coach?

This is no excuse. If we don’t have a vacancy then we should create a position for him.

Can we give him a 10 year contract yet