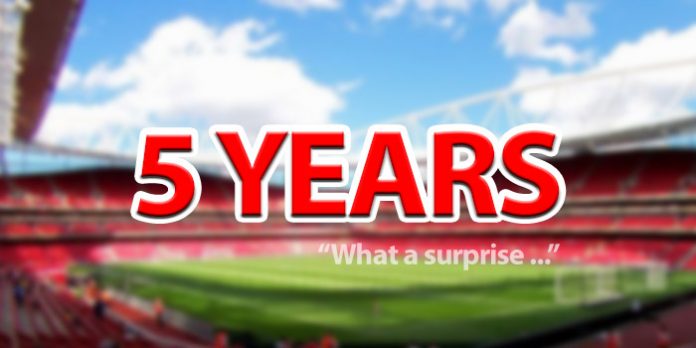 It’s a jelly and ice cream* day for the team at Arseblog News as we celebrate our 5th birthday. It all kicked off on June 1st 2011, with a post about the Arsenal Ladies (start as you mean to go on we say), and here we are 10 (or more?) transfer windows later, still doing stuff and things.

Here’s our annual ‘State of the Arse’ address, enjoy the stats and other bits.

428,300 – approved comments
77,301 – spam comments blocked
Infinity – comments not approved for use of text speak
77,335 – followers of the @arseblognews twitter account
6,588 – posts published so far
3,322 – posts by @arseblog (51% of total)
2,562 – posts by @AAllenSport (aka Arseblog News Hound)
1065 – games Arsene Wenger has been in charge of at Arsenal
271 – posts by @jeorgebird
267 – posts by @7amkickoff
39 – games to go until the current Arsenal squad match the ‘Invincibles’
31 – posts by @Stillberto
29 – posts by Sul
21 – consecutive seasons we’ve finished above Sp*rs.
19 – number of Premier League assists made by Mesut Ozil in 2015/16
16 – Aaron Ramsey’s old number
8 – hours a day Alex Iwobi spends broadcasting himself on Periscope.
5 – lovely, lovely goals scored by Newcastle on St. Totteringham’s Day.
2 – number of times a day people still ask about our p1r.es link shortener on Twitter
1 – April Fools joke that despite being posted on April 1st still fooled some folks
1 – the number of times we came close to publishing an article all about Arsenal signing a shoe.

Here are a few other posts that never quite made it…

The book that summed up the season

The Arsene Wenger interview in L’Equipe that even the staunchest critics of the manager enjoyed.

When we discovered that Mathieu Flamini is going to save the world.

When loads of websites with the words ‘footy’, ‘banter’ or ‘bible’ (or all three) stole the Michael Owen quotes we made up. And then Michael Owen Tweeted about how fed up he was about people making up quotes, before making all those daft fake quotes redundant by actually saying something more stupid than all of them put together.

When you’re not sure whether or not to approve a comment:

And when you’re glad you did after you sign Mohamed Elneny:

When after the final day of the season you can work in a Game of Thrones meme:

When Hector is relaxing at home:

The long awaited debut album from Carl Jenkinson who, of course, has been inspired by his dad’s efforts as a backing singer for Bonnie Tyler.

Except for that one guy. Oh, and that other guy. And the other fella. And that bloke that … well, it wouldn’t be the same without most of you.

There’s a glass of Asti Spumante on us.

We forgot our birthday! Arseblog News has turned 7

5 years of superb entertainment and hilarity. Keep it up lads, without you, I’m nothing

Great work, much appreciated by all of us. We would all buy you a pint, if we ever see you.

Facts, funny-ness and frequently. Nothing else comes close for Gooner news.

And also we are grateful that you don’t publish the clickbait sh*te that a lot of other Arsenal sites do eg ‘New Arsenal signing poses with reported Gunners target’, ‘Chelsea and Arsenal stunned as Tottenham enter race for international forward’ etc etc etc

I’m sure you get more clicks over time because of it!

Thanks for making our day every single day for the last 5 years. Cheers Arseblog! Long may it continue.

Started from the bottom now we here: Poo-Meter.

Avid reader of Areseblog News from Day 1… June 1st 2011. I remember thinking how great an addition it would be to arseblog’s daily, sometimes twice-a-day posts.

Great to see that it has been even better than I thought with a lot more humour and fun had here as well. Congratulations and here’s to many many more… UP THE ARSE……BLOG!!!

My relationship with this site has been nothing but joyful over the years. Can´t think of not checking in everyday. Would be devastating to say the least. Congrats Arsebloggers you are genious.

Thanks for the entertainment over the last few years.

Part of my staple diet.

Well done to all.

Congratulations and thanks for five years of keeping the huge fanbase up to date with the latest in Arsenal happenings.
Pity the club haven’t announced a signing out of nowhere to put the icing on the cake….

Reliable news, reliably entertaining and consistently updated. You are the arsenal news site the people deserve…and also the one we need!

i still dont get why you moderate comments if it has “Dein” in it :)) come on with his help we became Invincibles. after all do you really believe Kroenke is better in any aspect? from now on your moderator shall be sensetive to “Stan”, Mr. blog. 😀

We don’t moderate comments that have ‘Dein’ in them 😉

You dooo! :)) I have screenshots of that and an eye witness here and we are laughing :)) you fucking liar :))

How do you explain this then?

I dont talk without my parrot

i still dont get why you moderate comments if it has “D*in” in it :)) come on with his help we became Invincibles. after all do you really believe Kroenke is better in any aspect? from now on your moderator shall be sensetive to “Stan”, Mr. blog.

I remember reading myles Palmer regularly until the constant negativity just wore me down. At least with blogs and all who post, even on the worst of days you will always find a comment that brings a smile to your face. Keep up the good work blogs. Enjoy the summer lads lots of decent players to watch over the coming weeks

I have a 5 year old son and i much prefer this site to him.

Well done for keeping us informed of all things Arsenal! Keep up the good work!

Congrats,arseblog app is the first thing I check in the morning for arsenal news and a morning laugh, great stuff.

Congratulations on the achievement..! Having some beers will be a good way to celebrate, I think.

Long live the Simpsons references. And thanks for keeping us amused in the off-season!

I was so mad when we didn’t sign Inanimate Carbon Rod!

Cheers! I’ll get fired for being on here at work one day guaranteed!

Only when reading ArseblogNews, I can’t even differentiate which is true or bonkers stuff. And that’s a compliment! Thanks for Blogs and team. Long may it continue.

On a hindsight, a bit sad about that post of Higuain left unpublished… *sobs*

The official website has just announced that this has been changed to Arseblog News’ 29th birthday.

You gays are awesome!

You are a very clever and exceptionally committed team.
Thank you from the heart of my bottom.

PS. If you can do this so well for five years, can’t you get us a fucking striker??

You forgot to mention Rambling Pete and his rambulous rambles!

Thank you for all the great posts, banter, and creativity!

Happy birthday and congratulations to everyone involved with Arseblog and Arseblog News. This is the only truly reliable Arsenal news site on the web. You guys are perceptive, fair, and unbiased, and you present all the news and rumours in a highly entertaining format. This is my first and last web visit every day. Keep it up!

I am one of your biggest fans and have referred this site to many aspiring gooner. Thanks lads. Been reading arseblog since 2009 and as a fellow Dubliner I have to say fair play to yiz.

What is this the fucking bbc? Enough of the navel gazing eh? Congratulations though x

Was introduced to you by a friend around 3yrs ago.
Have read your blog and news articles ever since.
Keep up the great work you do….
?

Just found this from Lord Bendtner from April 2016 I thought it was apt. Arseblog piss off! No waaaaaiiiittttt!!!!! I’m just kidding. Do u know how many of us thrive off of this majestic piece of masterclass Artwork that we know as Arseblog. So Mr Arseblog please keep up ur fabulous work, we may not win trophies every year, we may have not won EPL in years, and we can still recall that final agaisnt Barca as if it was yesterday, so what was I saying? Yea, if there’s one thing I’m hella sure of, it’s that we got the… Read more »

I don’t comment a lot but this post brings a “tear” to my eye. I remember complaining bitterly on Twitter when Arseblog News was launched. My fear was that the daily blogs which I loved so much would end. Arseblog answered my tweet, first and only time ever, explaining that it was an enhanced service. Five years on and I regularly, ok to be honest it’s bordering on obsession, visit Arseblog news. Much less than than the daily blog. Great work y’all have been doing over there at Arseblog. Long may you do your work which makes us so happy… Read more »

Nwakali, a player who’s name starts with N, probably more deserving of a space in your alphabet squad than the guy you selected.

You don’t understand,
It’s Arseblog news the only one to hear it from

You don’t understand,
that it’s Arseblog news or nothin’

Keep up the great work! (and banter)

Thanks Arseblog for all your amazing work over the years. I visit at least 5 times per day.

Wow, everyone’s in party mood. Never seen so few down votes in my life!

Thanks for your dedication, been a reader/listener for about 2 years now. I appreciate the work you do for us arsenal fans.

This website uses cookies to improve your experience while you navigate through the website. Out of these, the cookies that are categorized as necessary are stored on your browser as they are essential for the working of basic functionalities of the website. We also use third-party cookies that help us analyze and understand how you use this website. These cookies will be stored in your browser only with your consent. You also have the option to opt-out of these cookies. But opting out of some of these cookies may affect your browsing experience.
Necessary Always Enabled
Necessary cookies are absolutely essential for the website to function properly. These cookies ensure basic functionalities and security features of the website, anonymously.
Functional
Functional cookies help to perform certain functionalities like sharing the content of the website on social media platforms, collect feedbacks, and other third-party features.
Performance
Performance cookies are used to understand and analyze the key performance indexes of the website which helps in delivering a better user experience for the visitors.
Analytics
Analytical cookies are used to understand how visitors interact with the website. These cookies help provide information on metrics the number of visitors, bounce rate, traffic source, etc.
Advertisement
Advertisement cookies are used to provide visitors with relevant ads and marketing campaigns. These cookies track visitors across websites and collect information to provide customized ads.
Others
Other uncategorized cookies are those that are being analyzed and have not been classified into a category as yet.
SAVE & ACCEPT
wpDiscuz
54
0
Would love your thoughts, please comment.x
()
x
| Reply