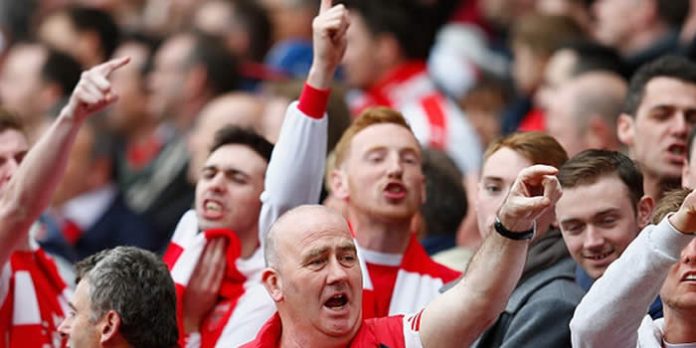 Arsenal have confirmed that away fans will pay just £26 for their tickets next season as price cuts are rolled out across the Premier League.

There was already an accord between clubs that no away ticket should cost more than £30, but Arsenal have discounted that price further for travelling Gooners who will pay £26 regardless of the opposition.

This comes after a £2.50 discount was applied for the last two seasons, but with ticket prices much higher and arbitrary throughout the league, this will have a much bigger impact on supporter’s wallets.

Club supporter liaison officer Mark Brindle said, “We are proud to be able to offer this further discount to our fantastic away fans for this coming season.

“We hope it will make things a little easier for them this season and they see some great games and plenty of Arsenal victories along the way.”

In the statement Arsenal have also confirmed a freeze on season ticket and general admission prices for the next two seasons.

Perhaps it shows the club are listening after provoking severe disenchantment last season with a surcharge on the tickets for the home clash with Barcelona in the Champions League. Ultimately they backed down from that decision after severe criticism, proving a significant victory for fans who showed their voices could be heard and listened to.

The comment that didn't get published on Arseblog News

Come on fella, you don’t want to start publishing my comments, I’m telling you. 🙂

The ong and the hort and the all?

The most I have ever paid to watch a game in my country (Kenya) is about £3.50. I wasn’t happy about that. Before tickets used to cost around £2 to watch the national team! So I feel for you guys in Europe and how much you have to pay to watch the game you love. May the prices keep falling.

A quick Google search tells me the average annual salary in Kenya is $912. Using today’s exchange rate this equates to £683.

By comparison of local earnings in each country. Kenya’s ticket prices are much harder to afford.

I’m Kenyan too. Having watched both ends. Your statement from Google is incorrect. The annual average is USA 3,600. I’m a lawyer too. The Kenyan games are quite affordable but not reasonable as there exists serious security concerns, poor pitches and players aren’t payed proper wages due to various reasons that are not the point of today’s discussion. This is just to inform that we pay for shit services, unhappy players and a dangerous crowd… proper thugs. You are better of campaigning for better prices than be in Kenya’s situation. My experience of the atmosphere is dull so I hope… Read more »

Deserved. Best away fans in the league. No if the home fans could replicate them.

You know, I almost miss last summer when we were linked with all the players. But yeah, away tickets. And stuff.

Good move from the club. Fans deserve better especially the away ones who travel far and give up their time to support this club. Let’s hope the support continues.

Away fans deserve this, but the rest is bollocks. The barcelona price was not ‘surcharge,’ but application of the pricing system in place, no matter how many people did not understood that system (and some apparently still do not understand it). And seeing how many clueless opinions of fellow fans are around, I would rather prefer if the club wouldn’t listen to them that much – and anyone disagreement with this post just proves the point. This whole ‘winning over the club’, ‘having our voices heard,’ and ‘wanting to have our say’ make me really sick, together with the super… Read more »

While I understand what you are saying, Arsenal typically does not address concerns such as ticket pricing, and have traditionally raised prices until the point where this issue has become unanimous among the paying fanbase. Listening to a small group is different than maintaining strong PR with the entire fanbase. It’s a very nice gesture from essentially a brand we believe to uphold morality, good sportsmanship, and have the perfect blend of modernity and tradition. Arsenal needs its support to be unified, and I really love the fact that when it came to this issue, the club tried its best… Read more »

So the away supporters, who already get preference for away tickets, cup final tickets et al, now get discounted tickets too. I’d like some appreciation of what home season ticket holders put into the club, many of us travelling long distances to every home game. We will also have away fans at our games who pay half of our price at cat A games or two-thirds at cat B games. I do appreciate the committed following to away games but I also know that Away ticket holders are selling on tickets for away games just to get their credits. It’s… Read more »

Just to clarify, we hold Travel Club memberships, yes we can book away tickets on them via loyalty points built up, but you/we do not get any entitlement for cup final tickets. We went to 95% of all domestic away matches too.

Away scheme members only get access to cup final tickets I think.

Unfortunately Arsenal is more a company and a business and not so much a football club. And just like most businesses run by capitalistic billionaires it is all about the money. Success in business is not measured in trophies, but in revenue. Wenger has no pressure on him for sporting success from the clubs board, What matters is financial success. If the club set trophies and sporting success at the top of their priority list then there would be no way to justify Wenger still being in the job. But financially the last decade at Arsenal have been a mega… Read more »

Except for the article being about the *business* lowering the price on a commodity that they could likely have sold at an even higher price, yeah.

Glad for this even though I am across yje pond. Atmoshere really does matter for televised games, almost irrespective of the size of the ground. As a partisan, i like hearing the away section. So I am generally for whatever is going to make them feel more appreciated and less exploited so theyare unencumbered by doubt and expectation. (Generally they seem to be less so than supporters at Ashburton Grove, judging from the televised product. I mention it so that it might be addresssed and not to antagonize home support. 🙂 )