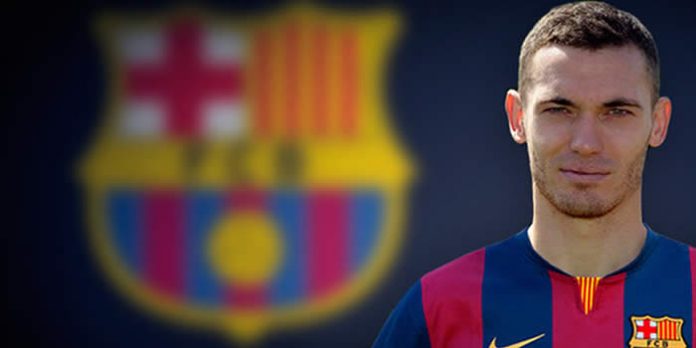 Thomas Vermaelen may have won* seven trophies in his two seasons at Barcelona, but he’s barely played and if rumours are to be believed he’s eager to move to pastures new.

Spanish publication Sport claims the Belgian defender will not be part of Barcelona’s pre-season training camp at England’s HQ at St George’s Park. The Catalans recently splashed out on French international Samuel Umtiti from Lyon and fancy themselves well covered at the back.

The 30-year-old, who spent five years at the Emirates including some months not injured, will spend the next week assessing offers from suitors with a view to making a switch ahead of the new campaign. West Ham United and Liverpool are mentioned as possible destinations while Inter Milan are also mentioned.

Sport make no mention of Arsenal in their article but as is often the way with the internet these days it hasn’t taken long for us to be linked as well.

We’ve not got enough poos on the poo-o-meter to dignify that with a response.

It’s funny, if I had to pick two linked teams without knowing, it would’ve been West Ham and Liverpool, who else would it be?

Everton would be the third name to spring to mind

West Brom are short of a center back or two. Pulis only has about 9 to fill the 10 outfield slots

How would it work if he came back to Arsenal, as a former captain? Re-gain his captaincy? Gain a starting role? Straight to the academy?

Straight down the hall to Dr Kevorkian’s office

We should buy him back (if fit for long term) and sell Mertsacker.

I did enjoy him starting at CB over Vertonghen in the Euros. Bet sp*rs fans loved that

Highly doubt it. He wasn’t exactly cutting it when he left us. Maybe as a stop gap if we are desperate and spent too much on the striker. But we are also linked to Costas Manolas at 25yrs 6’2 from Roma And Daniele Rugani at 21yrs 6’3 from Juventus. What is clear is there is significant effect on who we can bring in at Cback with how much we spend for the CF which is why we have to wait on price to sweat out a bit. Higuain’s price may likely shed but it’s way too high at the moment.… Read more »

I was you 5 years ago speculating like that. Now thanks to poo meter and itk’s its all well and good.

A good point but we need players now for pre-season, not on deadline day. It’s frustrating to see United, City and co. buying now and preparing for the season ahead whilst we dawdle about. We started well with Xhaka but have no capitalised on that.

I’ve heard* that he’s doing a reverse Dion Dublin and is actually converting to a striker, hence the rumours.

*heard actually means made up, a la tabloid journalism.

He did score some good goals…he might be better as a striker than a defender.

Not as the fabled creative, box-to-box goalscoring defensive midfielder? It’s written in the stars (well, that’s what Ivan was saying…)

We’re linked to practically everybody because it is a stamp of quality to do so for the agent. That’s the issue, because when it doesn’t materialise (as it would not since we weren’t in the picture in the first place they then run a piece on a failed phantom bid. And the gullible crowd in the fan base start to get all worked up about it. Even when we do something positive like retain Alexis against a potential Juventus bid, it turns into something negative. Specious rumours are listened to regarding a price point when the club simply said to… Read more »

A mid table Italian side seems the m ost likely place for him these days.

Got tired of winning all those trophies at Barca? 😉 haha just kidding!

Always liked Verma, but i don’t think he can do it at Arsenal anymore, plus he’s unfortunate with injuries. We need to build our defence around Koscielny, hopefully a good enough partner becomes available in the market.

Good luck to vermaelen though, and his beautiful cheekbones.

Kos – Verm partnership will work the 2nd time around! Maybe Solutions can come out of retirement as well!

I was going to say… i get he didn’t play much at Barca, but can’t say he retired 😛 haha.

Why was that never his nickname back in the day?

Vermaelen is a very good defender, and for the most part served the club well in his time here, but do we need another CB hitting his 30s? Do we need one regularly struck off with injuries? A defender, that whilst has a good climb for aerial strength, will still get dwarfed on many set plays and lose duels to towering strikers, something that at times is already our Achilles? As the article alludes to I think even Arsene won’t be monitoring this situation, despite his respect for TV5. I’d far rather see a CB of plus 6’2/3 height, who’s… Read more »

The absolute state of this.

Six and two-third inch? The way you write it leaves room for ambiguity. That smug attitude makes you Sp*rs.

Maldini was 6ft1. Maybe that’s why we never signed him.

Mick B
Reply to  MannyG

@AP If I meant ‘two-thirds’ it would be ⅔, obviously I mean 6 foot 2 or 6 foot 3 as a minimum, I’m sorry if you struggled with that but use some common sense. Besides the height is just one element, if we get a defender who matches the majority of what I’ve said (ie a CB with world class potential who is ready for the first team, but say, 6’0ish but has superb aerial ability) I’d hardly complain. Don’t jump on one point in someones comment. Think I’m entitled to get frustrated when all I’m saying is what I’d… Read more »

I respectfully suggest you need to be more realistic. You basically describe the perfect central defender! That’s going to cost more than you think–none of those guys are going anywhere for less than 30m, probably more–and we have zero reason to think that any of them would be interested in moving to Arsenal anyway (Koulibaly maybe, but as you allude to, we wouldn’t be the only club in for him, which, even if we won that battle, would make him even more expensive). And we honestly have no idea about Hummels. I too would’ve loved to have seen him at… Read more »

I stated that I want a player that largely meets a criteria that I feel we need, it doesn’t have to be a perfect match! I want a defender that has all the key attributes to become a top class CB. Who on earth wouldn’t!? I even then went on to say there are other, slightly cheaper options. Marquinhos, Varane both are unsettled, and yes they have big contracts, and both would normally be closer to £35-40m, but I have a decent suspicion both PSG and Real would possibly entertain opening offers of £30-35m. Laporte has admittedly just signed a… Read more »

I can tell you with some assurance that Laporte, Varane or Marquinhos are going nowhere unless its for £40 mil plus (to start with)

We’re interested in Jeison Murillo who is experienced but at 24, can still learn, going for £15mil. He had the highest interception count in the Copa America.

Its this caliber of defender that we’re likely to get, and I’m happy with that

Normally I’d agree about the fees but both PSG and Real have a couple of big acquisitions they wish to make but are restricted unless they make a few sales. Teams will sometimes drop prices slightly to get the cash they need quicker. By no means am I guaranteeing this, just no reason to completely rule out either being sold a little ‘cheaper’.

Those were the days.

Poor Tommy. Yet another player that left us for the Barca dream now living a bit of a nightmare. If you ignore wages and quality of life etc This Higuian stuff is getting more annoying by the day. £30 million 2 years ago seems a bargain considering the numbers being tossed around at the moment. We couldn’t swallow our pride and find an additional 8 million to get the deal done and now we are going to be seriously shafted if we decide he’s the one that we want. I understand Arsene couldn’t accept Madrid mugging us off at the… Read more »

Unreal. Leave it to Wenger to bring back vermarlen and try to convince arsenal fans that this is good business. A 30 year old perennially injured barca throw away. Why not put in for a true and proper CB such as Umtiti, Koulibaly, or Manolas. Imagine a back four of Koz, Monreal, Bell, and one of these three. Along with xhaka and the Egyptian nightmare protecting the back line. Instead will get vermarlen and that’s if we’re lucky.

The murderous intent in his eyes though…. a staring contest between he and steve bould would end humanity as we know it.

I do feel a bit bad for him. He was injury-free till he came at Arsenal. I think everyone has forgotten that we played him in almost every game in his breakthrough season, then he developed Achilles Tendonitis (like Kos did when we overplayed him) and continued to play him through it (like it seemed we were about to do to Kos) till he broke and was never the same again. He was also unlucky in that though his positioning was poor, he played in one of the most defensively irresponsible Arsenal team in recent years, until Wenger finally decided… Read more »

You, my friend should become a manager.

I see it like this. They owe us a lot of money supposedly. Gibbs wants to leave. Mert is old. Koss will miss the start of the season. Gabriel is still a little bit of a liability.

Let’s take him back for some of the debt they owe us. He fights for a spot, while not costing us much of anything. He can cover LB and CB.

He’s a good guy and was well liked. If he wants to come back and work for a spot, I say sure. It’s no lose on our part.

We should get Stelio Kontos.

He would be bad-ass. Only issue is I’m not sure 2D characters can defend against two footed strikers

Imagine his chant at home games?

His assist to RVP undoubtedly was one of the stangest moment in football. A horrible and indigestible moment for us.