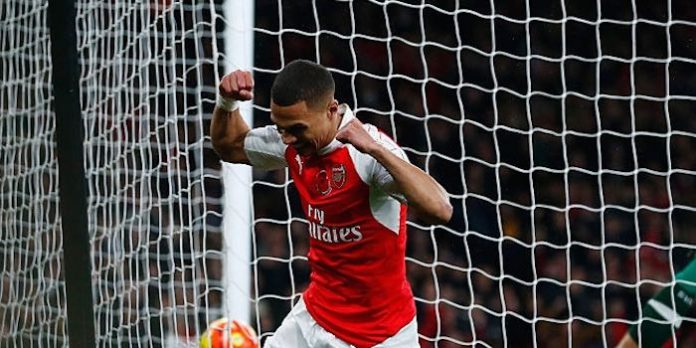 According to the Evening Standard, Arsenal have dismissed an approach from West Ham to take Kieran Gibbs on loan for the upcoming season.

The Hammers are understood to be on the lookout for a new left-back after Aaron Cresswell suffered knee ligament damage and have identified Gibbs, 26, as a possible replacement.

After falling behind Nacho Monreal in the left-back pecking order at the Emirates, the England international made only 12 starts for the Gunners in the last campaign and has been linked with a permanent move away from the Emirates.

Given Arsenal’s need for reinforcements at the back, it’s hardly surprising that we’re unwilling to let any defenders leave the club right now; whether they are entertaining such thoughts or not.

Nacho Monreal has previously featured as an auxiliary centre-back, a state of affairs that could potentially play out again in the coming weeks given Per Mertesacker is injured, Laurent Koscielny is still on holiday and Rob Holding lacks Premier League experience.

Should Monreal be asked to fill a central role, Gibbs is the only viable first team candidate to replace him at left-back.

We should have offered them a loan deal for Theo by way of compensation.

I need some clarity on the poop/non-poop situation.

My understanding was that the poop is a standardised measure of the truthyness of a story.

This one sounds fairly plausible, so surely less poops would make more sense than 8 poops?

the only sam is nelson
Reply to  Arsene's zip

that’s my understanding, at least

Sg_gooner
Reply to  the only sam is nelson

Jasonissimo
Reply to  the only sam is nelson

Right. The poo scale attempts to answer the question, how “solid” is the rumor?

It does not actually seem fairly possible. First of all, as it is mentioned in the article, we need him to play at left back if monreal is needed to paly in the centre. And, even if that situation is sorted out, at this point in gibbs’ career, there is no benefit to arsenal of a loan deal. Either he stays and competes for his position (which probably makes him one of the best second choice left back in the league) or we sell him (if he’s itching for security of regular first team football)

I meant it sounds plausible that West ‘aaaam would be after him, cos he’s fucking quality.

It’s also plausible that we told them to fuck off, cos he’s fucking quality.

Therefore it should be low on the poo-ometer, because it sounds true. Not high on the poo scale because we don’t want it to happen (because he’s fucking quality).

Love Gibbo, hopefully he stays and gets some game time.

On the other hand, Gibbs needs regular game time. Arsenal was on the look for a left back and West Ham knew about this. Why don’t they get Debuchy and use him on left side? Think Debuchy can do it.

So in other words “pass Debuchy ‘pon the left-hand side”?

He’s equally ad(in)ept on both flanks..

Not while we have only one left back apart from Gibbs. Could someone give them Andre Santos’ number?

But I don’t want to play for West Ham

Wenger made it very difficult for Theo when Theo came back from injuries, scored 3 goals in 4 games while not playing well. Wenger denied him game time instead of letting the goals scored give him confidence. I agree with all other fans that Theo has had 10 years to produce and his time is up. Where I disagree is that he does have quality (speed, top quality runs, knows where the goal is, etc…). If Theo had performed like he did the year he scored lot of goals including some Henry specials, everybody would have been lauding him. He… Read more »

I think he’s still a very useful member of the squad – can also play higher up as defensive winger. If he stays injury free I’m sure he’ll get more playing time.

But at his age also understand that he won’t be content just sitting on the bench playing second fiddle. He’ll definitely waltz into most mid table Premier League side’s starting eleven.

Time to step up
Reply to  newxieland

Unfortunately I think his performances last season showed he is content just sitting on the bench. Loads of talent but really needs to step up a gear this coming season. His career is going to just pass him by otherwise…

I see you didn’t put the word ‘Gibbs’ in the headline Blogs. Very clickbaity!!

West Ham can f*ck off as far as I’m concerned. As tax paying Londoners we’ve already paid for their stadium, we shouldn’t be doing them any more favours by loaning out experienced players to plug their gaps. They should do some scouting and (like all other clubs with new found wealth) bid to buy a left back from somewhere else. Tw*ts.

Can’t stands Gibbs. Can only run up and down in straight lines. Even then goes AWOL when we need him at left back.. effectively meaning we may as well play with 3 at the back. Won’t be missed. Sell him

Gibbs is not a bad player but injury has made him unreliable,i dont know why Wenger is wasting time in aquiring another centre back to avoid using Monreal off position.

You know it’s tough times when Gibbs is one of your ‘experienced’ players…………. gaaaaah

He’s 26. Why wouldn’t he be considered an experienced player?

It’s going to be hard for a Premier League team to loan an established player from another Premier League team given the financial resources of the clubs in this market and in light of Leicester’s accomplishment. A competitor is not going to loan you a player for a position you need.

I don’t understand an 8 on the poo scale for this one. If 10 means the rumor is absolutely shit then surely this is about 2? I think it’s fairly plausible that we have rejected a loan bid for Gibbs.

I see where you are coming from, but i think that the poo scale simply refers to the likelihood of the proposed move, generally speaking, and not a commemt on the accuracy of the immediate article.

The story can be written with different slants or perspectives on different days and it would get a bit messy. You could have one story with a poo rating of 1 and another rated 10 and both could mean a transfer is never going to happen. Here, hardly anyone believes Gibbs is going to WHU on loan, so the poo rating should be high.

Two weeks until the season starts and we are talking about going in to the first game with nacho playing centre half !!! My oh my…