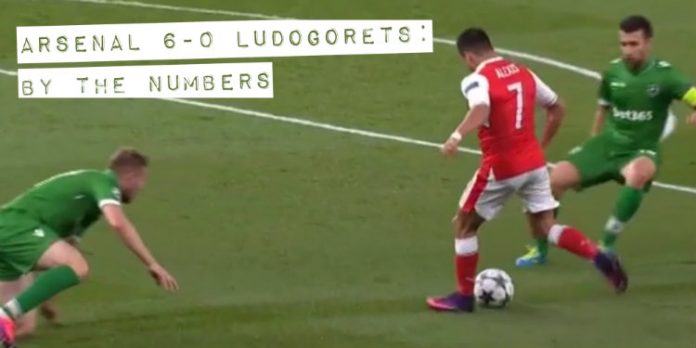 It is my great shame that I share a birthday with Sam Allardyce. And while Sam and I have the same star sign I don’t share his affinity for gum, for terrible football, or for saying dumb things while being recorded. My birthday is, however, my excuse for putting up such a lame BTN: I had dinner and a movie with my daughter instead of crunching numbers. Despite the fact that I didn’t spend much time on the stats for this match I uncovered a few bits that might surprise.

As we know, this summer Wenger courted several speedy counter-attacking players – notably, Vardy and Mahrez from Leicester City. Both players turned Arsenal down but Wenger found a Vardy-like player in Lucas and got a surprise from inside the team when Theo Walcott gave up his pursuit to be the number nine and returned to the wing with a renewed vigor both going forward and in defense.

Whatever the personnel, it was clear that Wenger had a plan for Arsenal this season. Wenger’s dream was to play with speedy, technical players, who can interchange across the front four, create for each other, and threaten the opposition goal constantly. If that was Wenger’s dream then this match against Ludogorets Razgrad was the stuff that his dreams are made of.

Through the first 13 minutes Arsenal dominated possession, making 90 passes to Razgrad’s 57. In case you haven’t been following this column for the last 4 years I will state again that possession is usually just a measure of passes. Uncharacteristic of an Arsenal team, however, the Gunners also won the ball back with aplomb, making 9 tackles, 4 interceptions, and forcing Razgrad into 7 losses of possession. But almost the second after Alexis opened the Arsenal account with a brilliant chip, Wenger flipped the team into a counter attacking side.

From the 14th to the 45th minute Razgrad owned the majority of the ball with 245 passes to Arsenal’s 154. Worryingly, Arsenal allowed 5 shots in that time forcing Ospina into two pretty good saves. Arsenal also did something unusual in that period, they pressed and tackled to win the ball back with 17 tackles to Razgrad’s 14. Coquelin was the standout with 5 tackles in those 30 minutes. And the whole team won the ball back in the passing lanes, winning 14-3 interceptions in that period.

Walcott scored Arsenal’s second and after that the Gunners grew in confidence defensively. Again Arsenal conceded possession, giving Ludogorets 302 passes to Arsenal’s 213. But crucially, Ludogorets had 5 shots in the second half compared to Arsenal’s 10 and none of their shots were in dangerous areas — all were on the edge of the box or further out. Meanwhile Arsenal were shooting in and around the 18 yard box.

This is textbook counter attacking football from Arsenal in the second half: concede possession but win more tackles (19-14), win more interceptions (12-10), and force more turnovers (19-9) while creating more and better shots. Nothing sums up that second half performance better than Cazorla creating a goal with what Opta marked as a long ball, through ball, fast break, assist.

Happy birthday, @7am!
As usual, great piece of article!

Well, I give a tip of my hat to Ludogorets for playing openly and not parking the bus.
That’s a bold move to play against Arsenal at Emirates.

They were definitely brave (and maybe naive). But the key in this match, and for all future matches against minnows, is scoring early. Then this sort of game plan can be executed.

An umlaut for Öx – that’s some accolade!

To put the season so far in a statistical perspective, last night took us to 32 goals in the 12 games of the season so far. An average of more than two and half goals per game. It’s not only the attack blossoming, because on the other We’ve conceded 10 goals in twelve games (the L’pool game being an outlier). We’ve kept 6 clean sheets out of the 12 games played so far. Onwards and upwards….looks like the team is building consistency.

Six of those ten goals conceded came in two games – Liverpool and Swansea. So just four goals allowed in the other ten matches. Not bad at all!

“I don’t share his affinity for gum, for terrible football, or for saying dumb things while being recorded.” So you’ve never been part of the Arsecast recordings then?! Haha! I jest of course and refer not to the general chat on it but more to the ‘special events’ like the great marmalade tasting event of the year! Before you lot start thumbing me down and I feel like Fatgooner (I strangely miss him but we can’t expect him to pipe up in times when it’s going so very well – our play at the moment doesn’t exactly back up his… Read more »

Can this be seen as a defensive drill for tougher matches – thoughts?

Still some work to do defensively I think but Mustafi is fitting in really well. Question – would Arsene have signed him if BFG hadn’t been out long term? I think that he would have baulked at the price and we’d be relying on a young prospect in Holding in important games.

Happy Birthday
Why is Mesut impersonating Thumbsucker Kane when he scores?
So many positives it’s Happy Happy Joy Joy
Big up to my pal Kevin and his newborn son Freddie

I guess it is the other way round

HB 7am you are sexy

I loved the artistry and pure class in movement, technical abilities and the passing masterclass that was put up at Emirates last night. I´m watching the highlights for the 4th time and still finding something new to enjoy.

Ozil had 19 assists last season in the EPL. with the Stats above I’m guessing he got none in the UCL last year?

Coquelin the boss tonight and MOTM in my honest opinion!!!
Gunners to the world but the world is just not enough!! COYG!

A Different George
Reply to  Jo

Watching the first half a second time, I was struck by how important Coquelin was and how well he played–much more apparent than when I watched the game as it happened. 7am’s stats really confirm that. Many happy returns.

Really impressed by Lucas. Hope he gets to start this weekend as some of the guys need to rest and recharge. Onwards and upwards!