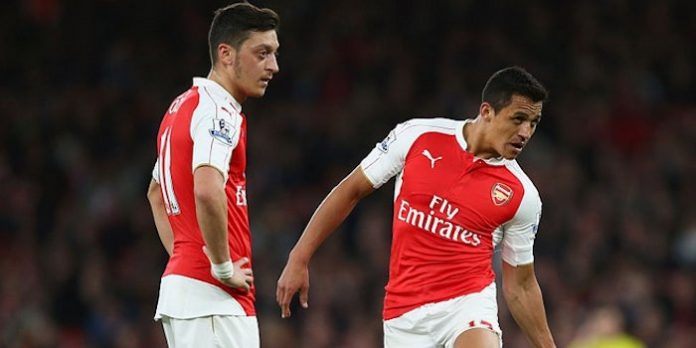 Mesut Ozil and Alexis Sanchez have been included on the 23-man shortlist for the title of The Best FIFA Men’s Player 2016.

FIFA recently pulled out of co-organising the Ballon d’Or with France Football to create this new ‘official’ award. In our opinion, it has a really, really sh*t name.

The winner will be determined through a combined voting process, in which 50% of the decision will be based on the votes of captains and head coaches from national teams around the globe. The other 50% will be split between an online public ballot with football fans and submissions from a selected group of over 200 media representatives around the world.

Yep, Arsenal fans…we’ll get a chance to ruin this for everyone with our vote-happy tendencies. The winner will be announced on 9 January.

Having missed out on nominations for the Ballon d’Or, this news will come as a welcome relief to Ozil and Sanchez. No doubt they can both expect hearty congratulations from Arsene Wenger, even though he’s made it very clear he doesn’t give a fish’s tit about such matters.

Here’s the full list of nominees. Quite rightly, it features no Sp*rs players.

No place for the scum!

But, the award for the most insects eaten in single bike ride goes to … ?

Is there a supercup where the BEST winner takes on the Ballon Dor winner… or of the same person has both titles the winner of 1 vs runnerup of the 2nd or if thenrunners up are different people then they play off in a super cup qualifier.

Getting a bit rediculous really.

I’d probably watch Ronaldo fight Ronaldo to the death for that title.

I suspect the line to get tickets to that event would be huge!! Ronaldo would still have one or more of his posse camp out at the ticketing outlet to make sure he had front row seats to his own event.

Can I take a fiver for Ronaldo to win?

That’s one hell of a squad, albeit a little attack-minded.

So if we’re going to fix this, we need to answer the toughest question….Mesut or Alexis??

Somehow, as is the curse of Arsenal’s number 7 to Sp*rs (Bobby, Tommy), Alexis will score a hat-trick on Sunday. But I’m voting Ozil. He’s been our best player the last 12 months.

Alexis involved in more goals and assists than Mezut, and Sanchez is not the n°10 of the team!. Alexis sometimes have low performances without making goals, but always producing danger or supporting the team defence. Mezut sometimes vanish from the field, no assists no goals no defence. Yes, he makes wonderful goals, but always assisted by other player, not Alexis that sometimes creates them on his own.

I will vote for whichever one of them that is closer to renewing his contract with us. But which one?

We vote for both and let the coaches decide the winner?

If you include his Chile contribution I think Alexis wins it hands down. He’s much more important for Chile than Mesut is for Germany.

If only looking at their contributions to Arsenal I’d rate Mesut slightly over Alexis.

For a start,football is a team sport and individual awards mean fuck all. I don’t understand the hype with awards and such. If it were possible, i’d love to have people like Robben and Neymar nominated for an Oscar instead. That makes more sense than these nauseating Ronaldo vs Messi Balon d’ Or battles.

In any case this year it should be Lewandowski.

Finally, a chance for fans to chip in to have their say. I’ll vote everyday just to make very sure. (even though Arsene isn’t into individual awards…)

Wait. I can only vote ONCE in each category? Damn!

Multiple votes? You hereby qualify to vote in the US election

Which set me thinking: is there a non-football award with nominees featuring Donald Trump, Jon Moss and Sp*rs wage-earners?

Was looking for the Manure vs Fenerbahce Highlights and i was confused that they wernt there when i typed in champions league highlights then i remembered that manure is in the Europa League. Ha.

Just think – Manure has the most expensive footballer in the world…who plays in the Europa league. Go figure.

Just think: Manure have scored ONE premier League goal in October.
And now their fans have to vote in a “Goal of the Month” competition

One defender (Ramos) and one, possibly two, defensive-minded midfielders (Kante and possibly Kroos). Quite a tribute to Kante.

GoonerAbroad
Reply to  A Different George

What’s the block voting theory for gooners? Sanchez 1st (purely because of he was Copa America player of the tournament), Ozil 2nd and maybe Bufon 3rd as goalies never get votes? We’ve got to be tactical, guys.

Which one to choose?:
Alexis involved in more goals and assists than Mezut, and Sanchez is not the n°10 of the team!. Alexis sometimes have low performances without making goals, but always producing danger or supporting the team defence. Mezut sometimes vanish from the field, no assists no goals no defence. Yes, he makes wonderful goals, but always assisted by other player, not Alexis that sometimes creates them on his own.

Whoever signs a new contract first gets the block vote. 😉

I only get one vote? – Opens 100 incognito windows to create 100 new Gmail accounts – take that FIFA. I’ll show you how to corrupt a democratic process

I think we can congratulate FIFA’s bae, Messi, already. I’m with Arsene, I couldn’t give two shits about individual player awards.

I will surely be voting for Sanchez

Pretty sure Messi will win this one as well anyway…