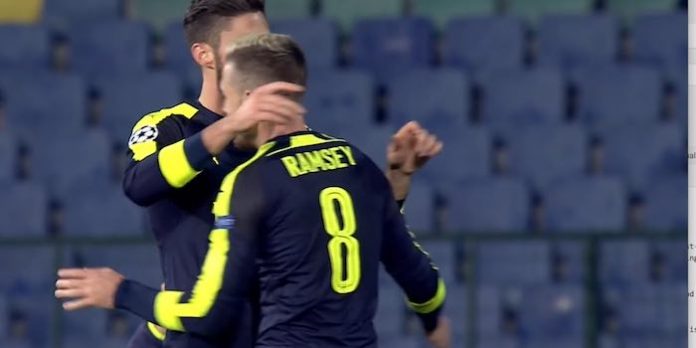 Aaron Ramsey says the playing time he got against Sunderland and Ludogorets have readied him for Sunday’s North London derby.

The 25 year old played 75 minutes against the Bulgarians, and has two assists (one accidental in fairness!), in his two two games back.

Speaking to the Standard after the game, he said, “I’m ready to face Tottenham. I wouldn’t have been out there starting last night if I wasn’t ready. It was great for me.

“I’ve been out injured for a couple of months now and it was nice to be back starting again and getting 70-odd minutes. That will put me in good shape going into the weekend and hopefully I can stay fit.”

If Theo Walcott is fit, as expected, he’s likely to play on the right, so it remains to be seen if Arsene Wenger feels the Welsh international is ready for a game of this intensity in the centre of midfield.

Lest we forget though, he did this at White Hart Lane last year.

We suspect he, like Giroud, will be an option from the bench – and with three goals and two assists between them in the last two games, what very nice options those are.

I do too. 2016 Ramsey reeks of smug entitlement and vainglorious hubris.

I love him, but could seriously do without the Captain Hollywood moves.

Would hate to be in the manager’s shoes r.e: picking the 11 for this weekend. So many of our players are in scintillating form and some big names are going to miss out. Very tough to predict who’ll play.

Sub in Giroud/Rambo if we’re chasing the game. Sub in Gibbs for one of the wingers if we’re holding a lead.

Remember Sagna’s header a few years ago in the 5-2 win! Some more of that please.

Iwobi has to start. He has better ball retention and dribbling abilities. Can’t imagine starting Ox and Theo just yet so it has to be a fit Theo who guarantees more goals

I could get used to football commentary in German.

I do wonder if Ramsey will provide a similar option on the flank, and alternative, to Iwobi. More of a playmaker, happy to link up with Ozil and Sanchez and play in front of the opposition defense, as well as getting in behind. He may not like it but a place on the wing is going to be alot easier to fight for this year than in the centre.

Any news on Santi, anyone?

That’s good Aaron but don’t expect to walk into the first team. See this too often with him and Jack. Always been their problem, Wenger has treated them like royalty so they expect everything on a plate. Need to get their heads down

Every squad member would kill to get game time. Love this new attitude.

I’m really glad Rambo is back again, I absolutely love the lad and his attitude towards the game. Always passionate to play and eager to prove himself worthy of the shirt.
Whilst he may not be in the starting XI for the game against Sp*rs, he’ll at least get a run out as an impact sub and hopefully pull out something like that goal last season.
So keen for the Derby but I have an exam the next day :S
Oh well, Arsenal trumps my education, so let’s COYG!!!

I’m not sure we should play him. Tactically it didn’t work out too well to have him last night even tho he played a good individual game. I wish he would consider the team more though. He’s a fantastic player and if he would play to compliment the team rather than play for his own personal gain we would be helped out greatly.

Could you tell me what you mean by good individual game? He made one good cross. Other than that he kept doing pirouettes, slowing breaks down and generally giving ball away. Even blogs is acknowledging this morning that he slows us down. Someone else said yesterday he ran around a lot. So did Brian Talbot

Stringer Bell, I didn’t want to be too critical, because I feel like that might not be good for the discussion of him because it might alienate people who like him (I’ve gotten lots of downvotes on previous comments on my frustrations with Aaron) I also think that he showed some qualities yesterday, ie, willingness to show for the ball and decent enough vision, that would suggest that if he were playing centrally he could have helped the team. But what he did offer was purely individual and didn’t help the team in any way. All in all though, I… Read more »

Ramsey’s place is on the bench. Average footballer

I would very much like to see him given a run in midfield alongside Elneny or Xhaka at some point. His best form for us came alongside peak Arteta, someone who looks after the ball well and is intelligent in terms of positioning. I think Mo and Granit come closest to replicating Mikel’s skill set.

There’s no way he should walk back into this team. He will upset the rhythm and that was evident last night. (Granted there was a few changes) but I think Ox should still be ahead of him right now. It fucking pisses me off how Wenger always tries to shoehorn him back in, usually in place of somebody who has been consistent or in form.

I absolutely agree with you and I fucking love your name

He is actually the only player in the squad right now who scares me. Because, as you rightly said, he is always pushed into the first 11 even when better alternatives are there and destabilises the rhythm of the team.

Oh dear, i hope wenger is not going to throw the balance of the team off just to play ramsey, the sunday game is not a game to try and see how he fits into the team, let him work his way back into this team like every other player

Maybe as a sub on the 70 minute mark,,, but NOT before and from the wing. His passing can be far too sloppy, he doesn’t read the game well enough at times and he slows the the pace of the game down. As you guys above, I don’t want him shoehorned in at the expense of the team…..I do not consider him a true team player….

Nope. You are not ready lad and you shouldn’t be so arrogant as to think you can just walk straight back in, prove yourself with better team play as well, I like him but he’s a selfish player and that’s his downfall. Think he’ll upset the balance. Unless of course he wants to come back as 2014 Ramsey then that’s fine.

Could be a very influential player. That’s two assists in as many games and he is just back from injury. Granted right side of attack isn’t his best position BUT most people are generally wrong when they feel we are pacy ONLY with Alexis up front and without Ramsey on wing. We are pacy because Bellerin (and now Gibbs on other flank as option) can push up better with Mustafi covering. Both wingers be it Walcott and Iwobi or Ox and Alexis have license toi cut in deeper or join in the box. This makes it somewhat moot whether Giroud… Read more »

Usually I’m on your side when you defend arsenal players but I have to disagree with you here. We are pacy because of the speed demons we possess on the wings. Walcott-bellerin combo is usually too much for teams to handle. Walcotts blistering pace stretches teams and bellerin himself can exploit space with his own pace. It’s not that we are ONLY pacey with Alexis, it’s that we are far more useful with our pace when he is there (and to an extent the first half of last season when Theo was there). I am a firm believer in giroud… Read more »

Ramsey expects too much, he will definitely be on the bench hopefully behind the Ox.

Ramsey gave the ball away soooooo much!

It’s diabolical to even think of playing Ramsey in most PL away games. At home regardless of who we play our football has always been free flowing. Ramsey brings something there. But playing Ramsey in away games that require a certain defensive focus is a risky proposition. The only position where Ramsey’s full potential can be used is playing strike. His desire to score, his energy and offensive intelligence can terrify opposition. I think Ramsey is more of a Muller type than Lampard.

Haha so spuds. Here’s to a thrashing this weekend.

Now they can really concentrate on the PL title ?

Oh Ramsey. Such an intriguing player, one who has at times been shit as fuck, and then becomes fucking world-class, and now, somewhere in between. What are we to do with him? I don’t fucking know.

People never learn. Ramsey is a great player and if ever he always walked into the team it was more to do with Wenger preferring a system with a midfielder on the wing or poor formfrom other players. That is no the case now but he is a good option from the bench. Should we be losing and he comes on and gets the winner, I certainly wont be shocked because he’s a real talent. He’s fresh from injury, did quite well in the Euros and WHEN he picks up, will do well when injuries, substitutions and poor form hand… Read more »