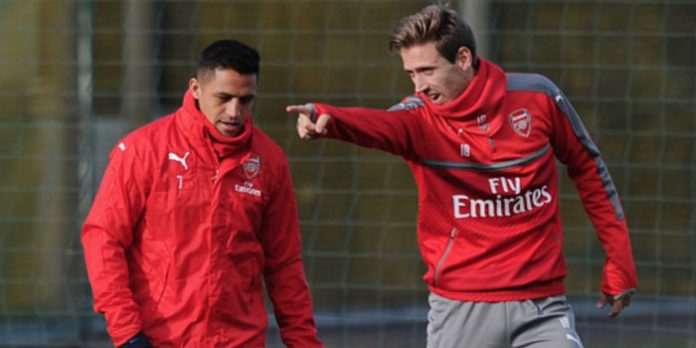 Nacho Monreal says Alexis Sanchez is a ‘complete’ player and the driving force behind Arsenal’s rich vein of form this season.

The Chile international has reaped the benefits of playing regularly as a centre-forward, scoring 13 goals in 20 appearances and helping the Gunners to the top of their Champions League group and the upper echelons of the Premier League.

“He’s such a complete player,” Monreal told Arsenal Player. “He’s very good in the air despite the fact he’s not the tallest. He has a great shot on him, his positioning is very good. He chips in with the goals and really, he has everything.

“What I would say is that it’s his ambition that makes him such a great player. He just wants more at all times and for example, if he gets subbed off when we are winning 3-0, he’s not happy because he wants more, he wants to play more and he wants to keep improving.

“That’s good for him, because he keeps pushing himself and it’s good for the team because it obviously gives us that driving force.”

The great form of Alexis is heightened by the fact that Mesut Ozil is also playing some of the best football of his career. The German has added goals to his vaunted reputation as the Gunners’ assist king; a state of affairs that Monreal believes has other clubs worried.

“Both Alexis and Mesut have been around in football for a long time now,” added the Spanish full-back.

“Everybody knows what they can do and I have to say, we are privileged to have them in the team.

“I think all of our rivals when they are preparing to face us, they really have to spend a bit more time preparing for those two.

“Mesut, for example, he’s the player that threads the play together, and Alexis is a really complete footballer.”

“if he gets subbed off when we are winning 3-0, he’s not happy because he wants more, he wants to play more and he wants to keep improving”

That’s the spirit of a champion

Or a would-be champion with a hamstring problem

What is with the comments today ?

you were just talking about alexis … doh

“Threads the play together”. I, for one, love that description for Ozil.

Monreal is arguing up their salaries too?

He should be their agent!

So does his agent.