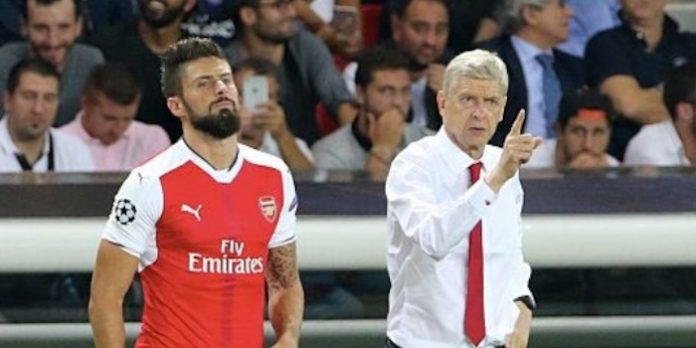 Arsene Wenger says he wants to keep Olivier Giroud at Arsenal, but has more or less told the French international that his time as the undisputed first choice striker is pretty much at an end.

With Alexis Sanchez playing brilliantly as the team’s centre-forward, Giroud has had a frustrating campaign thus far. He arrived back late from the European Championships, picked up an injury which set him back, and has stared just two games for the Gunners.

However, he has shown his worth, scoring five times, and the Arsenal manager still considers him an important part of the squad.

Reiterating his desire to offer new terms to the 30 year old, whose contract expires in 2018, he said the former Montpellier man must come to terms with the new reality of Arsenal’s forward line.

“If you have only one striker, the press says ‘why don’t you buy another striker?'”, he said.

“I want him to stay but, if he signs, he has to live with the competition. He has to decide if he can live with what is going on, but personally I like Giroud very much.

“You cannot keep them all happy but our job is we produce every weekend unhappy people.”

Earlier this week Giroud’s agent denied that his client would be seeking to move on in January, and there’s no doubt he’ll be an asset for us this season.

Whether he’s willing to accept the role of super-sub in the longer-term is another question, but for now let’s hope he keeps chipping in with the goals.

Check out this week’s Arsecast

I can’t imagine Giroud let go. Not now, when we are doing so well. Let’s remember Alexis also had his bad days, especially last season. They both must stay!

remember the invincible
Reply to  JackyBoy

to be honest, and I feel bad for Giroud, his role should be as a super-sub. He’s not a 30-goal a season striker but he is a very good second choice who will get games. He could be more, but his finishing hasn’t been upto the mark when he’s started games. He’s much better as a finisher when he comes off the bench. It’s a strange one but that’s how it is.

He is 30 so he has to decide if he wants to rotate in on a great squad or lead the line for a good squad. I sure hope he stays for a couple more seasons at least.

Giroud is such an underrated player. He’s got us out of a pinch many times. Sure he’s got a different game than dribble-through-crowds strikers but a goal’s a goal.

I like Giroud a lot and his goalscoring record is very good. However he is one-footed and slow.

So I wouldn’t mind if he moved on if we had a great alternative. Otherwise happy to keep him if he is willing to fight for his place and keeps up his form.

If I was Giroud, I’d be content with coming off the bench for 20-30 mins a week as long as we go on to win the league, otherwise it will feel like a wasted season for him.

Giroud is an awesome player and has been great for the gunners but it would be hard to see him stay past the summer window.

Alexis is a much better player than Giroud. But Giroud is a slightly better striker. I think, if a time comes when we just need a striker on pitch never minding other aspects of the game, Giroud will come handy.

Giroud is the best first touch finisher in the EPL the last three years. Just search YouTube for the clip compilation. He works so hard off the ball and brings so many players into the game with his hold up play. All he lacks is consistency. He’s a different player to Alexis and it’s already been proven to be effective to bring him on in games where Alexis struggles. Two 6ft + defenders hate dealing with him compared to Alexis and when they need bullying… Giroud can facilitate that.

Giroud is a good impact option off the bench, and it would be great for us to keep that option.

Ofcourse he would probably be a starter for most clubs outside of the top 6, so he needs to make a decision of either staying put as a backup and off the bench impact sub with the possibilities of winning trophies or going to a smaller club and playing every week.

Yes he is slow and one footed but how many set pieces have we converted?

Even if we get a ‘better’ player to replace Giroud doesnt mean he would fit in, Might even be a flop. Giroud brings another option to our style of play.

I hope he stay and keep the compitition going.

I love our striker options at the moment, and soon with Welbeck coming back they are going to be even better. Remember when Manure won the treble, they had Sherringham, Cole, Yorke and Solskjær!

They’re both class, but Giroud is a much different player than Alexis, and because they’re so different in style, both of them are crucial to Arsenal’s game plan.

I’m particularly fond of Olivier Giroud because he puts in an honest shift each time he comes on. He it was who led the line when Robin van Persie left us in the lurch. Honorary mention also goes to Lukas Podolski. And that is why I will never criticize either player till time’s finality.

Giroud is a parallel to Edin Džeko.
Those were Džeko’s finest years as a player– being the number #2 man on title-winning teams.
Ego needs to take a back seat to potential silverware/honors.

i understand if he wants to leave but i always thought he would’ve at the very least put up a decent fight for the striker position. all those years he claimed that he would welcome the competition if arsenal bought another striker, what did he thought we would buy ……….another sanago. he hasnt had a decent run due to injuries and he is already planning to leave. i would love it if he will stay , i always appreciated him as a player. he is not the best but he is unique and that will be an asset for us

Who said he’s planning to leave?

TBH I get very angry whenever I see our own Arsenal getting on Giroud’s back when his contribution, especially in terms of numbers is excellent. Sure he ain’t the quickest but he does his job, which is to score goals. The same set of critics would scream at Arsene to sign him after the Euros if he isn’t already at the club given how effective he was for France. He’s extremely underrated and seriously, he’s our player! If you don’t like him, you don’t have to give him hell, it won’t make his job any easier.

Great to see the positive Girroud comments, great player, he’s got to be part of this team for us to take out the PL.

Olivier should always come from the bench,supersub

Glad to hear such thing.

I’ve been saying it forever.. Sanchez should’ve always been centre forward with Giroud in backup against the teams where a target man is essential.
It’s starting to work!

He should be what solskjaer was for manure. Stay with us as an impact sub and win lot’s of titles

Really want Ollie to stay, would love to see us experiment with a 3 5 2 with both Ollie and Sanchez together, something like: Cech Gibbs Koscielny Bellerin Xhaka Coquelin Ox Ozil Walcott Sanchez Giroud We’ve got Xhaka and Coquelin covering the back three, width in Ox and Walcott to stretch the opposition with the pace of Gibbs and Bellerin providing the overlap Ozil will do his thing, and let’s be fair, all of our forwards have a decent cross in them and can pick out a pass. So we can play to Girouds aerial ability which is first rate.… Read more »

How can you dare leave mustafi out the starting line up

I don’t fancy playing with just the one centre back and bellerin would be a much better option as a wingback than either of the ox or Theo. If this 3-5-2 business works for cunte’s Chelsea then loads of people will be using it next season, just like the 4-5-1 a few years back.

Not suggesting in the slightest that we line up like this every week, as an experiment may be interesting to see how a 2 up top with Giroud and Sanchez would work. I imagine when opposition teams see our line up with Alexis or Giroud up top they decide on how they might play a certain way to try and nullify the threat posed. In the instance where we have both, who do they pick as the person to nullify. Which is partly why I suggested direct players such as Theo and Ox as they also provide a goal threat.… Read more »

HFB has carried us through some heavy seasons as our only striker and we’ve seen him sometimes buckle under the strain. Although berated by many for not being the “world class striker” they demand him to be he’s soldiered on and given everything. All things considered he’s a fine player with good character and I hope he stays with us long enough to lift a PL trophy. He’s earned it!

Prolonging his career with sub appearances and early round cup games etc might not be a bad way for him to go, especially if he can negotiate a wee bump in salary. I’m sure he’ll continue to pick up the odd league start too over the course of a season.

He has been fantastic for us, very consistent too season by season, and for 12m?! I’m fully behind the guy whatever he decides, but I hope he stays.

I rate OG very highly, solid pro. Have not seen his type since Sparky Hughes, able to hold incoming balls with back to opposition goal and then play on by himself or to others.

Giroud doesn’t have to come on the last 20-30 mins, he has to be on the pitch especially when the opponent parks the bus. Be it half time or before the match, all the coach needs to do is analyse the opponent and determine who fits the team better.

Again there’s little understanding to what Wenger is trying to spell out here. What he is saying is that the days of us having only one realistic option up top are over. We now have options. Giroud is not a second option rather he is one of 3 (4 with Welbeck) options we can employ to break different teams and defensive set ups down. Alexis is not going to be effective up top every game. He isn’t going to score and sometimes we will need the big man whether he starts or comes in later is subjective. When you consider… Read more »

Remember that even though Giroud is 30, he didn’t join the top level until he was 23 or 24. So I’d say he still has several years in him.

Giroud’s pace may be in question, but he brings energy, attitude, and desire to the pitch…. We need him