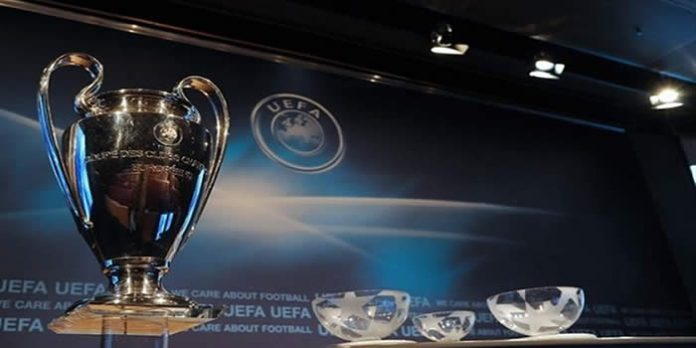 The group stages of the Champions League are now done and dusted. Arsenal, of course, finished top of Group A after the 4-1 win over FC Basel.

The draw for the knockout stages takes place on Monday morning after a load of interminable, tedious, backslapping rubbish from that baldy geebag, but the big question is: Who can Arsenal draw for the first knock-out round?

Please not Bayern, it’d just be so boring playing the again. You’d rather not play Real Madrid, even if they’re not the strongest Real Madrid you’ve ever seen.

The rest, you’d certainly fancy your chances. Let’s hope the hot balls aren’t against us on Monday.

Annndd it’s gone, its all gone..

Afterwards, in the dressing room, Ozil and Sanchez renew their contracts with us for another 5 years practically end their careers with the Arsenal.

It will surely be Bayern.

We most likely to draw Real Madris or Sevile. If you look at the possible teams we can draw, of the 8 group runners up, one is Man City who we can’t face, and one is PSG. Therefore we can face 1 of 6 clubs. Now look at eg Real Madrid – they can’t face Barca or Atletico Madrid,nor can they face Dortmund (same group).They can therefore only face 1 of 5 clubs. Following this on, each club can face between 5,6 or 7 clubs. Thus, Real Madrid have a 1 in 5 chance of facing us – and if… Read more »

It’s actually a lot more complicated than that, although you’ve made the right start. The other factor is that as the draw progresses, the number of opponents left available to each team decreases differently, depending upon who’s already been drawn. Fortunately, someone who’s smarter than me has already done the calculations, and here’s our exact chance of playing each possible opponent:

I’ve watched a lot of Sevilla this year, quality outfit, obviously not to standard of the big 2 but if we’re asking for favours id like to avoid them too. 50/50 chance of a ‘good’ draw, but we’re arsenal so it’ll be buyern.

Only this time we’ll beat the bastards eh? COYG

I’ll get me coat.

Doesn’t some little fat wanker play for them that has done nothing but slag us off since leaving us? Just the team I’d like, just to set a record straight!

I thought a lesbian played for them? Woops

Yep Sevilla are the dark horse of this comp. Sitting in 3rd spot in La Liga behind Real and Barca and are two points ahead of Atletico. They are playing some great football at the moment.

Is it where Nasri is now?

i saw the sevilla match against barca. they absolutely battered barca in first half and its only due to messi’s individual brilliance at second half and sevilla wasting away too many chances in the first half that barca came won the match. sevilla are always good but this year they are different beast

It’ll be Bayern. Looking forward to going out on away goals.

You going to knock one out to that?

Not Another Heroic Night of Failure!

Sevilla, it’s going to be.

Playing a Europa League qualifier in the Champions League is just so Sp*rsy.

Howard Webb predicting arsenal to get into the finals 0_o woah

Reverse jinx doesn’t work if you speak your intentions out loud.

I’d like Seville. I’d love to knock Nasri out. The cunt.

Do you mean knock him out of the competition or just in general? Either way, I can get on board with your programme.

Gotta beat the best to be the best. Bring anybody out of that six on. It would have been much tougher if we had finished second.

That Madrid and Dortmund game was a bloody good watch though. Good attacking football throughout.

Yes but it would be nice to have an easier task to get through the last 16 for once in the champions league.. A difficult draw just makes it more.. Difficult

I’m hoping for Real Madrid! Be nice to get a glamour tie.with our squad we shouldn’t really be fearing anybody! (Injuries permitting!)

Be nice to get one over on Benfica. They broke our hearts back in 1991, thought we had a really good chance that year…

Make mine a Swiss miss
Reply to  H18ury

Glad to see someone remembers we owe those fuckers one. Still sticks in my throat 25 years later. Time for a dish of revenge served nicely chilled.

Arsepedant
Reply to  Make mine a Swiss miss

After that many years, I don’t think it would be so much “chilled” as “close to absolute zero”.

We have a history against Benfica, not a good one if memory serves correctly, so would be a good time to put that right as they have to be the weakest of the lot on that list, right?

I dont think bayern or real madrid are as strong as theyve been in recent years. Neither team really recruited big names this year to strengthen.

We are sure to get one of these two in the next round based on our luck. But if we can be defensively solid with the kostafi partnership, id back our attack to get some balls in the back of the net home and away.

Gonna have to beat the big boys at some stage. Itd just be nice to get the last 16 hoodoo off our back. But id love to meet them in the next round.

TH14 at the bernabeau. Could be TW14 at the Bernabeau this year.

Ain’t there a rule against continuously been drawn to fight the same team over and over again? Honestly, Bayern again? Even neutral parties wouldn’t want to see that.

Bring it on,no fear!We are ARSENAL.

Wenger vs Zidane: Battle of the French Legends

By the way, Is there footage of Wenger post press?

Have a look on Arsenalist

Based on how they played in their last few fixtures, I’d take real madrid, but by the time the cl games take place, everyone will be fit again and their defense wont be as creaky.
Leverkusen is the ideal draw imo, though, since we can’t draw Leicester.

Since 2006, we’ve played the following after finishing top of the group
’06 – Real Madrid – Thanks Thierry, that was some run
’07 – PSV Eindhoven – Fuck you Fat Alex
’10 – Porto – Bendtner hat-trick
’12 – Milan – Van Persie miss in the last minute to take it into extra time. Fucking shoot for fuck sake, trying to dink it over like a proper little cunt. You’re not Sanchez, dickhead.

We haven’t won the group other than those times in the last 10 years.

Bring it on, plenty to cheer about. Thanks Ludogorets

Speaking of bad misses, I just came across what I think is the worst (and therefore have to share it!) :

Oh dear lord what a shambles!! Thanks for sharing

Piresrocks
Reply to  A Gorilla

That rant on RVP made my night

Nothing interessting to read here
Reply to  Eddee

Dortmund can’t play against Real Madrid because they were in the same group.

Close, but Dortmund can’t play Real. This would be good, though:

And in a perfect world, we beat Leicester in the final. And in the Spursday Night League, Ludogorets knock out Spurms in the semi-final and then beat Moronho and his crew 8-0 in the final.

Balls will be hot as fuck and you know it.

Just give us any team.
Bayern and Madrid can leave it for the next round.
I will love to go thru the second round first before we show our intention in CL

Would like Benfica so we can kick their arse and get pay back for 1991. But also would like Sevilla so we can ram it down that far faced traitors threat after how he slated us and forgot the team who made him!

But other than those two who I’d expect us to beat with the second leg at home, from a fans perspective who will be travelling to the away leg, I’d love Bayern or Real Madrid! Great couple of days away, and genuinely fancy our chances playing first leg away!

I meant to type fat faced not far faced! Although both probably describe Nasri anyway! His face is fat, and also it’s so fat that one side of his face is FAR away from the other side lol. Never wished any sportsman to get hurt or injured before, but can’t pretend I wouldn’t have a cheeky smile if he ripped his hamstring failing trying to track Alexis back while he smashed one in the top corner! ? But that’s what traitor money grabbing wankers bring out in us I suppose

To be the best, you have to beat the best. Let’s get it done with.

I like the spirit of this oft-repeated sentiment, but you have to admit the logic is faulty. You don’t have to beat ALL the best teams to win it. Some potential paths are relatively easier. Sorry if that makes me a pedant. Give me a weaker team now and then the weakest team possible in the next round over the giants now…

Hope we draw Madrid and knock them out 🙂

Seems like we have more of a chance of playing Real Madrid or Sevilla, since both those teams already can’t play 3 of the other 1st place teams – Barca, Atleti and whoever finished top of their groups…

Most likely to get Madrid

We seen last year that drawing a lesser team its not always the best I think arsenal play better as underdogs most important thing is to keep things tight in first game away use coq..xak..elney..and a front 3 Walcott Sanchez wellbeck that would give us lots of speed on the counter ps..sorry ozil but sub for this one

I’m still convinced that somehow we are going to end up with Barca.

Sorry, Özil stays unless we can find better. I cannot think of anyone in European football who would be a better playmaker now that he has added goals to his game.

Using your argument you might as well swap Alexis for Cavanni and use the excess money on improving the squad!

I cannot see that the squad needs that much of an improvement unless Dr Bryune or Hazard become available.

Unless we can sell him for a ridiculously high price and buy someone of the same level for cheap what’s the point? And what’s the likelihood of that happening?

Screw that. Bring on any team. we’ll rip em’ apart. I hope its Real Madrid TBH.

Bayern would be good.
We’ll beat them, this time instead of unerestimating Porto.
We’ll confidently go into the quarter final

I fancy our chances against any of these fuckers.

Uefa will mess up somehow and we will draw Barcelona

And both legs will be away.

My order of preference would be this:

I bet we end up with Bayern or Real though. I’m not too keen on getting drawn against Sevilla either. They’re pretty handy in European competition, given they’ve won the Europa League two seasons in a row. I know that’s a step down but it shows longevity and there are a lot of decent teams in the latter stages of the Europa League… and Sp*rs.

Ozil is good but he rarely plays well against top teams

That’s three stupid comments in a row from you. Just stop.

You shouldn’t be called arsependant it should be arsehole

what happened during the benfica game in 91?
we got robbed or something?