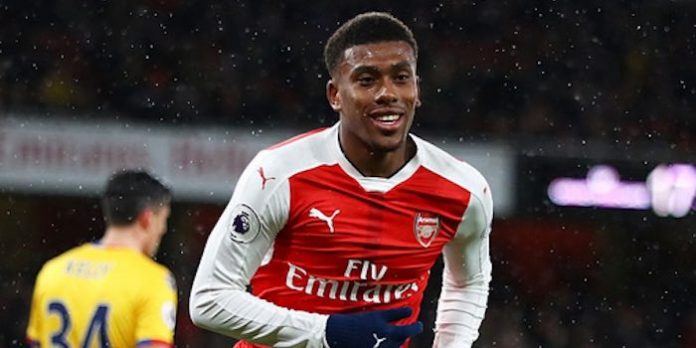 Alex Iwobi scored his third goal of the season on Sunday as Arsenal beat Crystal Palace 2-0.

The Nigerian international headed home in the second half to give the Gunners the cushion they needed for the rest of the game, and Arsene Wenger believes there are more goals to come.

Speaking afterwards, he said, “I believe he is always available, quick in his movement, wants the ball, can hold people off.

“People forget he’s 20 years old. I think he had a very good game – on top of that, now he starts to score goals. His quality of pass, of availability, is exceptional for a young boy.

“He lacked a bit of quality in dangerous areas and I hope that these goals he scores now will give him the taste as well to go where he can finish it off.

“I’m sure he will score as well in the games.”

Iwobi has become an important part of the team now, and his appearance against Palace was his 17th start of the season, with 5 further appearances from the bench.

How did Iwobi rate? Check out our player ratings and leave your own

I thought Iwobi looked a lot more comfortable in the centre of the pitch than he does on the wings. He was more aggressive on the ball, and while his touch still leaves a bit to be desired, his general movement and ball control looked very good today. We’re only just beginning to see the brilliance of this kid.

uhh what are you talking about his touch is great. his ability to receive the ball with back to goal and make quick half turns is one of his biggest assets.

Agree Max. Great first touch. He perhaps lacks a bit of pace, some footballing intelligence and his shooting could be better but he has the potential to be a key player for the team.

King of everything south of Zamunda

Iwobi his last goal this season that’s for sure!

onenil
Reply to  Easy as JVC

Why would you say that?

It’s a pun. Iwobi as in it won’t be his last goal! If you have to explain…

gooner of Oz
Reply to  Easy as JVC

Why man? Just why

Obiwon scores when he likes.

The range of sharp, incisive passing from Iwobi is phenomenal. And I see him taking his craft to the #10 position soonest.

My favorite moment was when Zaha – who was spending half the game on the ground and sulking – decided to go shoulder to shoulder with Iwobi and ended up getting decked. Was so good.

Great talent and he doesn’t get injured every other week like some other great talent that has come through this club in recent years. That is going to help him develop even more and reach his full potential. Hopefully I did not jinx anything now 😛

On a sidenote, Jürgen Klopp supposedly interested in David Ospina, And lets face it, With a decent goalkeeper Liverpool would be top of the league right now. Really hope we can hold on to Ospina though, Cech is not getting any younger and he is not the goalkeeper he used to be.

What are they smoking over there at Liverpool?

Is he off to bless the rains in the Africa Cup of nations, does anyone know?

Luckily for us — and for quite a few other PL clubs, too — Nigeria didn’t make it to the AFCON finals. Big surprise, actually.

No rains in Africa, mate. Global warming and whatnot.

The “Africa” on mainstream media or the Africa I know? Get it together. By global warming I guess you mean the smog in China.

Iwobi could end up being our best player

Yet another gd goal from iwobi the header

The less hyped of our youngsters claims a place in the starting 11. Quiet and hard working.

I feel it might have been a blessing in disguise that England didn’t call him up from the junior teams for that reason. There’s less pressure and hype from the media, less talk of “he needs a move!” or whatever. It’s clearly affected Ox and Wilshere but it’s not just them. The abuse Sterling gets in the media. All the hype about Alli. Ross Barkley in general. It’s a complete circus and luckily Iwobi gets to avoid all that and just focus on his game

“Can hold people off” Exactly! That´s one of the things I love about him. The guy is 20 years old, but is strong and shows no respect. Like yesterday when he shouldered Zaha off like an ugly coat he didn´t want to wear.

Agree with the quiet and hard working comment. Hope he keeps it up. But he seems to have great physical & technical qualities too. He reminds me of Rocastle (a bit).

Made up for the kid…. needs a song now though! Something to the let it be tune (Beatles, Diaby)perhaps?