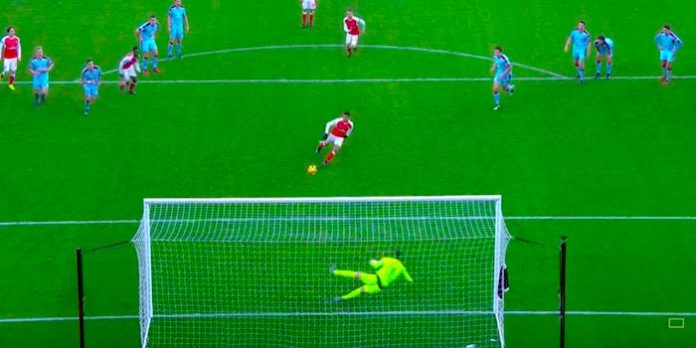 It’s the 97th minute. 10 man Arsenal have just been drawn level by a penalty. An offside Laurent Koscielny is kicked in the head and referee Jon Moss points to the spot.

The first choice penalty taker, Olivier Giroud, has been taken off, so it’s down to Alexis Sanchez, a man who has never scored a penalty for Arsenal.

A man, in fact, who has missed penalties for Arsenal. Do you go hard and left? Hard and right? Low? High? No, you chip it down the middle and go celebrate near a banner with your dogs knowing you’ve won the three points and won the game 2-1.

Balls of steel. And Arsene Wenger was asked about if afterwards.

“He’s missed penalties for us. He was in fact not the first penalty taker for us – it was Giroud. He was second, but as long as you score, you just have to accept it and say ‘well done’.

Well done. And thanks. And nice one. And cheers. And I love you. And ‘Do you want some more puppies? We’ll crowd fund some puppies for you!’

What a finish. What a man. What a dog banner.

How did Alexis rate? Leave your rating on our player ratings system.

Anyone who doesn’t like the dog banner is a little bit dead on the inside.

7 minutes of added time? Where was that coming from???
It’s a SCANDAL, but fortunately went in our favor.

3-4 minutes for the stretcher, 2 for the red card, and 30 seconds for each of the subs … could have been more.

The 7 minutes time was warranted because of a 3 minute injury stoppage in the second half, coupled with 6 substitutions, a red card, and a goal. If anything, 7 minutes may have been slightly conservative

Well said. After all the stoppages, I was actually expecting eight minutes to go up. It ended up being closer to nine minutes anyway because of the delays over the two penalty kicks.

Only one dog hater so far!

I mean, the guy has done it in a Copa America final vs Argentina to win his country the first trophy in decades. Like he will be scared to do it vs Burnley at Home haha

He doesnt look like a man on the verge of leavin the club to me. He worked hard again for the team all game, and when he scored… that face… thats not the face of someone wanting out.

Hope you’re right though he only has one speed, which is part of what makes him a special player.

Also watch closely at the end when the whistle was blown, watch alexis closely down the flank how much it means to him that arsenal just won it with the final touch, and how much the 3 points mean to this team. As everybody was making videos of his behavior at the last whistle at Bournemouth and Swansea, well now they can make one from this game so they can see it how much it means to him that arsenal won it. If they say he celebrated was happy after scoring the penalty and people other than arensal fans saying… Read more »

Also seeing Coq jumping up and down and chesting another Arsenal player on final whistle….. the team was pumped.

Look at his reaction as Alexis scores in this video: http://arsenalist.com/f/2016-17/arsenal-vs-burnley/fan-view-of-alexis-penalty.html

I absolutely love the guy. Pundits say you need players with passion to play for the club, then reckon you should sell the most passionate one out of the lot!

I think passion is a very underrated asset. Sure you still need to be a very good player, but that passion brings a little bit more out of the player.. and can really lift a crowd at home which in turn lifts the team which in turn wins games.
Thats the theory anyways.

Passion is often a shorthand for a lot of the psychological elements of the game, which are almost as important as the physical ones.

He took off his shirt and threw it into the crowd. I can’t remember seeing him do that before. He knew it was a special day.

Hey was so gutted when Burnleys pen went in. Haunched over on hale way with his head down completely alone. Amazing how a mood can change in four minutes

Alexis also did a panenka to win the Copa last year for Chile. It was pretty woeful attempt actually, but he hit it so badly it beat the keeper. Did nobody at Burnley watch the tape?
Memo to Alexis: they’re onto you now mate, so DON’T DO THAT AGAIN.

Nah. He can do what he wants. He has earned it

There are some miserable tuckers out there. I just read some dross on online gooner and cultured left foot. Made a decision never to step into that ? again

I like the banner, I find it funny….however, folks are entitled to dislike it as well. It’s not that serious

Only one alexis sanchez.
Burnley fans and Sean dyche must absolutely hate the sight of koscielny now- he’s done the double on them.

Petr Cech will never save a penalty

Petition to remove links like “How do you rate…”. Making the blog look like Metro or Daily Mail-esque

I want to raise a puppy in honour of Alexis’ wonderful penalty today, and I shall call it Alexis Sanchez Puppy.

Ebo
Reply to  The Little Mozart

Don’t forget your hat either.

The 3 points were critical

Media anointed challengers Liverpool and Spurs had mucked it up

Chelsea have to play Liverpool next and something may give

Then we get a shot of cutting the deficit further

“Banner Day for Alexis”. I called it. Heh.

…that banner of course.

Cometh the hour, cometh the man. Alexis can be a legend if he stays with us.

Alexis can become a legend if he stays with us imho.

What a player, need to keep at all costs

Show Alexis the money. We need to keep him!

Gabriel is a beast.

See him after we were awarded the penalty. Completely mental.