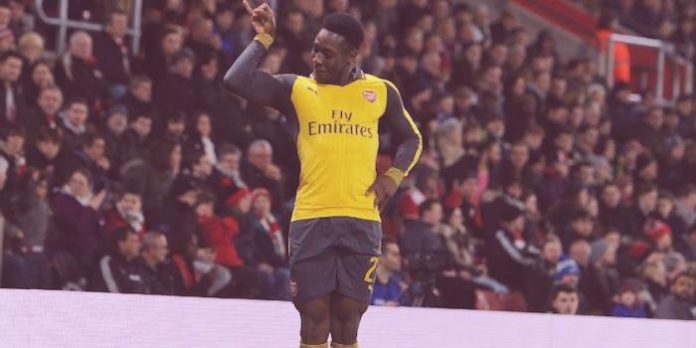 Having been out of action since last April with his second serious knee injury in as many seasons, it would be understandable if Danny Welbeck took some time to get back to his best.

It might still be a while before we see him at full-flight, but last night the England international showed he’s out to make up for lost time with a very tasty brace on his first start since his return earlier this month.

The 26 year put away a brilliant Lucas Perez pass to open the scoring, then showed his touch hasn’t deserted him when he doubled the lead from an Oxlade-Chamberlain ball over the top.

Afterwards, Arsene Wenger described Welbeck as a ‘special guy’, and said he didn’t expect him to make such an impact so quickly.

“I knew that he worked very hard, but you never know how much efficiency there will be,” he said.

“It shows as well, when you are able to transform that frustration of not playing into efficiency, that’s a special guy.”

He also praised his character and how hard he’s worked to come back after what was a devastating injury blow last year.

“He went through some moments of very deep disappointment,” he said.

“When he had the setback and we had to go in the knee again, when you’re a professional football player, that’s absolutely difficult.

“After the first disappointment, he became even more resilient and worked even harder. He’s highly respected inside the club because he has shown so much dedication, never moaned, worked very hard and tonight everybody is delighted for him.”

It’s great to see him back and scoring, fingers his crossed he gets the breaks he deserves in terms of his fitness now.

Read today’s Arseblog: The Bould and the Beautiful

Love having him back. Going to be interesting to see if we keep him on the left at the expense of Iwobi. He does bring much needed physical presence to the forward areas in lieu of Giroud

Hope his positive attitude is rewarded with a good run of fitness and form culminating in glory the Arsenal!

We should alter the Ozil song for when we play United:

Imagine him scoring the winner at Old Trafford and doing the salt bae at Mourinho.

would that be rubbing salt in the wound?

i’ll get my parka…

I fucking LOVE Danny. He’s my favorite player at the club right now, if he could stay fit he is a major weapon.

“After the first disappointment, he became even more resilient and worked even harder. He’s highly respected inside the club because he has shown so much dedication, never moaned, worked very hard and tonight everybody is delighted for him.”

you could directly say “debuchy” mate.

Always thought Danny had good technique for an English player. But he also brings that old united graft with him.

He’s the perfect blend of Alexis’s mobility and Giroud’s muscularity.