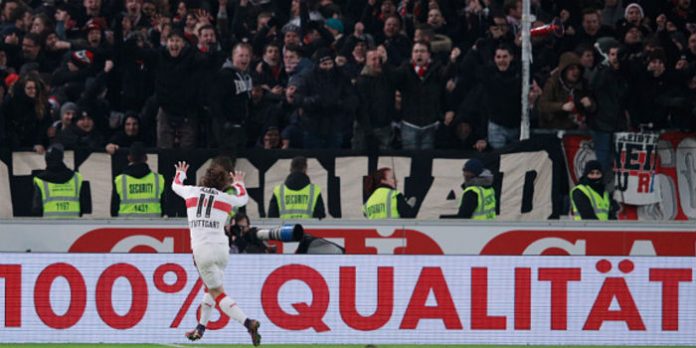 Takuma Asano is frustrated he’s not scored more goals for Stuttgart this season, however, his coach, Hannes Wolf, says the Japan international is proving ‘very valuable’ to the Bundesliga 2 leaders.

The 22-year-old agreed a move to the Mercedes Benz Arena in the summer after signing for Arsenal from Sanfrecce Hiroshima and has since scored two goals in 15 league appearances.

Reflecting on his form in Germany, Asano told Kicker.de, “I’m not really happy. It is important for goalscoring players to score goals.”

“It bothers him much more than me,” said Wold in response. “With his speed and quality he’ll go far as a forward and will also score goals.”

Stuttgart’s technical director Jan Schindelmeiser has also been impressed, noting: “He is extremely hard-working, ready to run in both directions and he also creates opportunities for the others.

“When he make runs from deep there are spaces for others to take advantage of.”

Elsewhere, David Ospina says he’d like to play more first team football at Arsenal. The Colombia international has been confined to Champions League football this season, although rumours suggest he could usurp Petr Cech this weekend after the Czech’s gaffe at Chelsea.

Speaking to Direct TV Sports, the back-up keeper said: “I’d like to have more regular game time that I don’t at the moment have at Arsenal. That’s very important and it’s something that’s been in my mind for a while.

He added: “With Petr we have a great friendship, he’Is a good person. We both know that the other wants to play and these are decisions that must be respected.”

As much as I love cech I would like to see wenger be abit cold hearted with some player, maybe give ospina ago, Gibbs too perhaps?

Ospina to start this weekend. Thumbs up for agree, thumbs down for disagree!

Cheers for clarifying the thumbs up/thumbs down system, man! ?

Obviously cech is still a top gk but this pattern of hardly ever keeping clean sheet is worrying me a little but ospina scares me as well. I don’t know who I’d choose and that’s why I’m not a manager and just a fickle fan! Whoever plays, I’m behind them.. COYG

The inability to save a penalty and getting beaten on near posts is also worrying.
You have to give him credit for the assist for Cesc though.

No keeper is supposed to save penalties, and Cech actually has a better career record than Ospina on penalties, so it’s pretty picayune to make that into a bone of contention.

If no keeper is supposed to save a penalty, then why do they bother standing between the goalposts when the kick is taken?

I’m not bothered about Cech’s career history. I’m bothered about what he does now. And his form and level performances are way below expectations for a keeper that was supposed to save us 10 points a season.

I agree in principle GK’s stopping a penalty is a bonus, not base expectation. But man, I really wish Petr would just stay put for the reaction save and at least have a solid chance at the ones that go straight up the middle.

Who knows, knowing that option is gone he might at least cause a couple to miss with the lower % tries.

Yeah but if he stands still for a penalty then it just looks like he isnt trying if the striker hits it into a corner. Penalty kicks are definitely getting harder for keepers to save now because they have so much information. The keepers almost know too much. They now know where the striker has hit his last 5 or whatever penalties, and any good striker knows that too, so they definitely play on that decision making a lot I think. And iI think it potentially clouds a keepers mind, so they don’t focus on the moment and try and… Read more »

Its very refreshing to see someone realize himself as a fan than being like a crap nonsense guy who thinks he knows more than a guy who spends the entire day training with the keepers.

reminds me of an invincible german guy ….

Let’s give Ospina a chance

Cheq was one of the best keepers in the world, but he has declined a lot, I think its time for ospina ,he needs a run of games,its time for wenger to get strong and drop players who are not performing …cheq..coq..ozil..Walcott

“It bothers him much more than me,” said Wold in response.

This is a nice man.

Asano looks alright. One to keep an eye on, for sure.

Slightly wierd goal celebration though. Still, if he comes to play at Arsenal, I’d be more than happy to see it.

Wouldn’t it make sense to give Ospina a run out in the league before the game against Bayern.

About Asano I just think it will be the same as all japanese players that come to Arsenal… you know. For the other matter, even by being colombian I think Cech is a more complete (but not too much) goalkeeper than Ospina. They both have their advantages and disadvantages, so I think Cech is still capable, but if Ospina is given the chance I will be happy because he has the level to be the No.1 at the club… we’ll see.

Also give game time to that Ainsley kid, he looks very solid.

About the GK situation .. buy Joe Hart .. sell Ospina .. move Cech to second choice .. Szczesny to remain in Rome for another 4 years