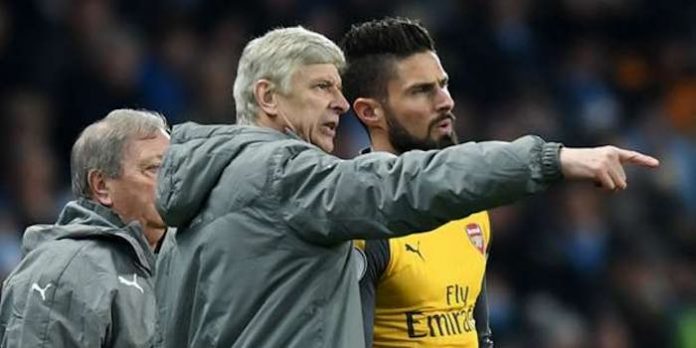 Arsene Wenger says he’s heard nothing from Marseille regarding Olivier Giroud after reports emerged that the Ligue 1 side had targetted the Arsenal man for a summer switch.

The French international has scored 13 goals from 14 starts this season, but has also made 19 substitute appearances – the most he’s ever had since joining the club in 2012.

It speaks to a more peripheral role in the squad, but the Arsenal manager wasn’t entertaining the prospect of his departure at his press conference today.

“I have had no approach from Marseille,” he said, “and we want to keep Olivier Giroud at the club.”

Giroud signed new terms in January, perhaps the more cynical might suggest it was a move designed to maximise his transfer fee at an age when values tend to diminish.

With the Gunners facing Leicester tomorrow night, the Frenchman was asked if he had any regrets over Jamie Vardy’s decision to turn down a move to Emirates last summer.

“Transfers, successful or not successful, are part of it,” he continued. “You accept you are in a job where you have to accept the decisions of the players and he made that decision, that I respect completely.

“After, you move forward and you look at something else.”

I think it it the right time to move Giroud on and bring in a good replacement TBH.

Jamie Vardy wished he was playing for Arsenal. I am sure.

Who ever down liked this! Is not a Gunner!

I disagree, I think Vardy is as happy as Larry at Leicester. He’s happy being small time.

Maybe someone at Arsenal should give Marseille the club’s phone number? 😉

And previously when I said “we need an upgrade on Giroud” I got all thumbs up!
Is that fickle or just plain weird?