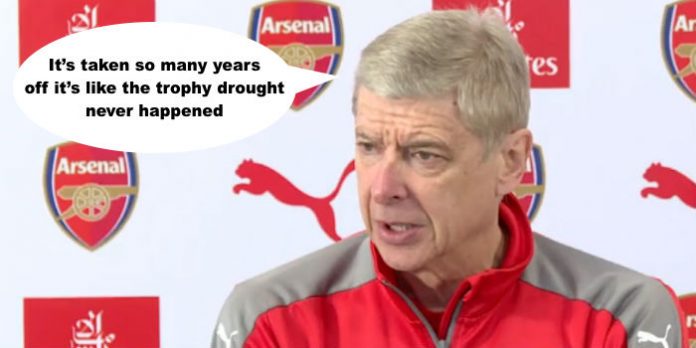 Arsene Wenger has had a haircut.

The Frenchman, blessed with a healthy head of luscious greying locks, appears to have treated himself to trim since the Gunners beat Manchester City at Wembley on Sunday.

While it’s not known who undertook the cut or where it took place, Arseblog News is led to believe the boss asked for ‘a tidy up around the back and sides and a bit off the top’.

Despite an uncertain future and being under intense pressure the 67-year-old, unlike other attention-seeking peers, opted against having a harsh, close crop that could have led to suggestions he’s preparing for war in the final weeks of the season.

Of course, Wenger’s new ‘do’, unveiled at a press conference on Tuesday morning, comes in stark contrast to the cornrowed look sported by right-back Hector Bellerin at the weekend.

The ‘buzz’ in Spain is that Wenger’s conservative style highlights a growing tension with the Spanish right-back that could see the 22-year-old try and force a ‘perm’anent move to Barcelona.

That suggestion is obviously ‘undercut’ by the fact the Academy graduate is ‘knot’ a ‘fringe’ player at the Emirates having signed a new deal in November that keeps him at the club until 2023.

Arseblog News is also aware that despite trying to lure Alexis Sanchez to sign a new deal at the club, at no point has Wenger teased the Chilean with a promise to sign his international teammate ‘Vidal so soon’.

It’s just a little bit of fun fella. Wenger is still head and shoulders above the rest!

come on guys, let’s not split ends about this.

a different George
Reply to  BendtnerChamakh

This just proves that Sunday was a tactical masterclass from Arsene. It’s clear that he grew out his locks in the weeks leading up to the game so he could convey dominance and mentally rattle Pep, who is bald.

Apparently Pep is bald. Spread it around.

Agent Arteta will make sure Pep is forever rattled.

The haircut is a definite and irrefutable sign of him signing a new contract and spending big big money this summer.

Bet he’s got an elite penis too.

Please ask for help now. It may already be too late.

If I could characterize our season as a haircut I’d say it was a cygan, fuck all up top, fuck all on the sides and fuck all at the back

Reporter: “Is this an indication that you will be going ‘3 at the back’ for the foreseeable future?”

Can this mean we are planning a swoop for Ibrahimovic from Man Bunited?

I approve of the word play.

Truly a cut above.

You’d better brush up on those hair references.

Is this just a snip it of what’s to come?

Any update on the hairline fracture injury’s in the squad?

I thought that the game against City was a bit of a ‘close shave’ but was happy that Arsene still had it in him to ‘mop’ up the situation. It’s a shame we are still in the dark about his future, I’m sure he’s not actually decided yet and is just needing time to ‘mullet’ over.

I’m sorry, I’ll see myself out.

That was decent, bit of a ‘fade’ at the end there and in surprised there were no jokes about the ‘chop’

Hang on, that’s my coat!

The bravery of the manager knows no bounds. The balls to get a haircut at a time like this. Who does that?. He really doesn’t have the time to be sitting in a barbers chair. I hope he at least kept Kylian Mbappe’s parents on loud speaker.

As for Mourinho, I thought it customary to be shown your new do prior to leaving the premises. His decision to withhold judgement until sitting in a public place was a bizarre and ultimately unwelcome one as his level of disgust is as obvious as the photo suggests.

Now is the time to groove..Arsene says!

I was actually sat next to him in Nicholas in Whitecross St. I can confirm he was also offered an eyebrow trim and ear hair removal both of which he accepted. There was no offer to do his nasal hair though. He took a hot towel and was charged 14 plus a 2 pound tip. 3 points for the weekend he joked as he left the shop. Ithen followed him all around Waitrose.

By The Eyes of Özil

Sorry don’t believe this article is true… I’m going to “comb” through some resources to check the validity of this story..

Apparently the barber was heard asking if Arsene if he “wanted something for the weekend”?
Arsene replied “yes a win against the Spuds”.
Amen to that! 🙂

I’m delighted for the fans who were there and those who had more faith than me. Wenger does manage to rally players and the key move may be the 3 at the back. That looks a very sensible move but we need a better midfield two. The Totts midfield dominated Kante and Matic yesterday and it is hard to see Ramsey and Xhaka or Coquelin or Elneny doing that . I’d like to see Theo start at Wembley with Sanchez moving forward in place of Giroud. Theo gets goals against Chelsea.

What kind of a cut do you want? Let me mullet over

“I’m sure what my next haircut will be. You will know soon.”

He must think he’s a cut above man city

David Plait would be happy with that hair do

Anyone else fears for Bellerin’s form if it further follows his hairstyle trend? Reminds me of the dark days of Gervinho and Adebayor.

The other day, my girlfriend (26) asked who is Arsene Wenger (my fake gmail name) so I showed her a pic of da frenchman. She told me “wow, he is handsome for an old man!”

Never realize it that Wenger is a pretty decent looking bloke, a lil homo