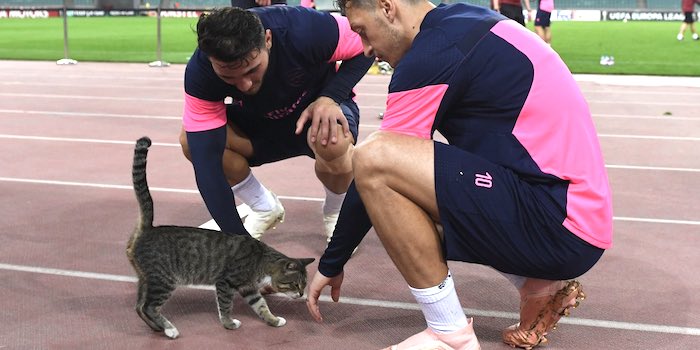 Arsenal have moved quickly to snap up Cat after the animal impressed yesterday during training ahead of tonight’s Europa League clash with Qarabag.

The furry friend joined in as the players were put through their paces at the Azersun Arena, and head coach Unai Emery was so taken with him that he immediately got on the phone to new Head of Football Raul Sanllehi to insist the club make a move before somebody else harnessed his talent.

The Spanish executive ran the idea past the Head of Recruitment, Sven Mislincat, who was delighted at the proposal and a deal has been sanctioned.

The Gunners will pay 48 cases of pilchards, a scratching post, and an eight ball of catnip every month to Cat, although the details of the transfer fee itself were kept highly confidential.

Speaking to reporters ahead of the game, Emery sounded delighted at the new arrival, and tipped him for big things in the future.

“Sometimes an opportunity presents itself,” said the Arsenal boss, “and you have to be ready. We were whiskers away from losing him to another top European side.

“We’re all feline very good about this transfer, and he will help us play that tippy-tabby football we strive for.

“Thankfully he didn’t insist on any ridiculous claws in his contract.

“Everyone thought I was kitten when I suggested the deal, but I was deadly serious.

“Not only is good in attack, but defensively he’s so strong, going through opposition like they’re ragdolls, and I’m sure he’ll be persian for a first team place very quickly.”

Cat is expected to link up with the academy on arrival back in England where, under the tutelage of Purr Mertesacker, he’s expected to be a truly pawsitive asset in the years ahead.

Wake up Mustafi, its over.

I believe you mean Mousetafi?

Or do you mean meowstafi?

The Cat is coming for Shkrodent.

Jean definitely got more than 9 lives, which is why he keeps surviving.

And all I did last night was watch tv… Good to see someone else is producing.

48 cases of pilchards? The game has gone mad.

English sides always have to overpay in the market….

Seeing as we’ve already got the nephew of Danny John-Jules in our youth squad, it seemed like only a matter of time before we signed Cat as well.

Let’s all take a paws to consider how long it must have taken blogs to whisker up this treat, and not look a gift horse in the meowth.

I’m feline good this morning having scratched the itch of my arsenal mews.

A purrfect start to the day.

Can’t wait for Cat to furfill his purrtential with us.

One pussy in, one pussy out?

You can tell Ozil loves stroking good p….
Nah I couldn’t do it.

My wife wouldn’t let me call my cat Purr Mertesacker, so I’m glad that gag has got an airing

My mum’s cats are called Dennis (Bergcat) and (Catrick)Vieira. We almost went for Purr Mertersacker..

Get a chicken.. at least you have something if it doesnt performs.

You should’ve pleaded with her. “Purrrrdy please?” Could’ve worked.

Let’s see the funny article when ozil and sead come down with toxiplasmosis….

The cat is expected to produce the performance on the pitch and also with confidence that every moment on the pitch is important for us and for the effing Cat.

The secret is out at last!

You mean the cat is out of the bag?

The bunny is out of the hive

Why can’t The Emirates have a cat FFS

Yes, Highbury had a squirrel at least. Well we have Gunnersaurus but not sure he counts.

Mouse Sissoko can confirm the cat, he plays with aggressivity and personality

Its suspicious how other media outlets have been keeping this signing a secrete.Anyways thanks Blogs for letting Cat out the bag.Media these days.

Does he have a squad num yet?

i hope he delivers …..i mean kittens

If he delivered kittens, that would be a miracle beyond anything in the bible.

This type of news is why I pay for the neighbour’s internet.

Should’nt have put it in the wash.

That furry coat will be most useful on a cold night in Stoke…oh, wait.

He may not look like much, but I hear he’s a tiger on the left wing.

He literally prowls up and down the wings.

Or sleeps at the corner all day long. You can bet the media would jump from Ozil to him in no time

The official site reached out to former players, and among them, anders limpurr was very impressed by the signing of cat.

Well this surely must have blown our transfer kitty?

Finally… our Cat-alyst for change!

Jeez, what am I doing with my life?