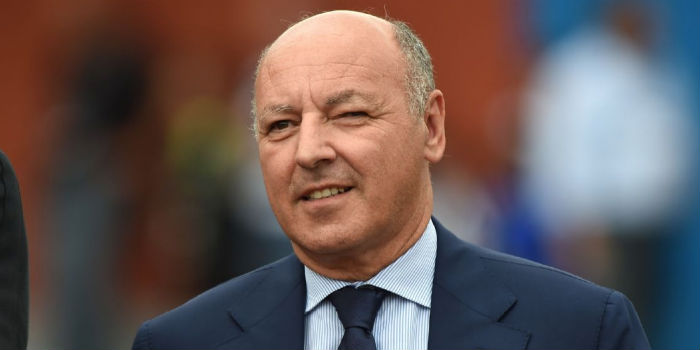 According to reports in Italy, Beppe Marotta has been approached by Arsenal about taking over from Ivan Gazidis as the club’s CEO.

The 61-year-old announced five days ago that after a trophy-laden eight-year stint as CEO at Juventus he’ll be relinquishing his position at the end of October.

“The club is carrying out an extensive renewal,” Marotta explained in a statement on Juve’s website after the win over Napoli.

“My mandate as chief executive comes to an end on 25 October and the list of board members, which will be presented on Monday, will not contain my name.

“For the time being I will remain in place as chief executive but I wanted to make this statement in order to avoid any speculation. I will assess my position along with the club president in the coming days. I’ve had eight wonderful years here, full of success, and Juventus will always remain in my heart.”

Tuttosport claims that the Gunners tried to steal a march on other suitors by tabling a €3.5 million a year offer. It’s not clear if that’s a pre-tax salary or not. If it’s post-tax, that would outstrip Ivan who was on £2.6 million plus his bonus.

The report claims that Marotta, who has overseen seven Serie A titles, four Coppa Italia trophies, three Italian Super Cups and two trips the Champions League Final, has weighed up taking a sabbatical but would rather dive straight into another project where he can make use of his considerable expertise.

For all Arsenal’s efforts, early indications are that Marotta is more likely to follow Gazidis to the San Siro. Whether that’s to Inter or AC Milan, remains to be seen; apparently, they both want him (How many CEOs do AC need?!). Moreover, the likes of Roma, Napoli and Manchester United are also said to be keeping tabs on the situation.

Basically, Marotta is a man in high demand and it sounds like we’re far from being favourites to snap him up. Still, it’s interesting that we’re putting feelers out for a specialist in football rather than giving the gig to Josh Kroenke straight off the bat.

A couple of weeks ago, Arsenal took the first step towards filling the impending Gazidis void by giving Raul Sanllehi and Vinai Venkatesham increased responsibility and new job titles.

Sanllehi: Arteta is the perfect person for us

Pictures: Josh Kroenke at Arsenal training as Freddie takes over

If we really are going for Morotta then I like the direction a lot of things are headed – finding a highly qualified & experienced CEO would hopefully allow us to significantly expand our commercial revenues (that stream has really only grown as the bigger PL has grown so there is still significant room for growth) and hence the funds available to the footballing side. I know this part will be a lot more mixed but I also like that the club appears to have taken the decision that Ramsey & Ozil simply can’t co-exist and have decided to rectify… Read more »

It sure seems encouraging that we go for Marotta instead of appointing Josh Kroenke straight away. If however we end up with Josh, it would be even more disappointing, as it would suggest that we failed to find a proper, football-wise successful CEO, and opted for Josh.

Not trying to find something negatively though. If we end up with anyone but Josh I’ll be happy

Better than the arrogant and useless Gazidis. He is a true football man and hopefully would help to bring some top class players to the club

compromises we did during wengers tenure are hurting us. specifically ozils wages. keeping ozil was more of a priority to keep fans happy rather than in a sporting sense. im not telling ozil is a bad player but ideally i think the club would have preferred to keep sanchez over ozil. but sanchez leaving made keeping ozil a priority so that they dont loose two star player thr samr year. and so we gave him a salary to please him. and now both of them are underperforming and theres nothing to suggest that we want to keep ozil more than… Read more »

I haven’t noticed Ozil underperforming in the last few games

Oh yes please. The guy is a fucking force.

Can he bring Ronaldo?

Leno me, I’ll be your friend
Reply to  Donald's Trump

C’mon man, out of all the class players Juve have you’d honestly want a man who makes Alexis Sanchez seem like the ideal team player? No doubting his talent over the years but his type does more damage than good to a team like ours.

I think he’s going to be a bit preoccupied with playing defence stateside.

If we get him we have weakened both Juve and Milan this season.

Leno me, I’ll be your friend
Reply to  Christophe

Definitely. That and changing the canteen’s complimentary Chocolate Digestives to just standard Digestives are exactly where the money for a new CEO is coming from 😉

Check Wiki for an impressive CV. Helped to get smaller clubs promoted, then a bigger club (Sampdoria) into Champions League and a top club (Juve) to repeatedly win the League.
Top man.

Reminds me of our bid for Mbappe – a club record bid for a hot property. Let’s hope we are lucky with this one.

We should’ve bid for Lemar instead. We embarrassed ourselves with that one.

Is it me or does Marotta look likes a bit like Santi? It’s okay, i can take the downvotes

He’s a top class executive who has done fantastic things at Juventus. Just look at their trophies in recent years, he’d be a very welcome addition to our boardroom set up and he’s not completely bald like Ivan Gazidis. My father always told me ‘Never trust a fully bald man’ which I found to be a little harsh because as I’m sure many of you here are coming to realise hair is a transient thing. I used to have such long, lustrous locks that I was known around my local area as Tarzan, but over time it has thinned out… Read more »

Oh how I missed you ?

Where have you been Pete? Welcome back – you’ve been sorely missed around here!

maybe he goes to AC and they sack Gazidis

myrtle
Reply to  food for thought

then we can get him back just in time for Christmas

has he got one eye?

Did he play Hank Schrader the D.E.A. agent brother in-law of Walter White in Breaking Bad???

I’m not sure I believe this. I think our name being mentioned may be his agents doing. Because we’ve restructured and effectively split then CEO role into 2; for Raul and the other fella. A CEO now would seem quite redundant. No doubt it’s telling that’s neither Raul or Vik are directors, so there is still a change required at board level, but I think that will be a seperate matter. If I weren’t to guess, I wouldn’t be suspried if josh became an executive chairman to replace Sir Chips-a-Lot. But I don’t foresee any direct “CEO” replacement. In fact… Read more »

Give it to Wenger….

Anybody but josh please.

I thought Sanlehi was getting the bump up and Vinai Venkatasham is promoted to Managing Director.

Plus they are superceding Mslintat and looking at bringing in possibly Christian Pavon from Boca.

get us dybala or costa thanks

He’s been a flop at Chelsea. No thanks.

Bergkamp was a flop at Inter Milan when we signed him

Why hire out of the insular and behind-the-times Serie A which has done about the least among the top 4-5 European leagues in marketing overseas? Also, in light of today’s tweets by Juve, I’d like to know more about this guy’s role in Juve’s communications strategy regarding the Ronaldo rape story before we hire him.