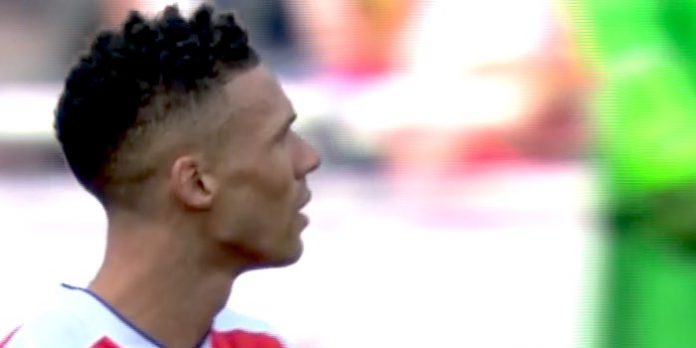 Kieran Gibbs is one of Arsenal’s longest serving players, making his debut in the league cup back in October 2007, but this season he has been very much a bit-part player.

He has, however, started the last three games, playing as left wing-back due to the fact Nacho Monreal has been pressed into action as a centre-half in a back three.

It’s a new system for the players, and while the 27 year old says there’s still a lot to do when it comes to adapting to it, he’s confident they can do it quickly.

“We still need a lot of work on this formation,” he said after the 2-0 win over Man Utd yesterday.

“We haven’t been doing it for long, but we can learn quickly, especially in games like today. We are picking it up quickly.

“I think the formation is good for the team. After a few defeats sometimes you need to change. It opens up new opportunities for me and I’m happy to have got a few games under my belt.

“That’s always when I feel at my best, when I get a few games. I feel much stronger now.”

It remains to be seen if he’ll keep his place when Mustafi is available and put into the back three, and his long-term future remains a doubt with the Gunners actively looking for a left-sided defender this summer, but he was solid against United yesterday.

How did Gibbs rate? Give him and the others a score on our player ratings system

He’ll often bomb it forward but because he can’t pass with his other foot he will stop, turn back and awkwardly pass backwards. Happened about 5 times yesterday.

I’ve got a lot of time for Gibbs. Never complained about lack of playing time, always performed well when called upon. Model professional.

He hasn’t complained because he is too comfortable and ain’t ambitious. A serious team would have sold him.

Don’t know why Gibbs is even in our squad, mediocre at best =/

Anyone else read this bitter and shitty article by Phil “Quazimodo” Neville on the BBC site?

Embarrassing how he and his brother carry on…

Gary Neville is decent and actually knows what he’s talking about. Phil Neville has a brilliant ability to speak so fast even his own brain (if he has one) can’t keep up. It’s the old speak first think later that “football experts” like Robbie Savage made a career out of. Just talk nonsense about character and desire and you’ve got yourself an audience. About this article, Mourinho’s comments and the general vibe coming out from united is absolutely pathetic. “How arsenal beat united but nobody cares”….oh please, Mourinho cares, Neville cares, united players care and united fans care, let’s not… Read more »

I think he is a bit rusty because of lack of playing time, he needs to impress very quickly before mustafi back to the starting 11.

How did Ox improve his crossing ability within a season? its right up there with some of the best crossers. Gibbs needs to improve his end product and with his attributes, i think he is best off crossing first time rather than try and dribble or get goals. If he did get start getting some assists, im sure that he will be offered a new contract as a squad player as he seems quite willing to play that part, whereas i would imagine a left sided version of bellerin would leave after two seasons behind nacho. The timing is right… Read more »

Ox always had quality crossing, even from his days at Southampton.
It was just an issue of low confidence.

His passing when he was placed in midfield has been top drawer as well. I never thought he had such a diverse range of passing.

I thought he did decent.

That said, I still think we should be considering Ox on the left as an inverted left wingback so we can balance out with Bellerin on the other flank.

Ox will have Monreal as left of the back 3 to back him up but will also free up Alexis further forward.