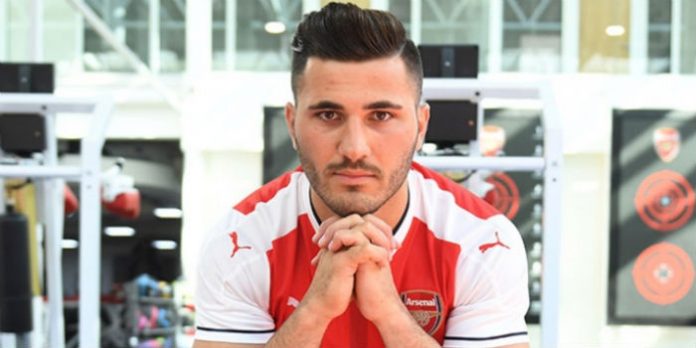 Arsenal have announced the signing of Sead Kolasinac on a free transfer.

The Bosnian defender was out of contract with Bundesliga side Schalke at the end of this season, and becomes the first capture of the summer. According to his former club, he has signed a five-year deal tying him to the Emirates until 2022.

The 23-year-old has been an impressive performer for the Bundesliga side and is a strong versatile player who can work across the left side of the back-line in a back three or back four.

Right, time for a quick quiz…

The following ? players have been signed by Arsène Wenger – can you spot them all? pic.twitter.com/ewEpmDRRs4

For more on the kind of player we’re getting, check out this profile piece by Bundesliga expert Lewis Ambrose.

Good stuff, looks like a beast. We need more of that in the team.

Laughing and smiling, nodding .. slowly backing out of the room

Is he related to Perez though, looks very similar.

Or is it Perez…

You have to be a genius I’m afraid.

What a Pedantic answer ?

Thats made me spill my tea !!!

I thought he looks more like Gundogen. Hopefully won’t have his injury problems 🙂

Which ti-set number do he given?

So Kolasinac is finally here!… might signal the end for Gibbs.

Still awaiting news about Ozil and Alexis…and Mbappe? One can only dream…

Seems it although the BBC website clearly has an agenda to undermine this great signimng by focusing on the fact that apparently he’s scored the fastest own goal in World Cup history. How pathetic of the BBC to focus on that – must be a Sp*rs reporter
http://www.bbc.co.uk/sport/football/40177129

and that BBC article follows another on Chiek Tiote’s ‘stunning volley against Arsenal’. Whislt I admit it was a brilliant goal in a bizarre game – surely they could have paid tribute to him without sticking the boot into Arsenal (again)

Team of the season player in the bundesliga for free, good bit of business. Gibbs will be off to whoever will take him which is a shame but he’s not up to scratch.

How come they let him leave for free ? Someone at Schalke must lose his job. A player good for Arsenal and not sold 15 millions in the summer or 10 millions in January.

See what I did there 🙂

Anyone know how good this guy really is?

He is amazing, was in TOTS bundesliga. Absolute beast of a player.

He’s been very effective going forward this season. Physically very strong, good crosser of the ball. Wing-back suits him a lot more than leftback I feel. Can be defensively suspect sometimes with regards to his positioning and the occasional rash tackle but did also play left centre back a couple of times and adjusted his game well when I watched him there. Think he will relish the premier league. Exciting signing and good competition for Monreal.

Could improve technically though. Monreal is far superior with regards to that

agreed. monreal is very underrated player technically . the way he keeps posession and links up with sanchez and other players is really good . kolanaisc is a different beast altogether , a battering ram that runs up and down the byline. thats not to say he is inferior , he’s just different . one writer compared him to luke shaw of united , and i think he got that about right. i only watched him in one game which was second leg semifinal against ajax and he was the best player on the pitch and he was only a… Read more »

He is Bosnian. He HAS to be ruthless. He looks the same build as Hulk.

Welcome to the Arsenal!

Look at the size of him. The Bosnian Beast!
https://www.youtube.com/watch?v=-N8pX_H32tA

As long as he’s not Andre Santos!

Does he ever smile? Not that I’m complaining.. he’s the anti-Santi. Strikes fear into the hearts of opponents

How do you pronounce it then? Kola-sin-ACK, or Kola-sin-ACH? Something else?

the Stig
Reply to  billybatts

a different George
Reply to  billybatts

I’ve never seen him play, so will reserve judgement until I have seen him play numerous times for Arsenal taking into account adjustment time, age, experience etc. Crazy I know, but I can’t help myself,.

Welcome to the greatest team the world has ever seen!

Just saw a 2016/17 skills /assists video of this guy. Now I am worried about his passing ability. Forget about Monreal, will he be better than Gibbs? Gibbs at least had good off-the ball movement :/

^Exactly. It was supposed to show/highlight his best qualities. If his best is average, then…

He’s rubbish on FIFA 17, more evidence that Wenger has lost it. WENGER OUT!

He looks like he stores the bodies of his enemies in the soil of his back garden.

He looks like he drinks coffee from the skulls of his defeated wingers.

He looks like he has no idea what the term “injury” means and thinks that it’s just some vague excuse for being a pussy.

But he’ll learn, by God will he learn.

Good start, now lets get that forward signed up.

Welcome to The Arsenal. This is business done way early 😀

I have never seen him play but he sounds quick,strong and he can play LWB or CB so sounds like a great free transfer. I just wonder who will play more games him on Monreal.

Looking forward to watching him next season.

Time to repeat the myth;
“I can’t believe we’re leaving transfers until this late in the window once again…. Really unprofessional”

I love Monreal, but he certainly isn’t getting any younger and this sounds like a great signing at minimal cost (wages, etc.) for a player about to enter his prime. We need to get younger, stronger and more athletic and this is a good start plus he brings that take no prisoners mentality that is often lacking in the team.

Hopefully we can get a good fee if we sell Gibbs that can go towards investments in other areas of the squad that need upgrading.

What an exceptionally dumb quiz.

A future leader for Arsenal perhaps?

From Eurpsport Germany’s Carsten Arndt: Arndt: “He was a very popular player with the Schalke fans because of his iron will and his passion. He ‘works’ at his football. Maybe he is too young to be a leader immediately but he definitely has the potential if he has settled in the team and the city.”

This website uses cookies to improve your experience while you navigate through the website. Out of these, the cookies that are categorized as necessary are stored on your browser as they are essential for the working of basic functionalities of the website. We also use third-party cookies that help us analyze and understand how you use this website. These cookies will be stored in your browser only with your consent. You also have the option to opt-out of these cookies. But opting out of some of these cookies may affect your browsing experience.
Necessary Always Enabled
Necessary cookies are absolutely essential for the website to function properly. These cookies ensure basic functionalities and security features of the website, anonymously.
Functional
Functional cookies help to perform certain functionalities like sharing the content of the website on social media platforms, collect feedbacks, and other third-party features.
Performance
Performance cookies are used to understand and analyze the key performance indexes of the website which helps in delivering a better user experience for the visitors.
Analytics
Analytical cookies are used to understand how visitors interact with the website. These cookies help provide information on metrics the number of visitors, bounce rate, traffic source, etc.
Advertisement
Advertisement cookies are used to provide visitors with relevant ads and marketing campaigns. These cookies track visitors across websites and collect information to provide customized ads.
Others
Other uncategorized cookies are those that are being analyzed and have not been classified into a category as yet.
SAVE & ACCEPT
wpDiscuz
64
0
Would love your thoughts, please comment.x
()
x
| Reply