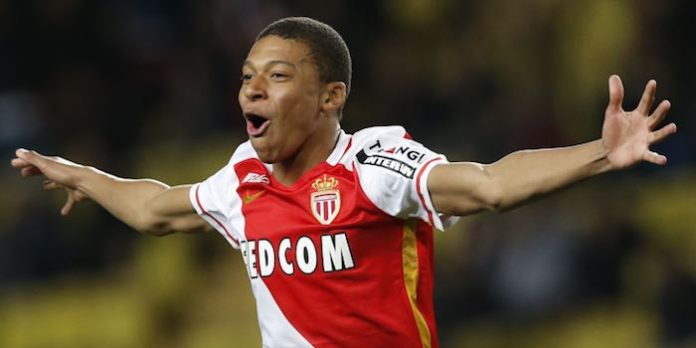 AS Monaco have released a statement warning sides from approaching Kylian Mbappe without their permission.

The newly-crowned Ligue 1 champions have so far rejected bids from a host of top European clubs, including Arsenal and Real Madrid, but are growing tired of their 18-year-old striker being tapped up illegally.

“To put an end to this unacceptable situation, AS Monaco consider asking the French Football League (Ligue de Football Professionnel) and the FIFA to commit disciplinary procedures against clubs offenders.”

Arsene Wenger is understood to have had a three hour face-to-face meeting with Mbappe earlier in the summer, however, it looks as though he had permission. Perhaps his historical links with the Stade Louis II outfit paid dividends on that occasion?

You’d think there’s not much you can do about illegal contact in this day and age. That said, earlier in the summer, Liverpool were forced into a grovelling apology when they were caught hitting on Southampton’s Virgil van Dyck. They subsequently gave up trying to sign the Dutchman.

Understand Monaco's complaint to FIFA over Mbappe relates to alleged conduct of Manchester City and PSG, not Arsenal. #SSN

As things stand it doesn’t look like Mbappe will be moving this summer, something Arsene Wenger touched on recently when asked if the Gunners were still pursuing the attacker.

“It looks like that [he will stay at Monaco], yeah,” said Wenger last week. “Too much choice maybe, so in the end people don’t move.”

Hopefully we are in the clear on this one though, maybe I’m wrong, but I have faith that Wenger and the club would go about business professionally. Wenger has been so public in his admiration of Mbappé and the meetings were well reported so it doesn’t look like there has been much attempt to hide anything by the club

Too Drunk To Be Offside
Reply to  Bertie Big Bollocks

So what is the rules on this. If Wenger or someone from the club went to a restaurant where Mbappe was having his lunch, then what are they to do. Run the fk away as fast as possible in case Mbappe wanted to come up and say hi.

Monaco should go fuck themselves. So signing players that are allegedly in a third party owner ship down the years like Falcao, Jao Moutinho and so many others is very ethical and in line with FIFA’s bs laws.

All clubs tap players up so Monaco shouldn’t be quick to ride their high horse.

It wasn’t us we don’t do that sort of thing move along nothing to see here..,?

Article 18.3 of the applicable FIFA regulation states: “A club intending to conclude a contract with a professional must inform the player’s current club in writing before entering into negotiations with him. A professional shall only be free to conclude a contract with another club if his contract with his present club has expired or is due to expire within six months. Any breach of this provision shall be subject to appropriate sanctions.” So, at least according to this regulation, you don’t need permission to negotiate with a player under contract, but you do need to inform his club in… Read more »

If his club don’t want to sell then both buying club and said player are SOL.

“It looks like that, yeah. Too much choice maybe, so in the end people don’t move” said Wenger thoughtfully, making a reflection about football equally pertinent to reflections on existentialism.

Wenger once tapped up Dick Van Dyke if that counts. However his previous escapades with Mary Poppins meant he got away with that too the dirty old dog.

This and the “reported” rejected bid for Mendy could mean a souring of the relationship between Man Shitty and Monaco. Which bodes well for our Lemar bid. I’m back on that transfer hype!

I fear Monaco might loose the whole team if clip keep hustling players off their camp.

Ha ha ha… Liverpool ‘hitting on’ van Dyk! I’m sure, Arsene, being the dignified gentleman that he is, sought permission first, before meeting Mbappe’s entourage. I do hope our name doesn’t pop up, given how much we hated on Chelsea and Mourinho about Cashley….

I knew Arsenal weren’t in trouble when I saw Monaco referring to “important” European clubs!

haha, stop that you!

Haha! I’m laughing and crying at the same time!

And that’s the truth hard to swallow.

how great would that be if man city ends up with transfer ban over this or the other case they are in front of the court of sporting arbitration over already.

Just curious but how does this work with employment laws? I’ve a contract with my job but there’s nothing sending a cv off to somewhere else or having a company contact me

I suppose it comes down to whats written in the contract perhaps?
When you sign a contract you accept the terms written there.

suppose that makes sense, but even if it’s in their contract if it’s against the law it’s voided. Guess I’m just wondering if this is something that could be challenged like the Bosman ruling

There is if you signed a non compete agreement. The player contracts are likely similarly structured.

I could be wrong, but in my understanding is that the point of this is, that it is not a law. It is a rule imposed by FIFA.

There’s nothing to say Mbappe couldn’t be employed by another club, but being employed by a club and playing for them are two different things – just look at Arda Turan at Barca.

A club can face sanctions in some way (player not eligible to play, fine, transfer ban, etc.) but that doesn’t mean the player can’t be in the employment of another organisation.

Well yeah that is usually what decides transfer business these days, the bigger offer doesn’t really come into it as much as it used to.

Copy pastes it into textEdit.

Kicks it in the stands.

Hopefully, we can rely on Arsène’s moral rectitude in this case. His refusal to take shortcuts can be irritating at times but this isn’t one of them!

BBC also saying city are the only English club accused. Would LOVE it if city get a transfer ban but realistically speaking I’m only expecting them to be given a small fine.

A small fine, hitting them where it really hurts!

Hope City and PSG get hit with transfer bans. That way Sanchez has nowhere to go!!!

I can see it now:

“Ok Citeh, before we hit you with a transfer ban, do you have anything to offer as evidence in defence?”

“Well, we can provide numerous examples of cases where our owners have caused large sums of cash to materialise in other bank accounts, apparently from nowhere. We could demonstrate this for you….”