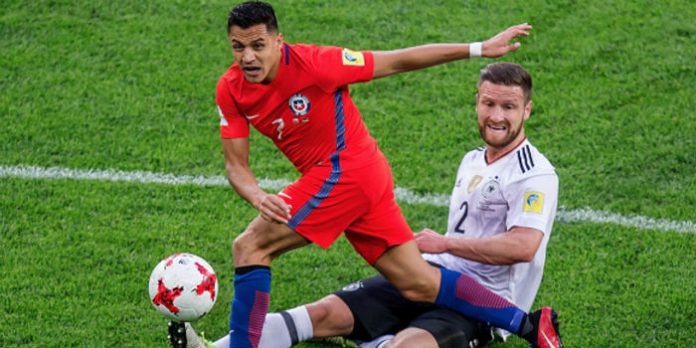 Arsene Wenger has confirmed that Alexis Sanchez and Shkodran Mustafi will return to first team training on Sunday.

The duo have been on holiday since Germany beat Chile in the final of the Confederations Cup in Russia on 2 July.

While the rest of the first team squad will be taking part in the Emirates Cup at the weekend, the striker and defender will begin their pre-season preparations with some vigorous star jumps, as prescribed by new fitness guru Darren Burgess.

“Alexis and Mustafi, their first training session will be on Sunday, the day we play against Sevilla [in the Emirates Cup],” Arsene Wenger told Arsenal Player. “They are practising on the day.”

Alexis and Mustafi will have only seven days to prepare themselves for the Community Shield game with Chelsea and a further five to be fit for the start of the Premier League season. Deciding whether to pick them so early in their preparation is something that the boss will mull over.

“First of all you make a really good check up of where they are, how much they have worked during their break,” he said.

“After, once you know where you stand, they need an adjusted programme and to see how quickly you can fit them in again.

“Of course it depends as well on what is the need in the squad, what is their quality. All of these things together make your decision. Do you put them on the bench when they are not ready [to start]? It is easier to put a striker on the bench than a defender, sometimes. Because in a short period they can make an impact. We’ll see.”

Finally, a story that mentions Alexis but doesn’t mention his contract situation. Real football is on the horizon!

NOOOOO! ITS ABOUT THE FOOTBALL NOW!

No, Alexis his focused on his training now!!!11

Well… Training and his lovely dogs.

D’oh! You mentioned it!

Is anyone else feeling inexplicably optimistic ahead of this season?

Trouble in paradise at Chelski.
United have acquired a billion pound rabble of mindless oafs.
Guardiola can’t manage outside a duopoly where he’s inherited one of the best squads in the world.
Spurs are going to find that moving stadium is A LOT harder than it looks.
Liverpool’s saving grace is off to the Nou Camp.

And we’ve bought sensibly and are holding our best player to contract for the first time since forever…. COYfuckinG.

Man City worry me the most, followed by Chelsea.
I’ve got a real itch for us to sign Seri for the middle of the park and Lamar to come in and transition for a year if we’re to lose Alexis on a free next season (hopefully he signs on)
I’m a bit anxious to see where we sit after all the contracts and outgoings are sorted, but to answer your question..cautiously optimistic atm.
Looking forward to the season. COYG!!

serri president just said two players will be sold . i hope we put the damn cash on the table and snap serri as soon as possible . he is a player in demand , if we dilly dally around this deal , we could loose a potential worldclass player .

Can’t deny his quality, but won’t he be off the the African Cup of Nations every January though?

Fortunately, the ACN has been restructured to now include more teams, but also to be played in June/July going forward.
Not that know the next thing about African football, but it seems like a good move to remove that cause of hesitation for European clubs in buying African players. And of course, good for clubs like the Arsenal to get some top talent!

It does seem to have been agreed by the associations but I can’t see when that will become effective from.
It may not be for another 4 years….
Anyone know for certain?

by that I mean Seri

Man U will be better than 6th, Chelsea will be worse with Morata instead of Costa, Sp*ds will struggle on a bigger pitch (no more home advantage), Liverpool will struggle with CL fixtures, and Citeh have spent a billion pounds on their D and they still won’t be able to defend.

Can’t say we’ll win the title, but we should be better than 5th.

its still early for a prediction , because unless transfer window closes we wont see how each squad shapes up . but in my opinion liverpool could be the team to beat this year , provided they get van djik . last year they had the best record against top six sides . their only problem was they couldnt break down teams who sit deep and they lacked a commanding defender . but they are smartly addressing those issues by buying a salah who could be the best piece of business of this year and van djik . city will… Read more »

Is this Gary Lineker?

Arsenal still have Wenger, so no hope pal

Ah that preseason optimism and naivety.

Artro is it? I’ll make sure I look out for you name after the first loss of the season and the inevitable Wenger Out Movement starts up again to see if you’re part of it.

But, in the end, you kind of did mention his contract situation.

The Friday start after the Community Shield is actually pretty stupid, if you want Arsenal to take the Chelsea match seriously, which I assume the FA does. (Wembley doesn’t pay for itself, you know. Oh, maybe Spurs pay for it.) Of course, the Premier League probably does not care, or else it would be called the English Supercup and played in alternate years in Shanghai and Los Angeles. Do you think the Friday start has something to do with TV money?

I’m sure the Friday start has *everything* to do with TV money. All the same, why they couldn’t have put another televised match on the Friday, and shown Arsenal v Leicester on a Saturday or Sunday TV slot, is beyond me. Then again, I guess that would be a bit too close to showing common sense.

bfollinprm
Reply to  A different George

Yeah, we will play the Boreham Wood squad in the community shield.

We have 7 central defenders on the books..

What am I looking at???!!! So now Puma has us playing in a white kit and a red kit AT THE SAME TIME??? What are we? Liverpool and Tottenham?!!! RAGE!!! Bring back the yelloooooooowwwwwwwwwwwwwwww

waiting to see Alexis first training of the season pic.

What an exciting news.Can’t wait for the season to start.

Dear Alexis, Welcome back. Will like you to know that we the fans loves you and will like you sign a new contact. Yes it’s out of our hand and in the event you don’t we will respect your decision and expect you to also honour your contact, be your usual self enjoy football like you always do. We will not like to see you train with the under 23 for a whole season. Remember football is your passion. Let make this season enjoyable with one another who knows you might even sign a new contact and end up to… Read more »

I doubt it…… he’s ‘sick’. I’m very disappointed if he’s really doing this, he get’s paid a wage most can only dream of and now he’s turning into Calos Tevez…. 🙁

Sick of Alexis being sick.

He is playing the game.

In turn Barca will then replace.

Liverpool will sell and buy.

Then Leicester will sell.

Madrid may feel compelled to buy too which will end the never ending story.

Can they match PSG for “ambition”?

Or maybe they will readjust sights and kick Bale out the door.

Everyone is waiting at the moment.

No he won’t.
Just sell the baby. Get £80M from those stinking oil rich northerners and USE the money well on a DM & CM.
oh & when he plays us at the emirates, make sure Holding kicks him up in the air and gives him the “your mental” eyes he gave Costa.