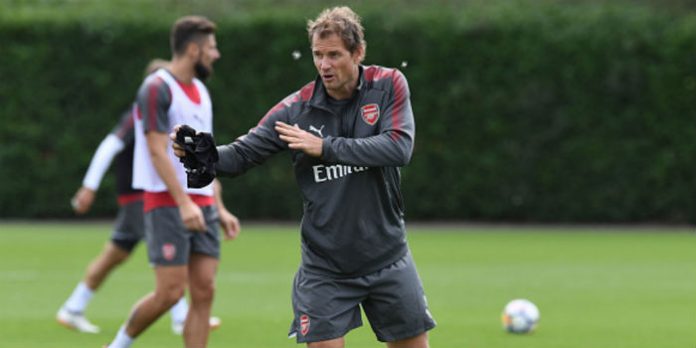 Petr Cech says he’s excited to have Jens Lehmann on his side having faced off against the German during his days at Chelsea.

The 47-year-old ‘Invincible’ was appointed to Arsene Wenger’s first team coaching staff in July and will help out Boro Primorac, Steve Bould and Gerry with both defensive and goalkeeper matters.

“It is kind of exciting for me,” Cech told Arsenal Player. “I used to play against him, now obviously he will be on my side.

“He’s with the team and sometimes with the goalkeepers as well, so that’s good and you can have the exchange of experience and the way you do things.

“I believe that with his experience and his career, he has a lot to offer. We had met a few times out of the pitch but mainly we knew each other by facing each other.

Arseblog News is pretty sure that Lehmann’s presence is already delivering results. The only explanation for us winning a penalty shootout with Petr Cech in goal (achieved without him having to make a save) is to assume Thibault Courtois and Alvaro Morata could feel the German’s steely Teutonic eyes on them…

As you’ve been good, here’s a few pics of Jens in his younger years…when he looked 7% less likely to batter you with a big stick.

Why didn’t we do this sooner?? Freddie and bobby with the midfielders, titi teaching welbz to shoot and keown and bouldie helping the lads at the back? That’s real Arsenal right there (and wet pants) I gotta go change, stupid day dreams ?

Too many cooks and all

‘you just have to want it more’ is the general advice many footballers will give to defensive and offensive players.

I want that coffee machine more…

Why there is more and more male getting excited such as wetting his pants when discussing about man & football? Has it become normal nowadays?

At what point did Mad Jens’s hair go curly and why did it happen – was he on HRT or summat?

Still waiting for Cech to save a penalty for us, Lol.

Delighted Jens in back in the set up. He won’t accept mediocrity.

I’ve not accepted my mediocre penis for quite some time now… I’m yet to see it grow. 🙁

He looks a bit like Bill Murray in the cover pic. Or is it just me?

good move to have MJ (mad jens) back at the club. now let’s bring dennis back.

Speaking of saving pens I feel it deep in my waters that we’ll get to a final this season and concede one deep into extra time and up will step the big Bohemian! The hour cometh! Of course, it’s probably going to be the Colombian in any cup finals but you get picture right?