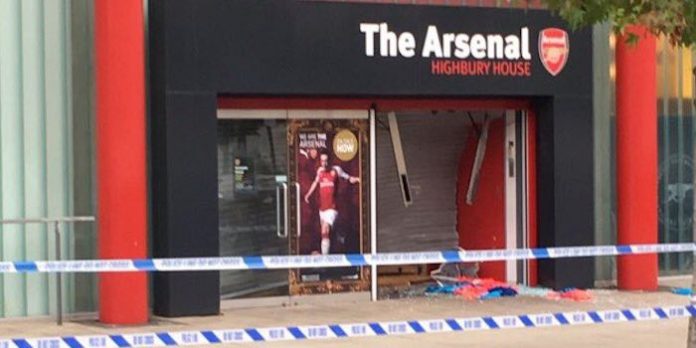 Arsenal were left relieved this morning after the club shop on Queensland road was the subject of a robbery last night.

It’s believed the criminals had planned to steal the Frenchman but had to make do with a range of merchandise instead.

The Metropolitan police released a statement this morning, saying, “Police in Islington were called to Emirates Stadium, Queensland Road at 23:27hrs on Tuesday, 29 August following reports of a burglary at a commercial premise

“Officers attended and found that the front of the Arsenal FC store had been broken into and a large quantity of merchandise had been stolen. The suspects made off in a car and two mopeds.”

Thankfully the former French international was not on the premises at the time, but the club must now count the cost of the good stolen.

The police have listed a manifest of the stolen items and have asked the public to keep an eye out, especially if they’re offered Arsenal gear by dodgy looking blokes who may or may not be on mopeds.

They ask that particular focus be on:

It’s also reported that the thieves made off with the entire supply of one vowel from the shirt printing section of the shop, and have warned people to be on the lookout for E dealers over the coming days.

Sagna turned down chance to train with Arsenal

Abc
Reply to  love and hate

Not a bad one but I have a question. Are we really going into the season with only bellerin as recognised right-back?
We know it is all a mess but still we don’t have any real cover in there apart from Debuchy.

Of course not we’ll sell him to Barca at the last moment!

Sead will play there too because he’s left footed…

Bellerin is a left back now. So I guess we’re going into the season with NO recognised right back!

Forgot Debuchy now.
Or has he been gone so long now that he’s considered positionless?

Hahahaha – they might have also stolen our ability to run a transfer club. Oh no wait, thats been missing for years now.

Transfer club soujds like the footballijg equivalent of family hampers ‘yaya sanogo nearly new condition, no warranty, only 55p per week for 40 weeks’

That couldn’t be verified. When contacted for comment the owner of the shop remained silent.

Apparently the shop manager has declared that he did not see it!

The Perez crack is unfair. (and the E joke is truly terrible!)
It’s hardly Perez’s fault that we overpaid for him in a trolley dash. Just sell him for whatever Depor will pay and get on with it. Why’s he being treated differently from Mustafi? And from Gibbs, who is going for £7m when English players are normally ridiculously overpriced?
Btw what has happened to Yaya Sanogo? I presume he earned so much in his petit adventure with us that he no longer has to ever consider driving a yellow van in France?

All this getting a bit too much for you blogs?

oh wow, Arsenal related humour,
the only Arsenal laughs of late, have been disbelief……..

people I know who support other clubs aren’t laughing at us any more. I see pity in their eyes. That’s way worse.

Seriously – i’m getting the same. They’ve quit giving me shit because it’s just too easy.

Yepyep, i get the same.
They’re even trying to help me figure out what the hell is wrong with the club.

Fml….this is what it has come too?

Jokes apart, let’s be honest. He’s always been reliable and IS better than Bellerin defensively, and is doing squat offesively lately.

If Arnautovic didn’t fuck him up, he’d still be in and around the first team. Always could be counted upon

am i the only one who thinks let him play in place of bellerin or ox on that wing??

Might have to let him play instead of Sanchez.

Not sure what he’d do on the wing. He has about the same pace as Per.
But he was reliable, yes.

Well, We wont be able to sign Johnny Evans afterall. Unless he dosent mind being Johnny Vans.

I guess L’Mar is out of the question then too.

Gotta get to some of them E dealers…

The sense of self-worth is inflatable

Apparently the thieves also took with them 6 tin-foil replicas of the Arsenal war-chest.

There goes our transfer budget. “Unfortunately our insurance claim for the club shop could not be settled in time for the end of the transfer window, so we needed to loan mustafi”

Apparently Debuchy available on free… How is he still at Arsenal? Good player, needs games but surely someone should snatch him up!!!

The suspect is hatless, I repeat; hatless.

Bravo! This is excellent

The article would appear to be incorrect.
The official police report says that, after checking the stock, the club found that they had more Sanogo shirts in stock than they had before the raid.

You couldn’t get me to buy a quarter price knocked off Arsenal shirt.
The last few I’ve bought have fallen apart in a matter of weeks.
Absolute pieces of crap.
I still have ones from the 90s that are fine.
It’s almost like they’re designed to break so you have to buy new ones

Bit like half the the player so we’ve signed

Sorry, at first I thought you were talking about shirts but I realise that it was players you were referring to.

Times like these make me content I am not a season ticket holder. Hilarious post.
What if the Arsenal shop had a model toy for sale , ”the football brain” with each player having their own? Size and shape may vary of course.
Theo’s would be An empty skull
Ozil’s left side would be abnormally bigger than the right.

Heck, we left him out front with 100 pounds in his hand holding a sign with the word Free written in several languages on it and still nothing. FML!!

I needed this. Thanks Arseblog.

Apparently the “suspects” are to be our saviour signings in the last few minutes of the transfer window and were breaking into the shop as part of their awareness training of how hard that is compared to breaking into our defence.

After Liverpool I really needed that. Thanks!

Was the Arsene Wenger book of Innovative Player position stolen too?

It was left back by de fence (sorry!)

A little ray of sun amidst the dark clouds this is

I’m certain Ivan will put this top of his priorities to justify his £3 million salary. Gazidis out.

Bet Daniel Levy is getting the hump. Has anyone ever bothered to burgle a Tottenham store?

Debuchy is the KING of deadwoods , there is absolutely no way to get rid of him !

You gotta respect the man , he has skills that other deadwoods should learn from.

Burglary is funny. Let’s hope it happens to you aswell

Of course you’re right and I’m sure no offence was intended. This is just gallows humour. Things are pretty crap right now so you take the lighthearted moments whenever you find them.

Without the letter E we become: Th Arsnal!!!

Arsenal. Weak in defence on and off the pitch

At least someone wants to wear the shirt

Tragically, all 100 autographed copies of “The Secrets of an Effective Starting 11” by Arsene Wenger were found untouched on the shelf.

It was Wenger somebody call the police and have him arrested because that’s the only way we’re going to get rid of him, false imprisonment like the Arsenal fan base have been when they watch our crap team play football.

You forgot the copies of ‘Joel Campbell – The Wilderness Years’

Heh heh. Thanks, Blogs. This bought a smile to my face in the midst of a pretty miserable week.

This website uses cookies to improve your experience while you navigate through the website. Out of these, the cookies that are categorized as necessary are stored on your browser as they are essential for the working of basic functionalities of the website. We also use third-party cookies that help us analyze and understand how you use this website. These cookies will be stored in your browser only with your consent. You also have the option to opt-out of these cookies. But opting out of some of these cookies may affect your browsing experience.
Necessary Always Enabled
Necessary cookies are absolutely essential for the website to function properly. These cookies ensure basic functionalities and security features of the website, anonymously.
Functional
Functional cookies help to perform certain functionalities like sharing the content of the website on social media platforms, collect feedbacks, and other third-party features.
Performance
Performance cookies are used to understand and analyze the key performance indexes of the website which helps in delivering a better user experience for the visitors.
Analytics
Analytical cookies are used to understand how visitors interact with the website. These cookies help provide information on metrics the number of visitors, bounce rate, traffic source, etc.
Advertisement
Advertisement cookies are used to provide visitors with relevant ads and marketing campaigns. These cookies track visitors across websites and collect information to provide customized ads.
Others
Other uncategorized cookies are those that are being analyzed and have not been classified into a category as yet.
SAVE & ACCEPT
wpDiscuz
66
0
Would love your thoughts, please comment.x
()
x
| Reply