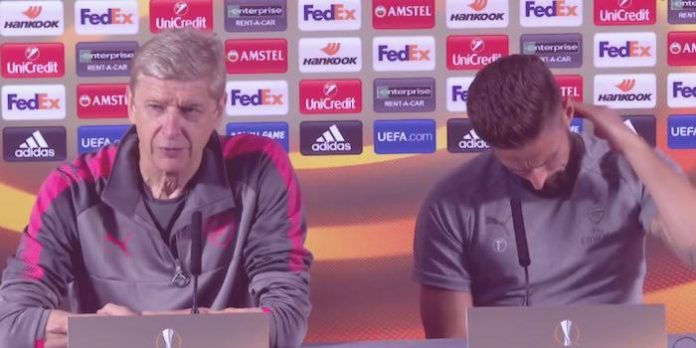 As reported earlier, some members of the first team squad sat out training altogether, an indication that they would not be involved, as the manager looks to rotate his squad with Chelsea on Sunday to take into consideration.

“On the injury front we have no big problem,” he said. “There are a few players have some response to playing two international games, like Ozil and Ramsey, who are rested completely.

“Overall the injury situation is not too bad. As I told you in the last press conference, Coquelin is out for three weeks.”

Although he wouldn’t be drawn on whether Jack Wilshere would be selected, the manager had some positive words for the midfielder who is contention to start for the first time since a 4-1 win over West Brom in 2015.

Asked what he needed to do, he said, “First of all to continue with the spirit with which he works. There was always huge pressure to come back as quickly as possible.

“Overall if he can keep calm, focus on his job, he’s on a good way for me. He’s doing well in training, getting stronger and stronger each day.

Emery: Fans will have respect for Jack Wilshere on his Arsenal return

If we are serious about the league this season, Wenger shouldn’t put any first team player in thie squad.

Fringe players and youth prospects fine, but there shouldn’t be any first team players there other than maybe Sanchez since he’s hardly played and could do with the minutes.

Agree that first team players shouldn’t make the journeys to Serbia or Belarus, But its not an easy group (harder than those of half the british teams in the non-champions league) so we do need to treat opponents with respect.

@Jean Ralphio I’m sorry mate but the fact we are even in this competition is a joke. We cannot waste first team players on this competition if we want to have any sort of decent league campaign. And the only case there is to play anyone from the first team it would be Sanchez, because so far he has hardly featured and 100% needs the minutes. But the way things are going our club cannot risk making it two seasons in a row missing out of the Champions League football. We need to take the league seriously this season. Not… Read more »

lol…bit tender today IamaGoober? I pretty sure he was replying to the:
“SHERE WILL POWER!”
comment

I am always tender.

How about we use this competition to learn to actually win a knock-out round? It’s this egotistical attitude that “we’re too good to be here” that cost us against Monaco a few years back. It’s time we learned to be disciplined and focused.

Or we could try to win the competitions we’re playing in. I find your mentality craven and lamentable.

i would take Walcott off and play Nelson instead.

I want Nelson to play too, but Theo delivers goals each season and we shouldn’t write that off since we’re paying him a not insignificant amount. Let’s at least see how hungry he is for playing time and if he and Oli can rekindle the chemistry they had a couple seasons ago before Theo blew his knee out. If a few matches go by and he’s not, it’s Nelson’s turn and until then Reiss can sub on if Theo is flat. What the manager does here will likely speak volumes about Theo’s short term future in the next couple of… Read more »

To start off with, the best option with Nelson (and Willock) is to have them on the bench and ‘blood’ them in to games we’ve already won.
Then to introduce them as starters later on when they’ve that little bit more experience in front of a bit crowd.

A good chance to play some of our more junior players and those returning from injury, away from Europe’s top, top table, where the likes of FC Qarabag run rampant.

It’s embarrassing that we have to play teams like 1. FC Köln, established teams from major European leagues whereas Chelsea’s players are tested by the leading lights of the Azerbaijan Premier League

Well, in all honesty, there is no difference between that game and our cataclysmic collapse against Bayern last season.

Shhh…some people prefer this to qualifying for CL.

Betting on Wilshere coming up with an absolutely..’Fuck u bitches’ Performance

what odds are you getting on that?

I’d have had a piece of that, but cant find it on William Hill.

Giroud looks uncomfortable; I wonder what the question was about at that point.

The size of his balls

The arsenaut
Reply to  arseblog

And? What did he say?

Asking for a friend.

or so I heard.

Good point and good perspective. Xhaka has several years to continue to hone the craft, especially in his position and playing style. He’s still just a pup for that kind of midfield distributor role.

Wenger and Kroenke are now harvesting the fruits of transfer window profits after always refusing to spend on formidable world class players for fear of their high wage demand.

Sounds like he intends to play Wilshere, excellent. That’s another body for midfield at least. Hopefully he can make it to the first team. Fingers crossed.

I was at the game for Jack’s last start for us against West Brom, glorious left foot goal from the edge of the box to go along with Theo’s hattrick.

If I remember correctly Arsenal fans on Twitter managed to get that as Goal of the Month on MOTD with our superior social media presence.

Four social media presence… something to feel proud of at last!

I have a feeling that we might see a return to 4-2-3-1 for the Europa League. I reckon that would be the best way to get the youth prospects involved

And the best way as far as resting players. We don’t have depth at RWB, but in a pinch, we can play Debuchy or Chambers at RB.

AM-N can play RWB. He was a winger that’s moved back to RB/DM/CM.

Carzola will probably play before Wiltshire.

Please tell me that the misspellings are on purpose.
I mean, it’s not like these are a couple squad blokes we just picked up.

Who is Carzola and who will he play for?

A bloke on my sunday league team showed up to a match this season wearing an arsenal shirt with “Carzola” on the back…was promptly asked who the fuck is Carzola, at which point it dawned on him that he had purchased a shirt with a typo on it. Best part of the story is that the shirt was a replica of the 2012-13 Nike away kit, meaning it’s taken him 4+ years to realize this.

The deciding factor on selection for me is the fact this competition has way to many games. A mixture of real potential and players who need this for form reasons only methinks. Really hope to see Reiss Nelson though. He looks like a player who could really kick on.

I would like to see Iwobi, Wilshire start along with one or two young (AMN, RN) guys. I would also really like to see Holding and Chambers start as CBs in a back 4 but highly doubt that will happen today (I bet we see Mustafi and/or Mert back there for experience).

Reiss for either Alexis or Kolasinac

I like this team everyone a hundred percenter, full of talent and commitment.