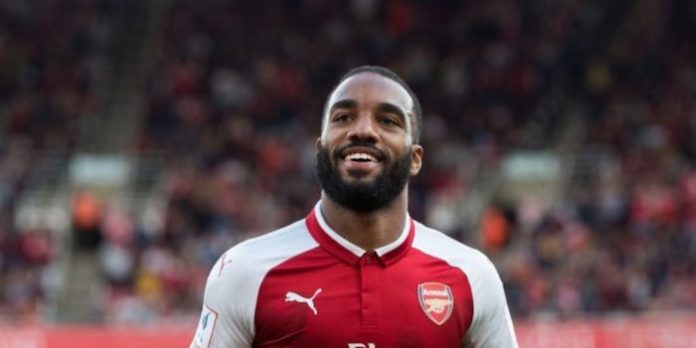 Paris Saint German may have spent more money this summer than Amazon have saved in tax but they still couldn’t persuade Alexandre Lacazette to join them.

The France international held talks with the Parc des Princes outfit after his move to Atletico Madrid fell through, however, despite the riches on offer from the Qatari-backed project the striker decided his future lay away from his homeland.

“We talked to PSG but I knew it was not where I wanted to go. In France, I would only play for Lyon,” Lacazette told RMC Sport while on Interlull duty.

“PSG could have helped me progress because they of the big players they have but I wanted to play in another league.”

Lacazette again touched on his eagerness to get to grips with the physicality of life in England claiming he needs to be ‘stouter’ in front of goal. Honestly, that could well be an off-kilter translation by Football 365, but f*ck it…it sounds funny.

“In the Emirates, I have been efficient. Now I have to keep going and have the same stats away from home,” he added.

“I still have to work on some points, even if it’s going well. I can still develop my relationships with my midfielders and defenders.

“I also want to become stouter in front of goal because in England the referee does not whistle.”

Not sure “I’m Laca teapot, short and stout” is going to catch on as a chant, but it’s worth a go.

This makes me very happy.

Yes indeed. Let’s not forget he’s the future of this Arsenal club! And we’re happy/lucky to have him.

Troopz? Is that you?!

Funny how a AFTV related comment is met with only up votes so far, when every one here’s always slaggin them off ?…

I like what they do myself, wouldn’t do the blog any harm to maybe team up with Robbie for a podcast or something, considering they do have over half a million followers. Getting just 5-10% hooked to Arseblog like we are, is good for busin£$$.

I prefer the quality content over business. We’re the arseblogs not the Kroenkes.

Oh ok my man I’m sorry. It’s a different medium with I’m sure more then enough potential readers/subscribers who don’t come here yet. But I guess all their +500k must be thick morons anyway right? I can recall Blogs arguing why he needed ads, how the site has grew, columnists needs to be paid, site to be maintained, podcasts etc etc. I have no degree, but sounds like kind of business to me and business need money. Customers mean money, more money means more quality. Seeing that’s what you (and I) prefer. But then again I’m just a stoner, and… Read more »

Troops is an apocalypse level moron with the vocabulary of an upturned calculator.

Am I missing the point here? That is clearly a reference to Troopz…gets upvoted, I mention I like what they do and they’re always being slagged of here, gets down voted. That comment should by default be down voted, knowing the feeling towards AFTV on this sites comment sections. Like it wouldn’t surprise me if you upvoted and after that you commented this. I just find it hipocryte sorry. And just cuz the guy maybe don’t speak, look, act like you, doesn’t mean he is a fraud or his message has no truth in it. He does him, while you… Read more »

Blogs had Robbie on the arsecast a while back, when AFTV was just starting up

Nice! I’ve only been coming here for about 5-6 years so I would def have missed that 😉 I like the guy and what he does, like seeing people doing well regardless.
But don’t you dare pull such a stunt out again!! Pitchforks and petrolbombs will be out! Plus you wouldn’t wanna bring in any of their thick subscribers, they might just subscribe to the blog! And we all know that’s bad for business!
Anyway that’s what I hear, I have no degree in business.

Because you’ve never seen an ironic thumbs up on arseblog before?

Hopefully we get a top creative player to play alongside him once Ozil and Sanchez leave. And NO.Ramsey isn’t the next no.10
Draxler and Lemar are obvious candidates.But unless Draxler is out of the starting XI,I don’t see him wanting a move elsewhere,much less,Arsenal.
In my opinion, we should look at players, who play for teams below our level, or players who are frozen out of teams above or equal to our level.

What makes you think Drax is creative force? Unless Lemar goes on a huge discount there is no way of getting him next summer. The way the market is going I would think 120-150M?

Draxler plays as a creative midfielder for Germany. Plus he is widely considered to be Ozil’s successor in their national team. If Lemar agitates for a move, thats our only solution.But still very difficult to see anything less than 100M. And knowing Arsene, he is not gonna want to spend 100M on a single player (atleast not now).

Who comes in is dependant on Arsenals place in Europe next season. Champions league football is so important to getting the bigger names. Regardless of the occasional ones who sign with clubs who arent in the champs league, most will not even give Arsenal a sniff if they are Europa bound again.

Fingers crossed we get Lemar as a further boost to our return to the CL next season.

Would’ve been difficult to start at Psg. Good thing he moved here.

You were not one of those telling us no one was in for him that’s why we could sign him. We’re you Trez. Get honest. Also I think he more clinical than Cavani and with Neymar and Mbappe either side he could have scored a shed load.

I don’t think it could have been serious interest? I don’t see the way AL plays that he would be able to lead the line at PSG. The way Emery likes to press.

I thought Emery likes to high press similar to the Spurs?

Lacazette would’ve been back up to Cavani. No sane person would even think of saying he’d start at PSG. Typical “positive fans” not being logical as usual.

Bring proof or be quiet. Lacazette would not start over Cavani. Cavani off the ball movement is probably the best around…he’ll get into better scoring positions than Lacazette.
You still think Lacazette will score more than Lukaku?

Er, it’s quite a hard one to prove Trez, as it’s not actually happened. We do know however that our man scored 37 goals in same league last season. In team that were not as strong.

So glad I got him on the back of my shirt this year. Everything about him both on and off the pitch has been tops. Once the relationship with the midfielders starts to strengthen, as he mentions, and they start picking him out for those runs in behind that they’re currently missing, we should see even better results. I really love this guy so far.

I think Ozil is the man to find those runs. If he can get himself sorted and get back to playing.

He had the opportunity to be one of the great players for the club. He’s so far, very consistent. Which will bode well as he grows with the team.

Seems to have a good attitude. Would love to see him start alongside Giroud in a front two.

Ritchie Powling was stout in front of goal…

We did he hold talks with PSG if he, apparently, didn’t see himself playing for another French club? Bit of a pointless statement really. I’m glad he’s at Arsenal though, he appears to have a great attitude. Hopefully he proves to be more Henryesque than Gervinhoesque…

Hey blogs.. why no blog on the cesc admitting pizzagate yet..

Because it happened 12 years ago and everyone has known for years that he threw it.

So, if Lacazette had gone to PSG, then Mbappe would’ve stayed at Monaco, then Lemar would have gone to Arsenal…
I kid I kid! Just pulling some legs 😀

And we still wouldn’t have a striker..

I kind of get where he was coming from with “stout”. I think he meant to say something like “stronger” or “braver” in front of goal.

Either that or I’m chatting rubbish, and talksport are too. It’s probably the latter…

We need a song for him, however nacho is my man. What a gunner. Nacho a arsenal legend come from me who is a striker

Does the chant finish ‘tip me over, and goals poor out’

Cesc confirms he ‘delivered’ the pizza to the Red nose!

The french word he used in the interview was ‘costaud’, which is better translated as sturdy or strong, in place of ‘stout’

…and is very nice with apple pie.

Guinness is Stout so that is good?
Arshavin was Stout, like a hobbit, maybe not so good

The stoutest of them all. I love Guinness!

Stouter in front of goal?
So, like a sort of French Grant Holt then?

I’d rather get Pastore than Cavanni.

Pastore can replace Ozil but also be re-roled like santi or alexis possibly for a deeper role where his ball control and deep passing may help.

Cavanni is getting on at 30yrs.

But Draxler would be fantastic.

Of course Laca is having a chat with his good mate Greizzman.

I’m noticing a trend here. Why do all these players think it’s necessary to share this information.

Usually, it’s the ones who speak like this that end up leaving in a hurry