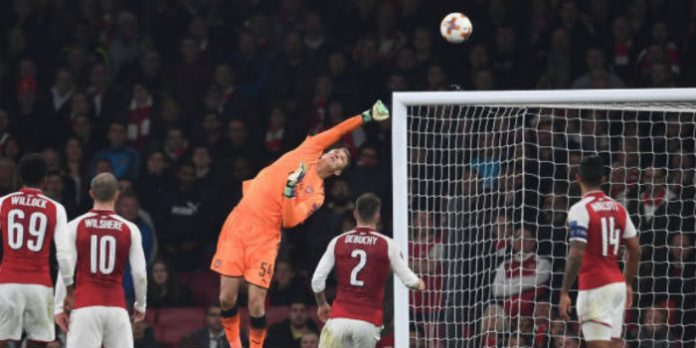 No matter what happens in Matt Macey’s career from this point, he’ll always be able to say he kept a clean sheet in for Arsenal in Europe. That’s pretty great if you ask us, even if the 0-0 draw with Red Star Belgrade wasn’t the greatest spectacle.

The 6ft 7inch keeper, who made his competitive first team debut against Norwich last Tuesday, proved his quality with a brilliant fingertip save to nudge a header onto the post in the first half and kept his cool after the break despite being left exposed on a couple of occasions by errant play in front of him.

Deputising for the rested Petr Cech and injured David Ospina, Macey reflected that he enjoyed his first European experience.

“Obviously that’s the aim for all the young lads here in the academy,” he told Arsenal.com.

“That’s the dream when you join Arsenal as a kid, to go on and be a regular and it’s just part of the stepping stones, but there’s a lot more hard work and I’ve got a lot more to do to make the next step.

“It was obviously a big occasion for me. To play in Europe is a big step in my career, but the boys made it easy in front of me, they defended well and it was good test because they’re a good side, but it’s about building on that now.”

The 23-year-old’s performance was a positive for Arsene Wenger on a drab night at the Emirates.

“I think he took his chance very well,” noted the boss. “He is huge, he is quick and you do not often find combinations of that size and that speed, he is very agile as well for a guy who is tall like that.
“He came late to us considering normally goalkeepers come at the age of 16, he came at 20, but he is intelligent and very focused.
“That’s why I was pleased to give him a chance tonight and I think he took it already against Norwich and as well tonight he played very well.”

He was appalling except that one save.

I’m not sure how a clean sheet can be called appalling? He made a few errors that you might expect from a young player but made a great save and kept a clean sheet,

These young players will improve vastly from these games and we have qualified, it should be seen as a nice change and a positive for the future.
appalling feels a bit harsh!

A clean sheet was purely because of luck, they just fucked up some golden opportunities.

So how exactly was he appalling then? I’d love for you to elaborate a little.

But you can’t bkame Macey for that. One bit of early uncertainty otherwise he fills me with more than Osoina

I thought he did fine. Had that poor clearance in the opening moments of the game, but that was probably down to nerves, other then that I thought his performance was completely fine for a young keeper making his European debut. As a whole I thought the senior guys let the young guys down last night. we had seasoned Premier League players out there of should be easily two or three levels above Red Star, so they’re none performances were what was most disappointing about last night. Elneny I thought did okay at CB he’s still learning that position, so… Read more »

You can’t tell me you think you’d do better? He kept a clean sheet, I’m not sure what else a keeper is supposed to do. We should support our young players.

I support them, get very angry when they are not given more opportunities. Can not say Macey had a good game yesterday just because we kept a clean sheet.
Did we play well in the 2005 cup final? No. It is like saying yesterday was a great game, we didn’t lose and qualified.

You noticed that he is a keeper right?

Wow. I think you should always read your comments before posting them. It probably sounded logical in your head while typing.

That’s stupid even for the internet..

He made the save when it mattered , gained experience and I have more faith in him than some senior goalies we have had of late. Macey is our Nr2 now as far as I’m concerned. I can take rookie mistakes from kids . I’m less forgiving when the same mistake is made by a “non-rookie”

Yes I made a mistake, still a shame he is presently not with us.

Arguably selling Szczesny is the biggest mistake Aw has made and sold him for a song. Instead we are left with hapless error prone Ospina. Just hope Macey and Martinez can step up quickly

He only joined us recently, give him time, he’ll be coached to make the same mistakes as our senior goalies 🙂

I do agree though that he feels more No.2 than Ospina, who seems to like standing inside the goal!!

After losing Szczesny, I am pleased to see there is someone else in line with good height and agility. Hard to know how good he might be without more first team action though.

It’s a massive boost to see young players taking responsibility but the positions-shuffling is not helping.

Good keeper and 2 good performances. Hope he makes it in the long run!