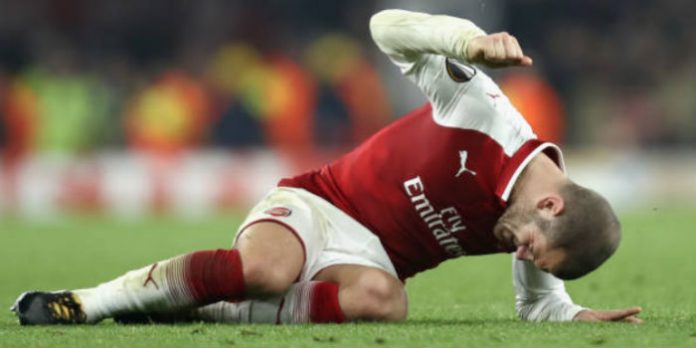 Jack Wilshere says he’s pleased Arsenal have qualified from their Europa League group with two games to spare but accepts the Gunners’ performance against Red Star Belgrade was below par.

The England international cut a frustrated figure all night as Arsene Wenger’s mix-and-match starting XI laboured to a drab 0-0 draw at the Emirates.

“It’s nice to go through, that was the plan before we started this group,” Wilshere told Arsenal.com after the game.

“We knew we had the quality to get out of it and we wanted to do it as soon as possible. Of course we wanted to win the game tonight, but as they say, if you can’t win it, don’t lose it, so we’re not delighted, but we will take it.

“We had to wake up in the second half, and I thought we got better. We weren’t as good as we have been in recent performances. I know we’ve qualified but we still want to do it properly and win the group.”

Wilshere had Arsenal’s best chance to score on the evening, however, despite beating Red Star keeper Borjan with a deft chip in the second half, his effort didn’t have enough on it to beat a defender on the line.

In retrospect, the 25-year-old might have left the shooting opportunity to teammate Ainsley Maitland-Niles who looked ready to put his foot through the ball.

“I thought that was in. Ainsley probably won’t be happy with me as I took it off him, but I thought I could score. On another day it could have gone in, but it was great defending.”

Having garnered headlines and plaudits for recent performances, there were growing calls for Wilshere to be selected by England. Alas, when Gareth Southgate announced his squad for the upcoming Interlull prior to this evening’s kick-off, the Arsenal man was not on the list.

Arsene Wenger, who backed Jack returning to the England fold, said after the game that he still thinks it could happen in time for the World Cup.

“He needs these kinds of games to come back to his best level and what Jack needs is to be injury free for a long period until the end of the season and get games like that,” said Wenger.

“Then I don’t believe he could have been involved [for England], he’s not, so maybe if he keeps fitness he will be next time.”

I thought Jack played pretty well last night, but he’s still not quite there. Obviously with a 2nd string around him it will be harder, but if he’s going to back at his best he needs to take more control of these games and lead from the front. He’ll be disappointed that he hasn’t got in the England squad, but it means more rest for him to be the beast we know he can be for us.

How he didn’t make it into the England squad I don’t know. Southgate picked Ox and Winks last time round based on what?

Start playing Jack in the premiership then if you think he is ready for England. Give him a new contract while you are at it, he is more likely to sign it than Ozil.

Jack wasn’t at his best but still our best player last night. I haven’t one remotely useless fame from him this season.

I think Wenger played it smart by indirectly telling Southgate how to do his job. Ofcourse, Southgate wouldn’t pick Jack when someone comes out and says Wilshere is entitled a place in the national team. His ego wouldn’t just let him pick Jack. Thankfully, for us jack will not be playing in pointless friendlies and he will hopefully be fit and raring to go when we play Sp*urs.

Wilshere took the ball from AMN in order to chip the GK and lost it. AMN made a good efford to take the ball into the box and he could blasted it home with his right foot on the near post. On another day maybe Jack should have left it

AMN getting more and more involved in these games which is good to see but he must be clucking for an opportunity to play more centrally (or even as a RWB). Saying all that, learning to be effective on your weaker side is never a bad thing.