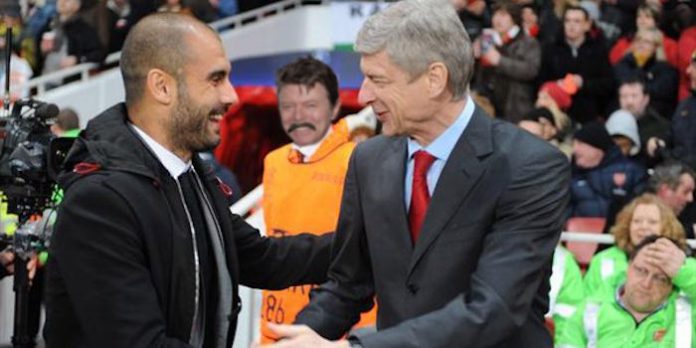 Although a defensive approach worked well when Arsenal faced Chelsea away from home at Stamford Bridge earlier this season, Arsene Wenger says his team can’t just go to Man City and try to shut up shop.

The league leaders have been the most effective attacking team this season, while the Gunners have found clean sheets difficult to come by at times.

However, without going into too much detail about his game-plan, the manager says he wants his team to try and make life difficult for a City defence that conceded twice to West Brom last weekend and twice in midweek to Napoli.

“I wouldn’t like to come out on it. but of course we will try to play our game,” said Wenger.

“We will not hide. When we go there, we want to defend well but you cannot go there and only be focused on just defending.

“We want as well to play, have the ball and create dangerous situations. The best way to defend sometimes is to attack.

“After, you have to rate the risk. Is it a bigger risk only to defend than to attack if a team is very strong in attack?

“Maybe it is a bigger risk only to defend.”

Finding that balance will be tough, for certain, and there is a need to be cautious against a team as potent as City, but it’s probably true to say that if we just sit back we’re inviting the kind of pressure that they can exploit.

Team selection may well be a factor too. Will it be Ozil away, or someone more defensively switched on? We’ll see.

With worse squads, we’ve beaten Guardiola’s Barca 2-1 and Guardiola’s Bayern 2-0, both better teams than the current City. Mind you those results were at home, so I wouldn’t mind a draw at the Ethiad.

I would argue our squad at the momemt is worse. It might so be that our attack is stronger, but to beat city you need to beat them in midfield. Personally i think Xhaka and Ramsey is a worse midfield than what we had on both of those occassions.

We beat them a couple years ago by getting coquelin to stand near silva a lot. Take him out and they are a top 4 side.

It’s not just Silva though. I would argue that Debruyne is their brain. Also we know how good their wide players like Sand are in getting behind our defense.
Sead and Hector need to be fully switched-on!

Sometimes I worry for Arsenal fans; the ones that seemingly overestimate the team whilst underestimating clearly better opponents with such ease.

City without Silva are a top 4 side? lolwut??

In his defense I think you’ll find that first is also part of the top 4! ?

The squad is stronger, but there’s certainly a case for the thought that the 1st team 11 isn’t.

A different George
Reply to  Alexstratz

The truth is, Man City is not very good at defending either. Without Kompany, they have Stones and Otamendi in the back, and depend entirely on Fernandinho to protect them, often by early, not too aggressive fouls. Get a yellow on him early, press the back two, and there will be a lot of goals at both ends.

Fabregas at that time alone makes that team better than this one. Also that team were coached to play Wengerball. I’m not sure Xhaka and Ramsey would get the ball back from Fabregas and Wilshere. Just reminiscing on a team with a few snakes but better ballers…

Well this is the way I am looking at this weekends monster fixture against City, and my thought process has helped rid me of the anxiety, so here it is, it might help everyone else; Ultimately if anyone in that Arsenal dressing is genuinely serious about winning the league this season, then they have to go to City on Sunday and want to do something. Whether that something is fighting tooth and nail for the point; or whether its actually having the stones to get the ball down and play the sublime football we all know they are capable of,… Read more »

I knew Stan Kroenke attended matches, he just comes as a steward so people do not realise

To be fair, we can’t defend anywhere…

Well, they might not be that good when it comes to “pure defending,” but when it comes to City, the best way to defend is really to attack. They conceded 6 goals in the league so far, which is second best after United (4).

Yes their attack is so strong that it hides the lack of quality in their defence, but it doesn’t mean it’s not there.

I read this first as “We just can’t defend at Man City” and thought, giving up already Arsene?

It’s called counter-attacking Arsene. Give it a try mate! Defend then hit them hard and fast on the break. If we try and control possession and tempo it will be 4-0 to city.

Seriously heard this statement so many times and we go and try and control the flow of the game and possession away from home and get rolled. We have to defend and defend resolutely and disciplined. They break hard and fast. That is the strength of our team. Lets bloody well use it!

Perfectly agree. We simply are not good enough for traditional wengerball – “attack is the best defence”. I would have played 4-4-2 with Lacazette and Walcott up front.

One game where Cech can make all the difference.

If we play like we did against them in last fa cup, we just might nick away invincibles returns title from them.

(Half-time predictions are evil though!)

Id bring Martin ONeill in to assist for this one mate

Aladdin Sane was an excellent steward it has to be said

Heh, beat me to it. Nice photoshopping, that.

I read it as “Wenger: We just can’t defend”

or even worse: we just can’t

That means we dont have a squad that can compete. Which is very annoying considering Wenger refused to properly bolster our squad in the transfer window.

Özil, Özil, Özil, yeah, he is part of our 3 strikers with SEVEN guys behind him supposed to defend! I’d rather like Ramsey to not spend his time in front of Lacazette as for Stoke’s goal when Özil was the only one to track back.

It’s very interesting Alex, last year at city Ozil got slated yet he had highest by far pass rate than any one else in our team, we ended up backs to the wall and continually lost possession. Ozil was only one who seemed capable of keeping the ball but had no one near him or capable. Everyone blamed him and blogs slips his name in once more to continue false narrative. Ozil ain’t the problem.

I didn’t know David Bowie was a part-time steward!?!

2 years ago (if I am not wrong) he said the same thing and we went to City and won it. But we had Cazorla and Giroud was in fine form. So it depends which Arsenal will turn up. COYG!

I belive that was three years ago

Our team is rested. We must start full throttle.

Yeah well, be naive and go there and think we will knock it around and beat them on the offensive and we will get a 3-0 thumping. Every time we’ve gone to a top team and Sat deep, defended well and hit on the counter weve got results. Even when we did it at home against those teams, got results.
Sit there and think we are better team than them and try to out play them, we loose 8/10 times. We are simply aren’t better. But that’s not saying we can’t get a result.

This kind of statement has been made 100 time by wenger then we go and try to out play them and get smoked, frazzled by turnovers and obliterated on the break. That is what we need to do away from home. Wait, be patient and defend AS A TEAM, then break. This is a huge test of where we are at and this kind of statement makes me think Wenger hasn’t learned his lessons…scared

I think we should play Ramsey in midfield rather than as a third number ten. When he partnered Arteta in there at the back end of the season prior to his break out I swear he was making more tackles than any other player in the league.

is that a sly picture of David Bowie snuck in between them?

I think Iwobi will start, only cos he didnt play any part in yesterdays game

I would absolutely take a draw against ManCity — but with current central midfield options and lack of positional discipline (Ramsey), I don’t see it. I just hope that we aren’t trounced.

We cant even defend against swansea and watford of course we cant just defend at man city.

Chamakh my pitch up
Reply to  A Person

You have sad dreams my friend

I just hope we don’t get battered. Also KDB is the first player in years outside of AFC that I’ve really admired. The guy is a true genius. Unbelievable to watch, but with that said let’s hope he strains a hammy in the 3rd minute

How about just hoping that he has an uneventful, off day? Don’t like wishing injuries on others, even on the players who are the worst cretins (De Bruyne happens to be one of the good guys – he just happens to be our opposition)

I saw Napoli go to the Etihad and cause them serious problems at the back. They pressed and hassled Otamendi and Stones. I know they lost 2-1 but it was a cracking match

Crickey! I’m getting very worried with this talk…?

We can beat this City. Hold them for 60 minutes by playing tight. Then start hitting them. Guardiola teams are not patient when it is not working

Yeah, defend…and counter. Hopefully that is what Arsene means by can’t JUST defend (the just being counter attacking). If it means try to control the game we get torched 4-0. If we defend as a team and its a full concerted defensive effort with fast breaks lead by Ozil we have the ability to knick something

We could be heroes! just for one day….