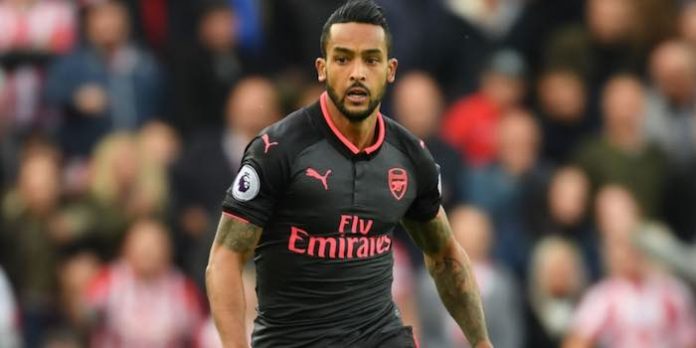 Theo Walcott’s absence from training today suggests that the 28 year old will not be part of the Arsenal squad for tomorrow night’s Europa League tie with Cologne.

The England international was not involved in Saturday’s delicious 2-0 win over Sp*rs in the Premier League, missing out through illness, and it appears he hasn’t recovered in time to be involved in this game.

Danny Welbeck could be the man to replace him in the front three, giving him some vital minutes. He hasn’t played for over a month, when he picked up a muscle strain in the 2-1 defeat to Watford at Vicarage Road.

Arsene Wenger is expect to heavily rotate his squad again, in particular at the back where both Rob Holding and Calum Chambers are in contention again after injury.

Youngsters like Reiss Nelson, Ainsley Maitland-Niles, Eddie Nketiah and Joe Willock should all be part of the group travelling to Germany today.

What amazes me more is it’s taken till he was 28 for Wenger to realise he’s perhaps not going to be the worldie Arsene assumed he would grow into.

Looking forward to 2027 when we are still discussing what position Reiss Nelson is most suited to.

2027 when Arsene is still dithering where to play him…

Wenger is too accommodating.

I think we should be blooding the younger players now.

Maybe He gets a run out for the shop window. He’s still effective depending how he use him but if prefer a bit of invention and more nuance where Theo tends to be a more direct player who tends to telegraph his moves.

I think that ironically it was his injuries that have kept his Arsenal career going for this long. His poor performances, and mediocre form was put down to the fact he was always coming back from a long injury lay off so he was never really in the first team long enough for people to say for sure whether he was any good. But it turns out – the injuries weren’t to blame, he just isn’t very good. Then that summer when we had the mass exodus with Fabregas, Nasri.. etc all leaving, he was able to use that situation… Read more »

He’s never been better than Gervinho was his last season for us. The fact he’s english kept him here this long.

except when he’s been on a contract year

I can see him being moved on in January. It’s not like Wenger to not use him at least as a sub in prem games. He’s hardly gotten a kick in the PL and I hope he gets moved on in January. Quite frankly, I’d rather see Nelson or Wilshere play in one of the more forward positions Walcott plays in. Not to mention Iwobi and Welbeck are still ahead of him in the pecking order for those positions.

Adios Walcott, your free ride is over. Who ever said there was no such thing as a free meal?

I’d be surprised to see him go in January because the sort of clubs that would be interested in buying him aren’t going to really be able to afford him. I also think January would be too risky to move on a player that does have a knack of scoring goals. So he is still useful for those sort of early round FA cups games, and other cup competitions where we are 9 times out of 10 going to be playing lower league opposition. But for the vast majority of Premier League fixtures he is fairly useless because he just… Read more »

The issue is more how to sell him.

Wenger may well want to release him but he’s on contract and there are very few takers for the salary he’s on.

Too easy to just knee jerk blame manager and club.

Good.
Sell him in January FFS

well then…there is literally no point to Walcott being at arsenal then.

I’d like to see Macey start in goal, especially if the rumours of Ospina leaving in January are true.

Would like to see Nelson given a go in the front 3 to see what impact he has. Whilst leaning more defensively will be useful to him, I hope he pushed into a wing back role too long to see if he can make it as an offensive player. AMN could then play on the right where he is more comfortable

I don’t think playing at wingback weakens his development as an offensive player only adds more completeness to his game, so when played further forward he can defend from the front. I wouldn’t want to play him at wingback against a stronger opponent where he might lose confidence if he plays badly though. I would rather have Nkeitah or Akpom a chance in Walcott’s absence.

I guess he found that it wasn’t a position where he could show his world – class diving skills.

I’d like to see Debuchy give RWB a go in this game and to push Nelson further forward. I’d rather our backup to Bellerin was a defender than an attacker, so it would be good to see whether he can do so/give him some experience of the role. Plus it has the benefit of allowing Nelson to play further forward, as you’ve suggested.

Who would you have at LWB if you’re putting AMN on the right? Da Silva, perhaps?

Agree with all of that. Have we not got a promising actual left back (or right back for that matter) in the youth or under 23s that we could play there instead of trying to fit square pegs into round holes all the time ?

after winterburn, we used to have ready-made left backs ready to step up and they all play alike 🙂

Knew that question was coming. I don’t really mind since not an obvious choice, would just rather nelson and AMN played in more natural positions. Perhaps Coquelin or even welbeck could do a job there since it’s more about minutes for them than development/proving themselves

Can I upvote so much that it will happen?

Blogs, while I am well aware that society dictates that I should probably take to Twitter and call you ‘a total Irish tospot, who has potatos for brains because you only eat potatos’ , I shall refrain. However I did find a certain irony in the fact that while discussing how football journalists can’t be held to the same standards you are as a guy writing about Arsenal most of the time, neither yourself nor James knew that Walcott was sick for the spuds game. I am certain I read as much on the beeb the morning of the game.

They said it in the build up on Sky, apparently, but as I was unwilling to subject myself to that shite I remained very much in the dark 😉

Good. Now play Nelson there and somebody else at wing back.

Theo has had everything in his locker (besides a decent first touch) to succeed at Arsenal and the platform to do so. Personally I have always supported him through his setbacks and countless injuries that have undoubtedly hampered his progress over the years, however the thing that is missing from his game is simple. It has nothing to do with the above and it sadly has been missing throughout his whole career. ‘Balls and agression’ To put it bluntly he is a pu$$y. He always has and always will be. He’ll always score a few and stretch teams with his… Read more »

I know it sounds proper ‘ard to say “balls and aggression”, but he howed that for a short period. Improved a bit, but that was it.

He’s an excellent player who has suffered heavily with the following: Weight of expectation Persistent injuries Often (not always) unwarranted scapegoating from our fans. He’s played with a monkey on his back for years. He’s only human after all, who can blame him for a lack of confidence? When on form he has been superb for us and looked like a world beater. When out of form he’s looked invisible. Never disinterested, just devoid of all confidence. I understand that this will be beyond some people’s grasp. It’s just sad that our own fans have contributed to the ruination of… Read more »

Kwame Ampadu Down
Reply to  Danny

While you’re at it Danny why don’t you blame arsenal fans for shooting JFK & faking the moon landing, you blame them for everything else it seems. I like Theo. He seems like a really nice lad & I think he works a lot harder than some him credit for…..but he hasn’t progressed to the top level for a very simple reason : he simply doesn’t have the requisite footballing intelligence. It really is that simple. Games often pass him by cos he just doesn’t see situations arising the way top players do. Blaming the fans for that is utter… Read more »

Danny
Reply to  Kwame Ampadu Down

And Mesut Ozil gave him the gun!

A P
Reply to  Danny

That’s just before Özil faked his own death at Ferrari.

Has anyone checked to make sure Theo didn’t just hold the thermometer over a light bulb?

I’d go with this XI:

Maybe Da Silva in place of AMN, AMN as a sub later on in a DM role and a 5-3-2 formation with Eddie and Welbeck up top and Nelson as CAM?

I just don’t see any future for Theo.

His pace will wane and his game has not exactly matured into something more nuanced.

Better to make room for Reiss.

I would personally like us to get Mahrez in even if we were to push young Reid’s or Nketiah up the ranks and even if we say bring a Lemar or Draxler in for Sanchez.

The rest of the league has caught up with better distribution of tv money and we have 4 or 5 serious competitors now no longer allergic to foreign talent.

Good news, now we can start players who have a future at the club.

Presuming Ospina and Giroud are fit.

Eddie can come in for Welbz or Giroud later.