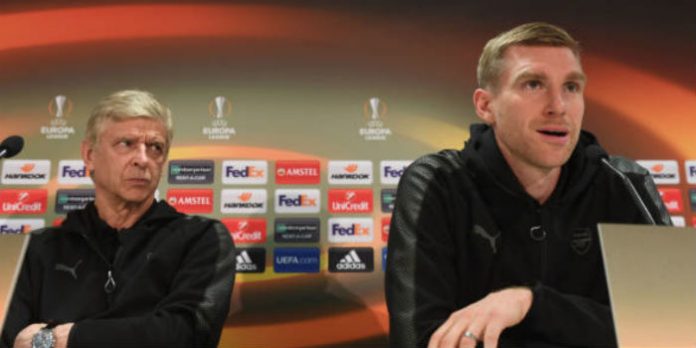 Per Mertesacker says Arsenal’s 2-0 win over Sp*rs last Saturday is indicative of what the players and supporters can achieve together when they pull in the same direction.

The Gunners were roared to derby day success by a vociferous Emirates crowd who enjoyed feeding off one of the club’s best Premier League performances of the calendar year.

Speaking in Germany ahead of Thursday’s Europa League with Cologne, Mertesacker also underlined that the victory should be a blueprint for future performances.

“I think it was a brilliant example of us bringing it all – fans and players together,” he said.

“It was a great atmosphere and lovely to see how we were together in every single situation. Even in the stands, on the bench or actually on the field, we seemed to be together.

“The intensity was great from the start and I think it is human on those occasions that we give 20 per cent more. I think it is like that.

“But we want to reproduce, especially on Thursday. They set a good example for us, those players who came in. We saw that intensity and to repeat that tomorrow and Sunday will be a big, big challenge for us. But we embrace it.”

Headline needs some commas. I misread that completely. I was thinking who the hell are “Sp*rs United” and why are we beating their fans and players?

“Spurs United”, a combination of the two most annoying words ever

I’m against beating other people, but in the case of Spurs United’s fans and players I am willing to make an exception.

There’s probably some total monster floating around out there with a half Spurs half United shirt.

I want them to do the same in the league over the next 3 matches, all of which are likely to be tough and get three wins. It’d be rubbish to beat Spurs then have, say, a loss and a draw in the next three matches. It would mean Alan Shearer is right.

Till the next ‘crisis’…at least.

Negativity even before it happens. Not looking forward to it. Most fans will cheer for the team if they are playing well on the pitch and otherwise when the team is not performing. What most fans do not know is, the team needs the crowd fans to shout and cheer for them to get their form back during the match. Remember Red Star Belgrade fans?

Husker You
Reply to  Ivan Parasite

On the plus side, that must be Santori’s shortest ever post… if it is the fabled ‘Santori of the very long posts’.

I know we all love Per, but I think Thursday might be a bit early in the relationship to reproduce. He’s not even taken us out to dinner yet.

Still, if that’s what it takes to ensure our future supply of magnificent defenders…

He’s been around since 2011 and stayed calm, classy and kind all the way. If we like him, that should be enough to go to the next level, shouldn’t it?

So our guys only give 80% on match days? That explains the poor results.

I like the picture.
Per is talking with confidence, looking at the audience straight and with a smile.
And Arsene listening focused on Per’s words – this shows the respect that the manager has for his captain.

I kind of can imagine Per taking over the club after some years.

Wise words from the BFG. Even wiser to leave aside the fact the fans slipped up when Coquelin came on and started booing like idiots. Positive vibes only from now on. The players have to ignore BS like that from our own and concentrate on the game. It is the only way unfortunately as idiots will still boo given the chance.