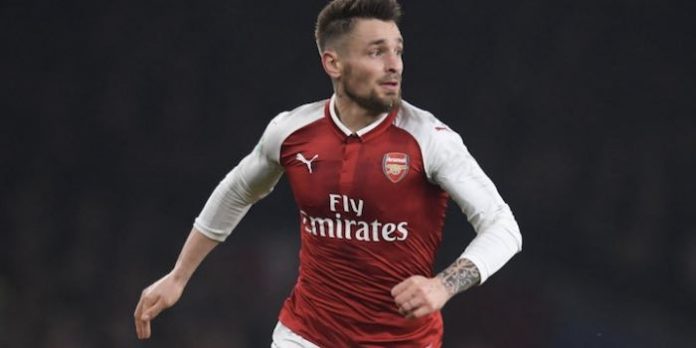 Saint-Etienne are in discussions with Mathieu Debuchy over a potential move back to Ligue 1, according to French outlet TF1.

The 32 year old made clear his desire to leave the club during this window, saying last month, “I want to leave, to find a new challenge in January.

“We’ll see if there are good opportunities in the transfer window. I’m open.”

The former France international signed a 5 year deal when he joined the club from Newcastle in the summer of 2014, but after a bright start to his career suffered two serious injuries in his first season.

That opened the door for Hector Bellerin who has remained first choice ever since. Debuchy did have a loan spell with Bordeaux, but was plagued by injury again last season, playing just 16 minutes in the entire campaign.

This season he has made eight appearances but none in the Premier League, and Arsenal will not stand in the way of a move this month.

It’s the latest potential departure with Theo Walcott and Alexis Sanchez probably on the way out, while reports of Arsenal’s interest in Pierre-Emerick Aubameyang is being widely reported this evening.

Time to go Mathieu. Would be good to have decent back-up for Hector though.

Wood be good to have decent right back, period.

He shifts to Rback on his natural side.

forget trying to confuse him with swapping him into midfield. He will become the next Chambers, confused and career retarded.

Left side has Monreal for Kolasinac.

There goes our only backup to Bellerin. Does Wenger have a replacement targeted? Probably not. He’ll just use Maitland-Niles there and talk more crap about how important playing out of position is for his development.

Yeah, defend the guy that wanted to move but only if a club paid him silly wages

It’s not his fault Arsenal offered him silly wages

He is naturally right sided. Shift him over.

Amazing how he went for one of the best fullbacks in the league, France’s first choice, initially filling a Sagna shaped hole nicely then an injury, a petulant shove, a bust up and it’s like what the f*ck just happened and he’s wasted the best years of his career

I’ve always felt sorry for him and I still tell anyone who will listen what a prick Arnautovic is.

He did not apply himself sufficiently

Please take xhaka and walcott with you

No one wants him is the problem. Can’t sell. Worthless.

No need for the poo ometer here, this one’s a goer

Get out while you still can Mathieu

Send Wenger with him

Had the potential to be a really good signing but then came the injuries. Don’t condone his attitude when he was on his way back and couldn’t get a game but he’s a professional & wanted to play, was probably just frustrated.
We’re certainly emptying out a lot of players, freeing up a lot of wages, so here’s hoping some quality signings are on their way!!

All these player stories coming out straight after another humiliation. Distracting the fans?

You old cynic! The arsenal wouldn’t do that would they? ?

No. The transfer window’s open

Don’t really care…a small part player on a badly out of form side. You’ve wanted out for two years now Matthieu…lower your wages and you’ll get out. Guess you don’t want out that badly.

I have a feeling that Theo will be still an Arsenal player come the end of January.

I have a feeling that the main problem in the squad (other then inept management) has been between Theo and Sanchez…..so once Sanchez goes I fully expect Theo to ‘sign da ting’ and finally (hopefully) fulfill his potential

Don’t let the door hit you on the way out, Mr debuchy, and thanks for the wonderful display in the FA cup last round… It’s reminded us why you lost your place to bellerin in the first place.

He lost his place to Bellerin because of injury not performance

Have you watched him play since his return from injury? Might have opened the door for bellerin, but debuchy cannot maintain a position, is routinely beaten for pace, and he’s always storming up the right trying to score and often gets in the way of the right sided forward player. Because of this, he leaves the right sided center back to play 2 positions, meaning we have a wide open area for the opposition to attack. I’d advise you to go back and watch the FA cup match against forest if you need clear examples of this.

Defender at Arsenal begins showing form; wenger doesn’t play him when 3 of our first choice defenders are out injured… Good luck to him. Arsene seems to have treated him like dirt.

I’m not sure he was treated like dirt, but I do agree he could have been played more to give Hector a break once in a while.

Sell. And sell Elneny too.

Let’s hope this happens and that it all works out for him. He deserves a break.

So many departing players…really do struggle to understand what Mr Wenger is thinking lately. Guess we will find out soon enough. Bad times

It’s a sign of the state of things that I no longer think “Why not stay and fight for a place – this is Arsenal!” – when I see someone wanting to leave, I’m thinking “I’d do the same if worked in that office”.
Imagine having talks with a player we want to sign. What the hell would you tell him?
I used to be proud that there was an Arsenal way of doing things. There kinda still is. It’s just really embarrassing.

Sell even if for 5m. He has been a poor buy for 12m. Granted blighted by injury (who would think the Arsenal and injury prone) but he has not applied himself enough to compete with Bellerin. When he leaves, shuffle AMN to right (natural) side to compete with Bellerin. Forget about trying to introduce a new role to AMN. He is just getting to grips with fullback and you want to make him the next Chambers. Wenger embarked on a foolish program to convert Calum who impressed as a Rback for Soton so much that we bought him, into first… Read more »